CONNECTED: Jewish service members join together to engage in prayer while deployed in Afghanistan in 2018. U.S. Army chaplain Rabbi David Becker, left, led services for the soldiers, including U.S. Army Maj. Moses Scheinfeld, second from left; both live in Los Angeles. “I try to lift them up,” said Rabbi Becker, who taught at Shalhevet. “It’s a very difficult time in a soldier’s or military member’s life to be deployed so far from home and everything they know.” (Photo Courtesy of Rabbi David Becker)

CONNECTED: Jewish service members join together to engage in prayer while deployed in Afghanistan in 2018. U.S. Army chaplain Rabbi David Becker, left, led services for the soldiers, including U.S. Army Maj. Moses Scheinfeld, second from left; both live in Los Angeles. “I try to lift them up,” said Rabbi Becker, who taught at Shalhevet. “It’s a very difficult time in a soldier’s or military member’s life to be deployed so far from home and everything they know.”

Watching with the rest of America as the Taliban swiftly took over Afghanistan last month were two members of Los Angeles’s Orthodox Jewish community who are currently on active duty in the U.S. Army.

Major Moses Scheinfeld and Army chaplain Rabbi David Becker were stationed in Afghanistan during 2018 and 2019, as U.S. forces worked for 20 years to strengthen the Afghani military to protect their country against terrorist groups.

Watching in Los Angeles, Maj. Scheinfeld, who served as Chief of Operations, said the Americans would have needed more time to help the Afghan military prevail against the Taliban on their own.

“We had hoped that we’d done enough to allow the Afghans to defend their own country, but apparently it was not enough, so that’s a tragedy for everyone,” said Major Scheinfeld on Aug. 30. “And that was our hope — that they would be able to stand on their own feet.”

The United States went to war in retaliation for the 9/11 attacks in 2001, executed by al Qaeda terrorists based in Afghanistan who were being harbored and protected by the Taliban government.

It was a long, long, day. So you’re very occupied with what you’re doing. You don’t have a lot of time to think, and when you get back to your room, you’re exhausted.”

In 2002, President George W. Bush called for a new plan of action: restabilization of the country under democratic rule. To do so, the U.S. provided military support and guidance so Afghanistan’s new democratic government could eventually attain control on its own — without U.S. help. Two years later, the first democratic elections were held.

The American military campaign lasted another 18 years. But when the final U.S. troops departed in July and August, the government collapsed. The Taliban overtook the capital city of Kabul Aug. 15.

Rabbi Becker — who taught Jewish History, Gemara, Tanach, and Halacha at Shalhevet from 2000 to 2006 —  is worried about the dangers Afghani people now face.

“We tried our best, we did what we could,” said Rabbi Becker in an interview Sept. 1. “I met Afghanis there. They were delightful people, and of course, I’m sorry to see them now at the mercy of potentially very hostile forces.”

Maj. Scheinfeld is Future Operations Chief in the 40th Infantry Division of California’s National Guard, meaning he plans and then executes missions expected 30 days to a year away. Currently in line for promotion to Lieutenant Colonel, he described his time in Afghanistan as full of hope and heartbreak.

In Afghanistan, he was stationed at an airbase in Kandahar, where he was involved in coordinating air support for ground operations, using fixed-wing airplanes, helicopters and drones — all to assist the Afghan military forces in their fight against the Taliban.

He usually worked 13 to 16 hours a day, and at times even 20 hours. That left him without much time to reflect on his experience while he was there.

“It was a long, long, day,” Maj. Scheinfeld said. “So you’re very occupied with what you’re doing. You don’t have a lot of time to think, and when you get back to your room, you’re exhausted.”

When he wasn’t working, he spent his time reading, watching movies and exercising.

Around the base, he said, the threat of rocket or mortar attack always loomed.

“A few times we were rocketed,” Maj. Scheinfeld said. “When you were outside, you always walked around with your body armor and a loaded weapon. I always had a loaded weapon with me just in case.” It was a long, long, day. So you’re very occupied with what you’re doing. You don’t have a lot of time to think, and when you get back to your room, you’re exhausted.

He worked with fellow officers coordinating Afghani troop support and was invested in their long-term success.

“I’m very proud of what we did there,” he said. “I mean, we really made a difference and the Afghans we worked with were very brave.”

One person he remarked on was General Abdul Raziq Achakzai, a chief of the Afghan National Police.

“He was more or less our chief ally in Kandahar, and he was a very smart guy,” said Major Scheinfeld. “But the Taliban tried to kill him many times. On October 18, 2018, when I was there, they finally assassinated him.”

Although imperfect, according to Maj. Scheinfeld, the general had a strong presence in Kandahar and kept the Taliban out of the city.

There was another general Maj. Scheinfeld was friendly with, whose name he did not share.

Rabbi Becker said a military chaplain “is like a rabbi, but it’s not — it’s more than a rabbi.”

“It’s a person who does counseling and social engagements and prayers, spiritual care, dealing with people who are wounded, ill, sad or in need of a shoulder,” Rabbi Becker said.

He was sent to Afghanistan to be a rabbi for Jewish people who were deployed, running prayer services, celebrating and learning Torah with them, and more.

“I try to lift them up,” said Rabbi Becker of his role in Afghanistan. “It’s a very difficult time in a soldier’s or military member’s life to be deployed so far from home and everything they know.”

Their prayer services were more “straightforward,” he said; they wouldn’t say every prayer, but they would share what he called “explanatory minyanim.”  They could only say prayers like the Barchu or Kaddish when they had a full minyan, which was not often.

“[The services are] really specific and geared towards fulfilling that heritage — that special feeling that they may need or have up to really fill their hearts with joy and spirituality and happiness,” he said. “Lots of singing, lots of dancing… really bringing that feeling of Judaism to them.”

At Shalhevet, Rabbi Becker also served as the Judaic department chair in his last year and as an assistant student activities coordinator.

He officially joined the military in 2015 to support the Jewish people serving and be there for them as a spiritual care advisor, he said.

In Afghanistan, he provided counseling for family challenges and marriage issues along with financial and crisis counseling and especially counseling for different types of loss, including the loss of a loved one or a loss of faith, along with connection to religion and self-improvement.

“When you’re on deployment, all sorts of challenges come up for the soldiers,” said Rabbi Becker. “Pretty much anything becomes exacerbated because you’re so far away from home.”

Maj. Scheinfeld’s military career has already spanned 30 years, starting when he graduated from Rice University in Houston, Texas, where he was commissioned to be an Army officer.

He said he was influenced by the Jewish value of hakarat hatov, or gratefulness.

“It means expressing gratitude,” explained Major Scheinfeld. “My hakarat hatov to this country, which has been so wonderful to us as Jews and as the Jewish people, was to join the military and participate in the defense of our great country.”

In Afghanistan, he stayed true to his Judaism by eating vegetarian to keep kosher and by davening daily.

He made a commitment to study Pirkei Avot, a Jewish text, every night to stay connected to Torah — even after 16-hour workdays.

“My name is a distinctively Jewish name,” he said, “so people would ask me questions about Judaism and I’d always engage them in conversation and answer their questions.”

At home, he and his wife have three children, two children at Harkham Hillel Hebrew Academy and one at YULA. In 2019, he surprised his children by returning from Afghanistan during a Purim celebration at Hillel.

In a video that was later uploaded to Facebook, he was introduced as a “modern-day current Mordechai.” His kids then jumped up and ran to hug him as he walked in, shedding tears as he wrapped his arms around them.

Now 7,718-miles from Afghanistan, Rabbi Becker and Maj. Scheinfeld have returned to their roots in Los Angeles with their family and friends in the Jewish community — roots that for both of them grew into a desire to serve, which wasn’t always easy.

Rabbi Becker now serves in California as a United States Guardsman in the role of chaplain, and lives with his wife and two sons in Valley Village.

Despite the distance, he feels that Los Angeles’s Jewish community should be thoughtful about the events occurring abroad because of the Jewish value of kol Yisrael arevim zeh la-zeh.

“Every Jewish person should take responsibility for someone else,” Rabbi Becker translated. “And certainly by extension, a Jewish person should care about what goes on in the world. And when people are in pain and suffering, then we should, if we are capable and able, we should try to help them.”

Among the things that Rabbi Becker and Maj. Scheinfeld watched from the U.S. last month was the suicide bombing at the Kabul airport on Aug. 26, costing 13 U.S. servicemembers their lives.

Ten of the victims were trained and deployed from Camp Pendleton, located in northern San Diego County.

Rabbi Becker and Maj. Scheinfeld were never stationed at Camp Pendleton and did not personally know any of the victims.

However, the death of these soldiers weighed heavily upon Rabbi Becker. The soldiers were there to do a good deed, he said — evacuate and save Americans and Afghani compatriots from the Taliban.

“This type of mission was to save and to help and to assist, and that’s particularly hurtful to me that they died in that way,” said Rabbi Becker.

Maj. Scheinfeld recalls visiting Camp Pendleton many times in the past.

“The Marines were the best hosts,” said Major Scheinfeld. “They helped us with our training and they were just great to work with.”

This attack was the deadliest for U.S. forces in Afghanistan since Aug. 6, 2011, when 30 American service members were killed when their helicopter was shot down.

More than 100 Afghan people were killed in last month’s airport bombing, and others are desperate to flee as the threat of Taliban rule. Videos of Afghan people clinging to airplanes in an attempt to escape Taliban rule went viral online on Aug. 16, the day after Kabul fell.

Major Scheinfeld saw the U.S.’s mission as an altruistic one to assist and has no regrets.

“We were there to help them,” said Major Scheinfeld. “Not to take anything from them, but only to help them be a better military.

“Everyone always gave 100% to assist the Afghan military as best as we could.” 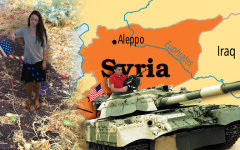 How should the US respond to ISIS? 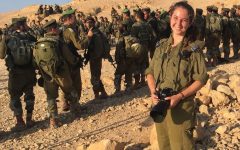 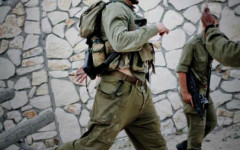 Alumni live, learn and serve amid terror in Israel