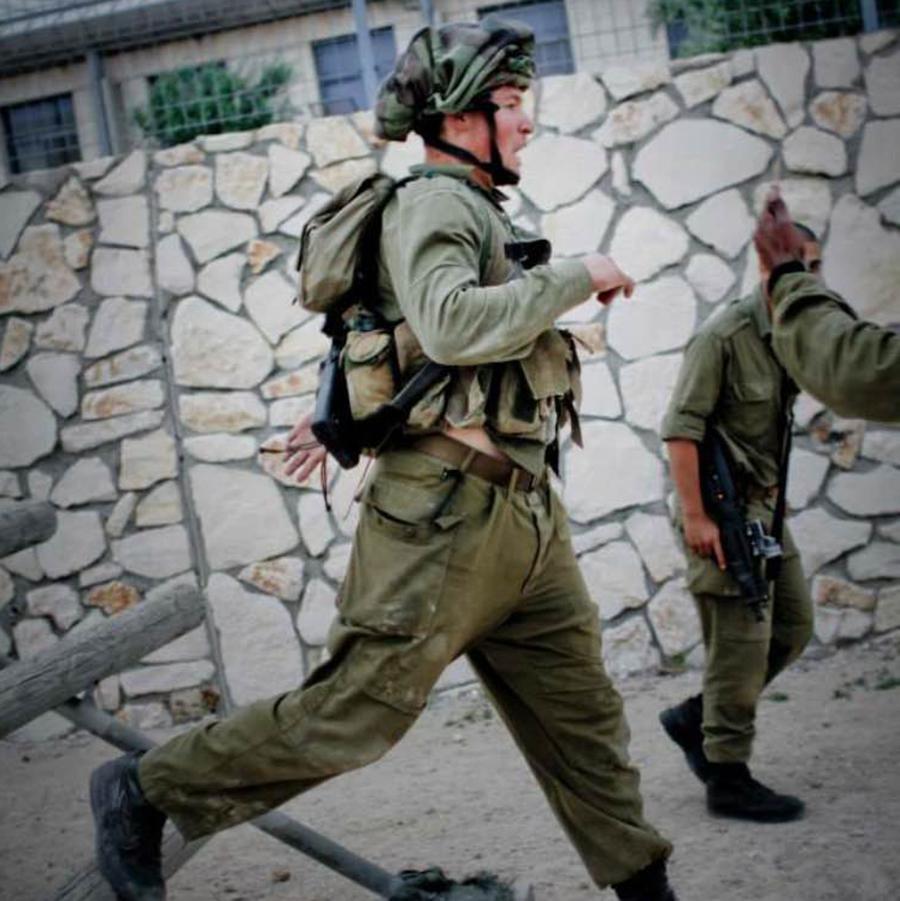 PROTECT: Since September, IDF soldier Saul Rothman ‘11 has been guarding Israeli bus stations instead of the border. His training, shown here, has been interrupted by the spate of stabbings and car rammings. (Courtesy of Saul Rothman)

PROTECT: Since September, IDF soldier Saul Rothman ‘11 has been guarding Israeli bus stations instead of the border. His training, shown here, has been interrupted by the spate of stabbings and car rammings.

Alumni live, learn and serve amid terror in Israel

By Elon Glouberman, Outside News Editor

PROTECT: Since September, IDF soldier Saul Rothman ‘11 (above) has been guarding Israeli bus stations instead of the border. His training, shown here, has been interrupted by the spate of stabbings and car rammings.

Blood stains the streets of Jerusalem as IDF soldiers and medical personal tend to victims of terrorist stabbing attacks.  During what has been colloquially called a “Third intifada,” public street stabbings shootings and car have become somewhat of a regular occurrence in Israel.

According to the Israel Ministry of Foreign Affairs, between Oct. 1 and Nov. 2,11  Israelis were killed and 153 wounded. For comparison, during the entire Gaza War in 2014, seven Israeli civilians along with 66 Israeli soldiers. About 2,100 Palestinians were killed in the Gaza Strip, alone, according to BBC News.

During the week ending Nov. 8, six Israelis were wounded in the West Bank after a pair of stabbing and car-ramming assaults, as stated by Haaretz. One Israeli security guard was stabbed at the gate of the Beitar Illit settlement by a female assailant, four were wounded by a car-ramming attacker at Tapuach Junction, and a 50-year-old Israeli was was seriously injured after being stabbed in his car near the village of Nabi Elias.

In addition to the tragedies themselves, another result has been a dramatic change in daily life for Israelis, ranging from IDF soldiers and ordinary citizens to visitors like Shalhevet alumni there for their gap year programs.  It’s partly behaviors and partly feelings.

Alumna Alexa Fishman ’15 who attends Midreshet Lindembaum in the Talpiyot neighborhood of Jerusalem, said she no longer feels safe.

“I don’t,” Alexa said in an interview. “It has become this thing where we racial profile everyone we see.  We’re always paranoid, and if we see someone coming toward us in the street, we cross the street.”

Alumna Goldie Fields ‘15, who attends Kivunim, a program which is based in Jerusalem but visits Jewish communities in other countries, said she is not allowed to go to certain areas.

“Normally, if there wouldn’t have been attacks, we could go out freely in Jerusalem and do what we want,” Goldie said. “[Now] there are only a few places we can go to, and we have to be careful about it.”

Goldie and her classmates, including Nicole Feder, Sara Sobolev and Daniel Steinberg, all ’15, are not allowed to use buses or public railway services. Instead, they must either call a private taxi service or walk, if the distance is not too far.  And a trip to Turkey was cancelled; the group will go to Greece instead.

Most observers say the recent attacks are a result of Palestinians’ fear that Israel will change the status quo of the Temple Mount, where the Al Aqsa Mosque and Dome of the Rock Muslim holy sites are located.

While those sanctuaries have been sealed off to non-Muslim prayer since 1967, a group of religious Jews ascended the mount during the High Holidays, and Jewish politicians have visited the site, among them Agriculture Ministers Uri Ariel,who supports the right of Jews to pray on the Temple Mount, and Knesset member Moti Yogev, according to Times of Israel.

As Palestinian anger has risen and civilians have become targets, yeshivas and seminaries have reacted, as have the IDF and universities. Shabbatonim have been cancelled and students have not been allowed to visit certain cities or use public transportation.

In Tel Aviv, at Bar Ilan University, Shalhevet alumnus Adam Kaufler ‘15 is not permitted to leave the small neighborhood of Ramat Efal where he lives. The restriction was lifted about a week after the first stabbings, however, and as of now students need consent only to visit Jerusalem or Judea and Samaria (the West Bank).

In Alon Shvut near Efrat, Mati Hurwitz ‘15 attends Yeshivat Har Etzion, which has been on lockdown since the initial attacks, though students now may leave the campus with permission from a counselor.

“I think that the word ‘lockdown’ makes people more afraid than they need to be,” said Mati in an interview.  “I’m not afraid of this really small chance of getting injured. I’m not trying to minimize any of the tragedies that happened, but I’m just not living in fear. If you live in fear you let them win.”

Although he understands why his school has taken measures to make sure that the kids are safe, he’s bothered by the fact that they leave very little freedom to leave campus, especially on Fridays.

“I’d go to Jerusalem, I’d go hang out with friends, I’d coach my friend’s football team, go to the shuk [market] and buy stuff before Shabbat,” Mati said. “Because Gush is a little far away, a little removed from everything, it’s just a change of atmosphere, which is very necessary after a long day of learning.”

Changes of the opposite variety have come to the IDF, where soldiers are being sent into more dangerous areas to protect the population. Alumnus Saul Rothman ‘11, brother of senior Noah Rothman, serves in the Golani Brigade.

Saul was taken out of his army training program to guard bus stations, mainly in Jerusalem and places with dense populations, looking out for people who might be planning a terror or stabbing attack.

“We were in the middle of an anti-terror course, and they took us out of it and we have been doing duty on buses in Jerusalem for the past few weeks,” Saul said in an interview with Boiling Point.

“So they gave us a course to teach us really fast. When we see someone that we think is suspicious, we take them aside and we’ll question them, look for signs in their body language and search them. Usually they are easy to spot.”

Saul is frustrated because the army extended his Golani training an extra month, and believes he is playing the role of a policeman, not an IDF soldier.

“The problem is that we’re not trained to interrogate people as policemen, we’re trained for war,” said Saul, “It’s a really bad situation because they’re taking soldiers and commanders from the armies to guard bus stops, or anywhere there is a dense population of people in order to stop stabbing attacks.”

But Saul also credits Israel for doing whatever it can to protect its citizens. He explains that the fact that soldiers who should be stationed near Syria are protecting citizens on buses demonstrates how far Israel goes to ensure the safety of its people.

“Without a doubt, 100 percent I feel safe,” Saul said. “I have always felt safe here. My unit is just as relaxed as always and we joke around just the same as we did before the attacks started happening.”

Alumnus Daniel Bain ’08 also lives in Israel, though he is not officially a citizen of the country. He lives in Givat Shmuel and commutes to Tel Aviv for work during the week at a startup doing marketing and Search Engine Optimization (SEO).

“The main change in my daily routine is that I try to not use my phone or listen to music when I am walking to or waiting for a bus,” said Daniel in a phone interview. “There’s a conscious effort to not let it affect our daily lives, but people are still more cautious and aware of their surroundings than usual.”

He says that some days are worse than others, and if there is an attack on any given day, Israelis are a bit saddened, but have become so accustomed to the heavy flow of attacks. He said the attacks have made times a little tense, but his day-to-day schedule has not been affected.

“The atmosphere is still somewhat tense, but life goes on,” Daniel said. “The mood at the office can be a little somber each time the news breaks, but overall Israelis are very resilient. Unfortunately, this is something they have experience with and have just gotten used to living with, but they don’t let it get in the way of living normal lives. ”

The worst days for Daniel are when attacks occur in Raanana, where his parents and brothers live.

“There was one day where there were I think five attacks before noon, including a bus shooting in Jerusalem and two stabbings in Raanana near where my family lives,” Daniel said. ““First thing I did was called my family to make sure everyone was okay and reiterated to everyone to be careful and alert. After that, there’s not much more you can do.”

The latest wave of violence started Sept. 27 when protestors on the Temple Mount and barricaded themselves there, according to Israel Ministry of Foreign Affairs. Israeli police countered with stun grenades and tear gas, and even charged the Temple Mount to stop some of the violence.

Several Israelis were injured and many Palestinians were arrested. Since the Temple Mount is such an important religious site for Palestinians, wider unrest was set off with more riots throughout Israel and multiple stabbings and attacks during the last few months, starting in September.

Alexa, Goldie, Adam and Mati all said that even though they are there at a dangerous time, they were still glad they were there.

“I’m still enjoying myself, but not nearly as much as before this was happening,” Alexa said. “I’m kind of used to being carefree and fun and independent and doing your own thing, but now you have to think twice about every plan you make and places you go.”