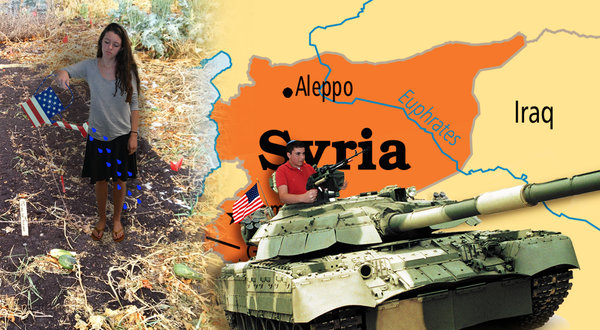 How should the US respond to ISIS?

Middle Eastern current events are always fascinating; issues date back thousands of years, yet the situation is ever-changing. Constant new occurrences keep the rest of the world on its toes.

Now we have ISIS – the so-called Islamic State in Iraq and Syria – which has gained notoreity through publicizing their actions themselves; they have released videos of beheading and openly threaten America.

In this case, ISIS is very obviously not the Egyptian goddess who befriended slaves, sinners, and the downtrodden.` Rather it is a barbarically aggressive group that says it will not stop until its thirst for blood is quenched.

The United States is a superpower and when international problems arise, American involvement is expected. President Obama has therefore said the U.S. will act to “degrade and destroy so it is no longer a threat not just to Iraq but also the region and to the United States.”

But what he has actually done has spoken differently, and has set the correct course for American involvement and interests.  What he has done has been to use airstrikes to attack military convoys and artillery units within this Middle Eastern region belonging to ISIS.  Except for the aid workers and journalists who seem to be ISIS’ favored victims, there have been no U.S. casualties.

Airstrikes can contain this horrible situation and keep it from worsening, and for now, this is the best that can be expected. Previous wars in Afghanistan and Iraq have shown that America does not have the power to influence significant political change in the Middle East. The Middle East lacks political structure and it would be very foolish to over-involve ourselves by watering a dead flower.

It is true that the use of airstrikes as the use of missiles can only go so far. Many want boots on the ground, however there already are — just not American boots. As I write this, Kurdish forces entering Syria, and the Kurds – who are also very pro-Western — are fighting for their own region. Kurds from Syria, Turkey, and Iraq have created an alliance to rescue thousands of people and have taken the first steps in attacking ISIS.

Action is being taken. Whereas sending our own troops on the ground would be disastrous, the Kurdish forces are uniquely fitted to fight this war because they are native to the region. They can carry out massive infantry operations without causing the havoc we certainly would, as they are defending their homes. We should continue to support the Kurds with airstrikes and drops of supplies.

Also, to actually destroy ISIS would be far harder than we’d like to think; al-Qaeda has been in existence for much longer, and its operatives are still on their feet after multiple wars with the United States.

It is impossible to solve the quickly growing problem of ISIS with the use of airstrikes alone. Missiles can only do so much. ISIS has shown an ability to adapt to these aerial attacks, moving more operations underground or into civilian-populated areas where we cannot ethically reach them.

But the President isn’t being foolish. America does not have the power to influence significant political change in the Middle East. If Obama changed his position on an invasion and started Iraq War II, the results would be disastrous as they were the first time around.

Instead – as he said in the same press conference when he announced his intention to “degrade and destroy” the group — the objective of airstrikes is to “continue to shrink ISIL’s sphere of influence, its effectiveness, its financing, its military capabilities to the point where it is a manageable problem.”

The best and most appropriate action here is to make things difficult for ISIS and keep it from spreading, hoping future stability – whatever that stability turns out to be – will be chosen or found by the people of the area.

What kind of barbarians behead innocent journalists and aid workers? Following the brutal executions of James Foley and Steven Sotloff, President Barack Obama was right to refer to ISIS as a cancer. His goal to eradicate the horrendous terror group is just. A refusal to engage ISIS militarily would be one of the most foolish decisions in world history.

We all know that the beheadings are just the tip of the iceberg. ISIS – the Islamic State of Iraq and Syria — is the perpetrator of countless and countinuing atrocities. So far it has worked to systematically eliminate the non-Muslim ethnic minority known as the Yazidis; organized a failed plan to bomb London; killed thousands of other Muslims of non-Sunni sects; and enslaved — by official policy it says is backed by the Koran – women and girls as concubines to its fighters.

While ISIS hunts Shiite Muslims, Christians, Kurds and Yazidis with special zeal, the group terrorizes everyone it conquers, imposing its so called “religious” values and taking control of huge swaths of land, including the Iraqi province of Anbar and even suburbs of the Baghdad — and despite the airstrikes of a U.S.-led coalition.

For the civilized world to say it’s too busy, or that its own lives are too precious, to stop this barbarity with its own soldiers is to cede its moral authority to ISIS by default. President Obama has said the right things, including that “No God would stand for what they did yesterday and what they do every single day.” But he must now follow these statements with clear action.

New steps must be taken to ensure the security of not only the Middle East but also the wider world. ISIS continues to grow stronger and wealthier and to conquer more territory. It’s time for the U.S. to acknowledge that the status quo isn’t working.

At the very least, immediately we need to drastically increase airstrikes. It that proves ineffective, the United States needs to send in ground forces to prevent ISIS from taking more Iraqi and Syrian land. Troops need to be sent to weak towns and cities that are vulnerable to ISIS, and especially to protect Baghdad, because if Baghdad falls so does Iraq. As much as another war there is undesirable, the world cannot tolerate another unstable and radical state with an objective of destroying the civilized world.

Some argue that we should maintain a stance of neutrality in order to not incite further destabilization of the Middle East. But that would only destabilize the world even further. America is a superpower, and when a superpower ignores situations such as these, it creates a power vacuum in which other powers fester. The Obama administration has done this and we have already seen the consequences. It isn’t a coincidence that Russia has chosen this moment to annex Crimea, or that Boqo Haram enslaved more than 200 girls, or even that Syria’s President Assad used chemical weapons against his own people in the current civil war there. Our enemies are learning that America will sit back in the face of atrocities and do little more than talk and debate.

It’s time to fight. There is no denying that American lives will be lost. But we cannot turn our back on this global crisis merely for self preservation.

American lives were lost fighting in World War I, World War II, the Civil War and even the American Revo`lution. For us to say that we are too weak and we cannot prevail goes against every historical accomplishment not only of the U.S., but of other countries that have prevailed against evil in history.

For every American soldier who gives his life to fight terrorism, he or she saves countless other lives from being taken by ISIS.  Every life is sacred. But that’s exactly why this evil must be stopped.