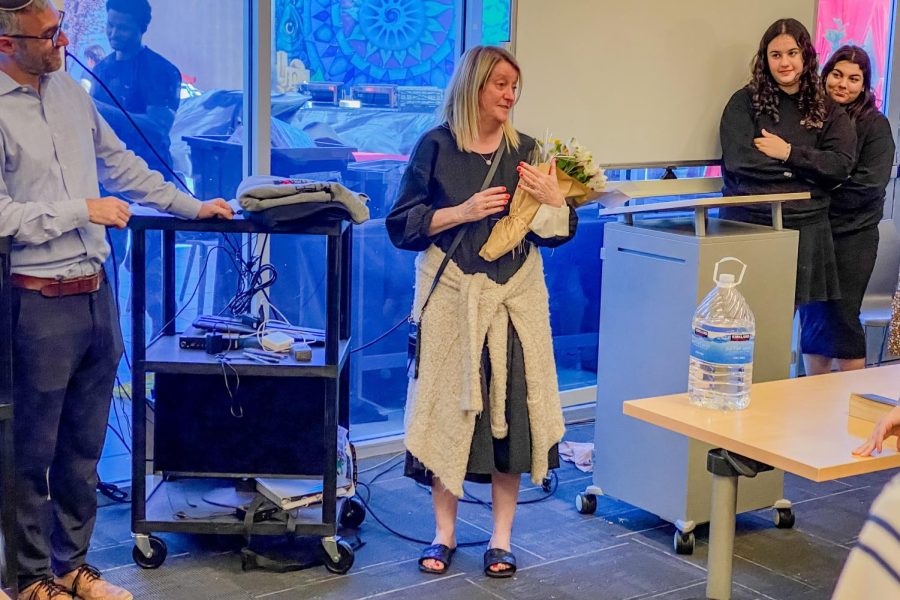 FAREWELL: Mrs. Rabinov received flowers and wishes from students and staff in the Beit Midrash on her last day at Shalhevet June 1.

Mrs. Mickey Rabinov, who for seven years was Hebrew Language Coordinator and was known for her caring presence throughout the school, left Shalhevet and moved back to Israel.

She is now teaching a Hebrew class at Tel Aviv University, but she mainly moved to Israel to spend more time with her family.

“I have a 91-year-old mom that needed me and my sister lost her husband two years ago,” said Mrs. Rabinov in a Zoom meeting this week. “So I moved there because of my family basically.”

Now she lives in Rishon LeZion, which is south of Tel Aviv, but she lived in Haifa before moving to Los Angeles in 1981.

During her seven years at Shalhevet, she taught classes to all four grades including SAS Hebrew Film and Literature, and Honors Hebrew Literature.

When Mrs. Rabinov was first hired as a teacher, Shalhevet was in the Westside Jewish Community Center (JCC). She later traveled with the Shalhevet class of 2018 on the Poland-Israel experience and described that as one of the highlights of her time at Shalhevet.

Mrs. Rabinov said she will miss Friday kumzitz the most. She also said she loved Color War and weekly Town Halls.

From the moment I stepped into Shalhevet I felt [it was] my home.”

Her favorite time of the year was always the first day of school.

“From the moment I stepped into Shalhevet I felt [it was] my home,” said Mrs. Rabinov. “So much love and warmth from Rabbi Segal, from Noam [Weissman, former principal], from the staff, from the students.”

Senior Maayan Mesica, who had Mrs. Rabinov as a teacher beginning in her freshman year through junior year, said that in addition to learning the Hebrew language she gained many life skills.

“A lot of students would be drawn to her,” said Maayan, “and it wasn’t because she taught something different than other teachers, it was because she created this energy that a lot of teachers just didn’t know how to create.”

Before working at Shalhevet Mrs. Rabinov taught at Pressman Academy, which is just a few blocks away from Shalhevet. She also taught at Kadima Day School in West Hills and Beth Hillel in Valley Village, where she received the $15,000 Milken Jewish Educator Award in 2013.

Mrs. Rabinov said receiving the award was a highlight of her teaching career, and that she still has the award sitting on her desk today.

On receiving it, Mrs. Rabinov gave a brief speech to the students and faculty of Beth Hillel expressing her deep thanks and gratitude.

“When I wake up in the morning, even if I’m not feeling well, I’m coming only because of you, because I love doing what I’m doing,” said Mrs. Rabinov in her speech.

[She taught me] to always be nice to anyone you see or encounter in your life, because you don’t know what’s gonna happen in the future.”

One of Mrs. Rabinov’s highest goals was to always build a close relationship with her students and their parents. She said she always wanted to spread positive energy and bring joy to others.

Mrs. Rabinov has also kept in touch with some students since leaving, one of whom is senior Oz Shalom, who had Mrs. Rabinov from the start of ninth grade. Oz spoke on the phone with Mrs. Rabinov the night before the first day of school.“[She taught me] to always be nice to anyone you see or encounter in your life, because you don’t know what’s gonna happen in the future,” said Oz.

Mrs. Rabinov taught the majority of her classes on Zoom last year, as she was in the process of moving back to Israel. Oz said he appreciated her time and effort throughout the year.

“I became very close with her over the three years that she taught us, and I think it’s just important to keep communication because she has done a lot for us,” said Oz.

Now with more time on her hands, Mrs. Rabinov is taking cooking and baking classes, has been spending time with her mother and sister and also enjoys reading. But she said she spends the most time thinking about how much she misses her students.

“I love you all, and I miss you all so much,” said Mrs. Rabinov. “I wish I could stay at Shalhevet for a couple more years.” 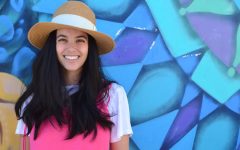 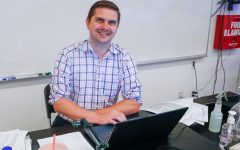 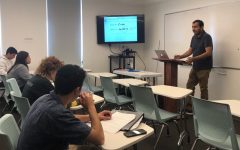 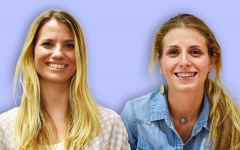 Two members of Shalhevet student support team do not return