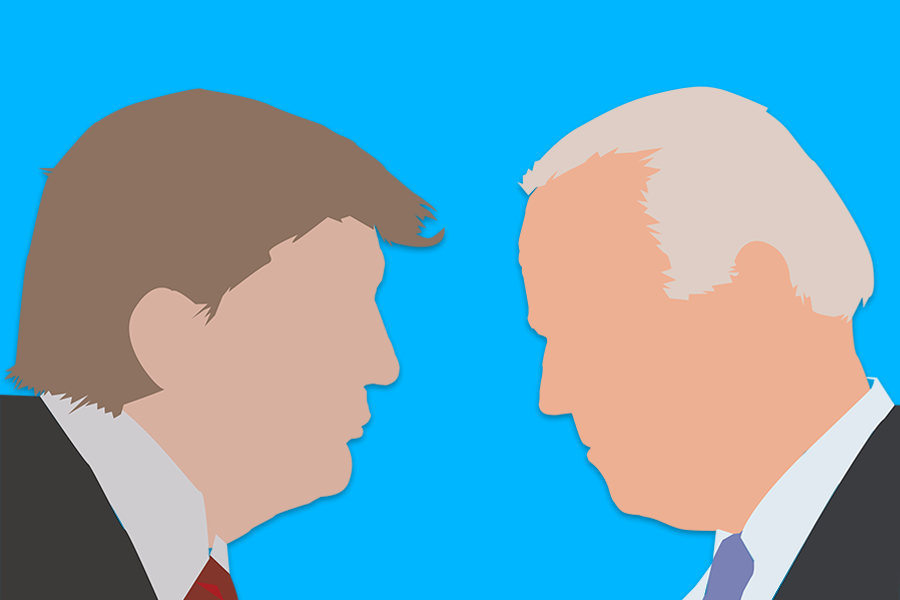 FACEOFF: Four days before the election, President Trump and former Vice President Biden competed in an online poll for the Boiling Point. The results differed by grade. (BP Graphic by Sarah Feuer )

FACEOFF: Four days before the election, President Trump and former Vice President Biden competed in an online poll for the Boiling Point. The results differed by grade.

Favored candidates also differ by grade and separate survey shows parents, friends and social media - in that order - are most common influences

Most students support the president, while most faculty, by a large margin, support his opponent.

Of students polled, however, 51% supported President Trump to 43% for Vice President Biden (71 students to 60).

Among faculty and staff who responded, 77 percent supported Biden and 15 supported Trump (10 staff to 2).

The poll was conducted Oct. 26- 29 via Google Forms. It received 152 responses in all, 139 from students across four grades and 13 from faculty and staff.

It showed President Trump with a three-vote lead over Mr. Biden.

This year’s poll is the third conducted by the Boiling Point in presidential elections. Previous polls did not include faculty and staff.

In 2016, Boiling Point poll results from the student body only looked different, with 29% supporting Hillary Clinton, 26% supporting Donald Trump, 3% supporting Gary Johnson (Libertarian party) and Jill Stein (Green Party). Another  21% — more than one in five — said that if they could vote, they would choose not to. When the poll was conducted, an additional 18% were still undecided, six weeks before the election.

The Boiling Point also surveyed students about where they get their news and how they decide who they support.  Parents, CNN, and friends were the three sources cited most often, followed closely by Fox News, print newspapers, and Instagram.

Answering this question on the survey —  What news sources do you use for getting world and national news?  For example, news about Israel, Covid, government policies and elections.  Check as many as apply. — of 46 students who responded, 29 said their parents played a role as a source for their world and national news — the largest of any single source. Twenty-three students credited their friends.

Junior Barbara Seruya said she’s influenced by her parents political beliefs and said she is okay with that.

“Im fine that they’re influencing me about this, but in a sense I’m also making my own personal beleifs ‘cause I don’t agree with them on everything that they say,” said Barbara.

“Everybody is honestly like the people around us, and what they say always affects you as a person,” she said. “That’s how we create personal biases, [including] who we want to be president.”

Most said they read and watch different news networks or newspapers to get their information.

Twenty-two said they get some of their news from print newspapers.

Senior Rebecca Cohen said she reads the New York Times, Los Angeles Times, Reuters, Bloomberg and other sources, and makes it a point to read more than one source on each topic.

“I really try to make it a priority to look at different news sources, as well as fact-checkers and the original sources,” said Rebecca in an interview. “So if there is a debate I will watch the debate to make sure that I’m not just reading pieces of it, to make sure I’m getting the full story.”

Twenty use Instagram — the third-place finisher — and some who don’t said that was deliberate. Freshman Kyla Zachary said that she watches cable news such as Fox News and CNN and tries to avoid using social media for news.

“Sometimes I find that social media can be extremely biased and unreliable,” said Kyla. “So I try to look for credible professional sources such as Fox News, CNN, various newspapers.”

She watches CNN and Fox News.

“They are the two most popular and can be the two most biased,” she said, “which is why it’s important to look at both of them to compare and contrast their ideologies and interpretations.”

Freshman Tali Liebenthal said that she listens to podcasts and does further research on social media.

“I’ll see stuff on social media, I’ll like know about it, and then I’ll go and like search it up and look it up on news articles to see what it’s about,” said Tali.

Junior Anya Mendelson said that she had not been paying a lot of attention to the election and wished she could learn about it in school — including what news sources to trust.

“I think that’s really important and something that everybody should know,” said Anya, “and I wish there was a specific time given to me so that I could learn about this. Because I don’t really know what resources I should be looking at to learn about it.”

In addition to students being different from faculty, the 2020 Presidential Election Poll conducted by the Boiling Point had different results in different grades.

The 10th grade supported Biden 21-18 with one student supporting another candidate. 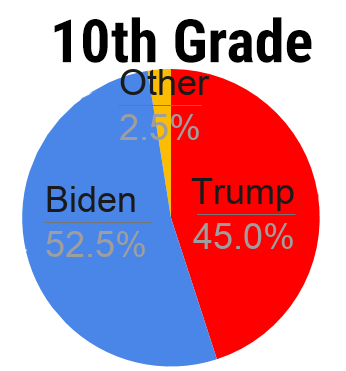 The staff supported Biden 10-2 with one staff member supporting another candidate.

Senior Rebecca Cohen is a part of the minority Biden supporters in the senior class.

“[Biden] has such a strong and well-thought-out plan, that its backed by so many people from not just the Democratic party but from the Republican party also,” said Rebecca, “that I am absolutely confident that he is going to be able to if not completely bring America back from the damage of the last four years, at least take us a step in the right direction.

“I really feel like Trump has done a lot to take away rights from not just minorities but from everybody,” Rebecca said in an interview. “A lot of the hatred and the division in this country right now is perpetuated by him. He encourages it, he is not willing to do what is necessary to keep Americans safe.”

The poll was conducted Oct. 26 – 29. It also asked whether, if they could not vote because of being too young, they wished they could vote this year.