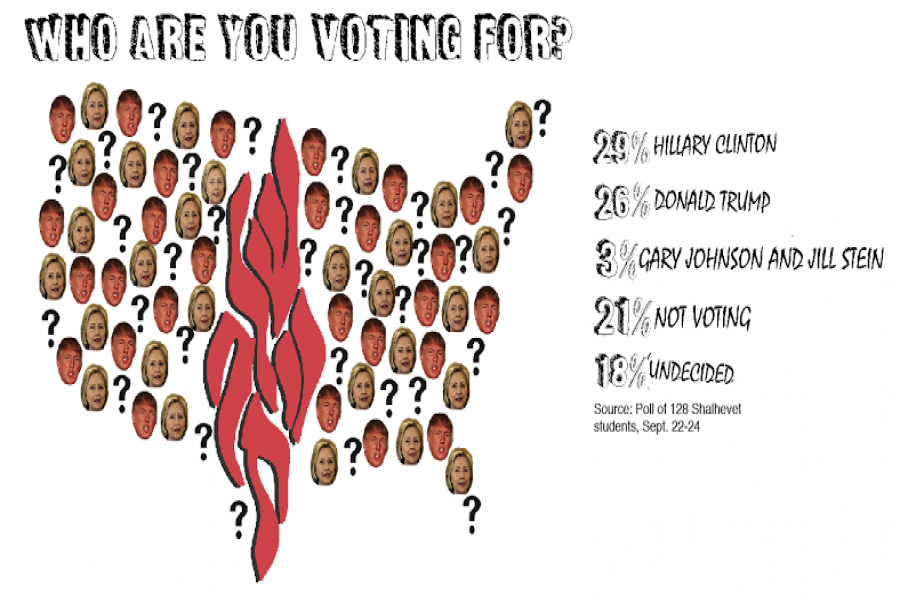 In a recent poll of the Shalhevet student body, 120 students polled were almost evenly split on who they would vote for in the upcoming 2016 presidential election if they were of age.

Most were following their parents’ preferences.  But almost half were not sure how they would vote.

About 30 percent said they would vote for Democratic candidate Hillary Clinton, 26 percent supported Republican Donald Trump, and the Libertarian and Green party candidates Gary Johnson and Jill Stein had 2.5 and 1.6 percent respectively.

But a plurality of students were either undecided or said they would not vote at all.

“I would vote for neither, because Hillary Clinton is not honest and Donald Trump is stupid,” said senior Isaac Goor, representing the views of 20 percent of students in the poll.  Another 18 percent were unsure.

The poll was conducted Sept. 20-22, before the Sept. 26 debate between the two candidates.  After the debate, Mrs. Clinton’s national lead in the poll doubled, from 1.5 percent to 3 percent, according to RealClearPolitics.com.

At Shalhevet, her margin was 3 percent the week before.

The Boiling Point polled Shalhevet students last April as well, although with a much smaller sample size of 60 students, a different student body, and some different candidates. Similar to this poll, Clinton received a higher percentage of votes than Trump, but John Kasich, another Republican candidate at the time, had a one and a half percent more votes than her. Meanwhile, the percentage of students saying they were unsure of who they supported decreased from 38 percent last year to 18 percent this year.

“Hillary stands for social and economic equality,” said senior Layla Galeck. “It would be horrible for Trump to be elected and for him to take America a step back in our fight for equality and acceptance of all people.”

Students’ reasoning for supporting Trump include his national economic plans, along with the support for Israel that he has pledged.

Freshman Adam Tizabi said that he would vote for Donald Trump if he were of age in the upcoming election.

“He supports Israel more, and for me Israel is my top priority,” said Adam.

Talya Ohana, a senior, said that despite not knowing much about politics, she is influenced by her parents’ views, and is in support of Trump.

“From what I hear, they think Donald Trump would be the best candidate,” said Talya. “Especially because my dad is a small business owner and economically it makes more sense for them.”

On the other hand, students supported Clinton both because of her values and to stop her Republican opponent.

“It’s less of voting for Hillary because she’s a great candidate, which they think she’s not, and more that they’re voting against Trump,” said freshman Jacob Lefkowitz Brooks on why his parents are voting for Clinton.

For Layla Galeck, a vote for Clinton isn’t simply a vote against Trump, but a vote for the candidate she believes to be “one of the most qualified people to ever run” for the presidency.

The larger American Jewish population shows much greater support for Clinton than Trump at a ratio of almost 3:1, in agreement with just 30 percent of Shalhevet’s student body and their parents, according to a survey by the American Jewish Committee (AJC) Sept. 13.

Sixty-one percent of the Jews polled said they were voting for Clinton, while 19 percent supported Trump, the AJC pollfound.

Greater support for the Democratic party among Jews is a recurring theme in American politics. In a 2012 AJC poll done by AJC, President Obama had 64 percent of the votes, while Republican candidate Mitt Romney had 24 percent.

Another difference between Shalhevet and national polls was in the percentage who would sit out the election if they were 18.  The option of not voting was not included in the 2012 poll, as it has been in recent ones, with 8 percent of American Jews saying that they aren’t voting.

In the new Shalhevet poll, 20 percent of the students said they wouldn’t vote if they were of age, and 14 and 10 percent said their mothers and fathers were not voting.