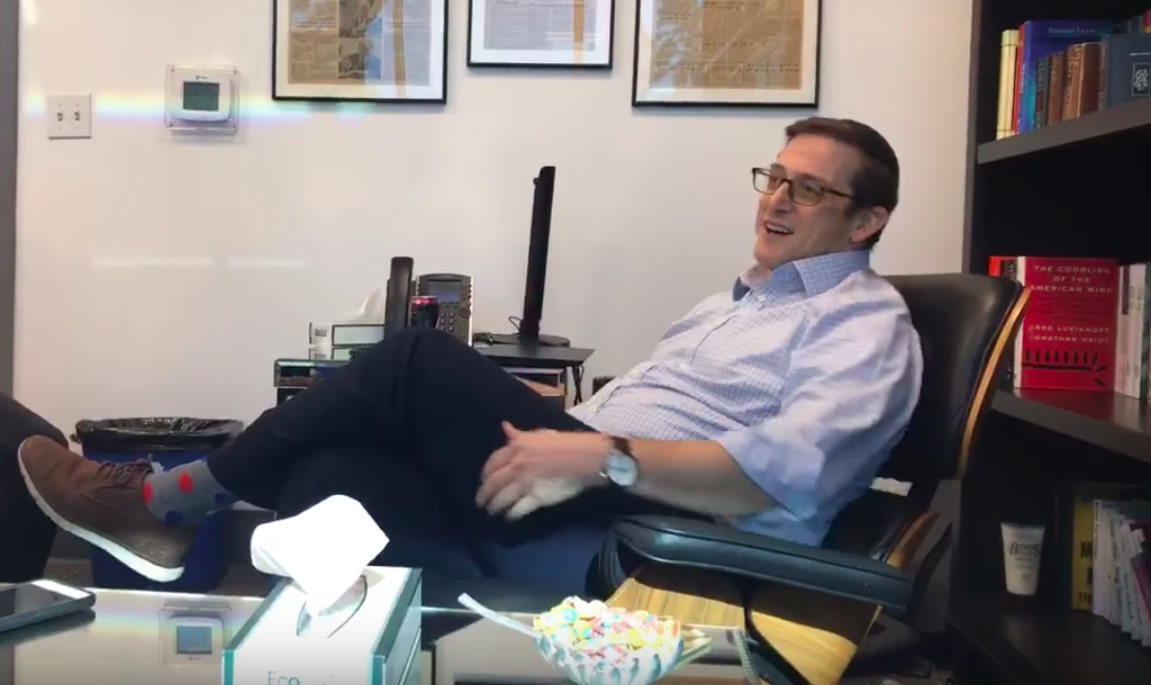 LEAVING: Rabbi Segal and his family plan to make aliyah to Israel next summer, something they’ve said for years that they wanted to do. The head of school gave a news conference to BP editors last April in his office. (BP Photo by Gilad Spitzer and Nicholas Fields)

LEAVING: Rabbi Segal and his family plan to make aliyah to Israel next summer, something they’ve said for years that they wanted to do. The head of school gave a news conference to BP editors last April in his office.

Board names Rabbi Block to succeed him as of spring 2021

Rabbi Ari Segal, who transformed Shalhevet from an idealistic but financially struggling school housed in a former hospital to a stable and larger school on a new three-story campus, will be slowly transitioning out of his position as Head of School starting at the beginning of the 2020-21 school year, school officials announced this afternoon. 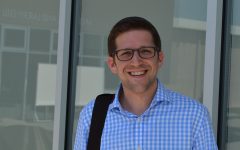 According to an email sent to current parents and staff at 12:59 p.m., Rabbi Segal will maintain his position in this academic year and next, but will make aliyah to Israel with most of his family next summer.

During the 2020-21 school year, Rabbi Segal will be at Shalhevet four to five days a week, traveling back to Israel for weekends, the email says.

The year after that, in 2021-22, Rabbi Segal will take on the new title of Chief Strategy Officer, under which he will guide Shalhevet to “new and greater opportunities and partnerships with institutions both here and in Israel.”

According to Dr. Noam Drazin, president of the Shalhevet board, Rabbi Segal will fill this role indefinitely in the years after he steps down.

“The best thing to say at this point is we’re not losing him that quickly,” Dr. Drazin said  in an interview with the Boiling Point today. “The best part of this plan, as sad as it may be that we are losing at some point Rabbi Segal to Israel, is that we have a two- to three-year transition plan in place.”

The school email, which contained separate letters from Rabbi Segal and from Dr. Drazin, also announced that Rabbi Segal’s successor would be Rabbi David Block, currently the school’s Assistant Principal for Judaic Studies. 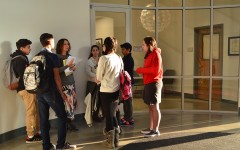 Applicants increase in number, but grade cap to stay at 60

“Rabbi Block has the respect and admiration of his colleagues and students at Shalhevet, in our community, and beyond,” said Rabbi Segal in his letter.

“This is in no small part due to his passion, dedication, talent and, perhaps most importantly, his deep humility. I am honored to partner with him.”

Rabbi Segal plans to step down as Head of School in the middle of the 2020-21 school year and Rabbi Block will replace him.

Interviewed by the Boiling Point this afternoon, Rabbi Segal sounded elated about the announcement. The title of the email he sent out was “Exciting News!”

He said the transition for the Segal family would include their second daughter starting at Shalhevet this year and continuing to attend after the family moves,  staying with her dad during the week and another family over weekends.

Rabbi Segal said he would hopefully continue to come to school during the week throughout her four years at Shalhevet, even though commuting to Israel is difficult.

“It was important for our family to get to Israel for our kids starting in the 2020-21 year,” said Rabbi Segal. He and his wife, Judaic Studies teacher Ms. Atara Segal, also have an older daughter,  Shalhevet alumna Noa Segal ‘18, who made aliyah last year, and two daughters still in elementary school.

Rabbi Segal also went back-and-forth to Israel in 2016-17, while his family lived there so Ms. Segal could study to become a Yoetzet Halacha at the Nishmat seminary in Modi’in.

“I didn’t want to immediately jump out of Shalhevet and leave Rabbi Block with only a year of us working together on his new school role,” he said. “Shalhevet has been literally the greatest work experience of my life. I feel incredibly connected and indebted to the school but also passionate about it, and I wanted to keep it functioning at as high a level as possible.”

Rabbi Segal was appointed head of school in October 2010 and arrived in Los Angeles the following fall, in 2011.  Since then, school enrollment has risen approximately from 180 to 264, with annual waiting lists of admitted students.  The number of applicants for each year’s class has risen from 38 in 2010 to  to 115 in 2016, the last year for which statistics were available this afternoon.

In 2013, with then-board president Larry Gill Rabbi Segal spearheaded the sale of two-thirds of the school’s property to the developer of the Vinz apartment complex, using the proceeds to make possible the new school building, which opened in 2015.

Meanwhile, he strengthened the school’s Judaic Studies curriculum, bringing in an entirely new Judaic Studies staff and backing the development of a new Talmud curriculum, called LaHav, now in use in Jewish schools around the world.

He also brought highly trained women into the Judaic Studies department, among them Rabba Ramie Smith, a graduate of Yeshivat Maharat; Ms. Ilana Wilner, a graduate of the Graduate Program in Advanced Talmudic Studies at Yeshiva University; Dr. Sara Smith, who earned a doctorate in Jewish Education at NYU; and Yoetzet Segal, who before becoming a yoetzet halacha became the  first woman to teach Talmud in an Orthodox school in Los Angeles and also has served as masgicha ruchanit (spiritual counselor) and head of Israel guidance. 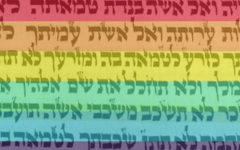 In 2016, Rabbi Segal instituted and publicized an official LGBT inclusion pledge — the first of its kind in an Orthodox day school — hoping it would set an example for other institutions.  In 2013, he decided not to allow girls to wear tefillin at school, but to let those who wanted to do so daven at a Temple Beth Am, a nearby Conservative congregation, and come to school after tefilah.

With the new building came a state-of-the-art gym used by the school’s basketball and volleyball teams and for P.E classes. The school also founded and sponsors the Steve Glouberman Basketball Tournament, which has brought in as many as 20 teams total, boys and girls, from around the U.S. and Israel.

Shalhevet’s varsity boys basketball team has for the past two years in a row won the Red Sarachek Tournament, a national Jewish high school basketball competition at Yeshiva University.

Although Rabbi Segal informed the board of his decision to leave a few months ago, he has often spoken and written of his family’s wish to live in Israel.

“As Religious Zionists,” he wrote in his email today, “aliyah has been a dream for us for many years, and with the support and guidance from Nefesh b’Nefesh and our family, we are confident in our ability to make this dream a reality.”

“I think one of the best things that Rabbi Segal has brought to our institution has been progressive thinking in Modern Orthodoxy that has completely changed how we look at Modern Orthodox education in this country,” said Dr. Drazin.

“To have him be with us and directly involved in curriculum development and faculty recruitment has been a huge benefit to us and our school.”

Dr. Drazin said the decision to elevate Rabbi Block was made with the help of a New York-based consultant, Dr. Scott Goldberg, an associate professor of education and psychology at Yeshiva University, who has been helping the school for several years on various issues.

According to Dr. Drazin, the executive board — the officers of the board of trustees — made the decision with the help of Dr. Goldberg and “certain faculty and administration.”

He said the group did “an informal search of who was available around the country” and were advised to choose someone from inside the school, partly for stability reasons and partly because of Rabbi Block himself.

“We have someone in Rabbi Block who eats and breathes Shalhevet, has a personality that very directly matches the administration and faculty of the school, is one who is extremely motivated and inclined to be mentored in the process, and has a good idea of how this community works and community politics as well,” Dr. Drazin said.

“We felt that we should take this opportunity to develop someone who is going to be amazing in the future wherever he may go.”

“Both Rabbi Segal and Atara Segal are integral parts to the Shalhevet community,” said incoming Agenda Chair David Edwards. “While no one can replace Rabbi Segal, Rabbi Block is an amazing leader, teacher and an inspirational person. He will definitely do well in his new role.” 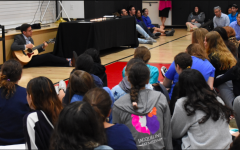 “I think Rabbi Block would be a great head of school,” said Caroline. “I’ve had him as a teacher and I’ve also grown very close with him because … he was sort of my advisor throughout the whole process. I have a great relationship with him and I know he’s going to do a great job, and I know he has a great relationship with a majority of the students.”

Rabbi Block, who has been in charge of prayer at school, teaches Judaic Studies classes including Jewish Philosophy and Talmud and serves as mashgiach ruchani.  He leads impromptu singing in the hallways with his guitar and was a founder of the Maccabeats Jewish a capella group. He arrived in fall 2016.

He became Assistant Principal after the departure of then-principal Dr. Weissman in 2018.   Dr. Drazin said the board would be looking for someone to replace him in that role.

Rabbi Block is only 31 years old, but Dr. Drazin said he is more than qualified for the role of Head of School.

“I think we should think of it not as chronological age but functional age,” said Dr. Drazin. “Despite his young age he has a very mature stature and is incredibly mature and humble. I think he’ll do phenomenally.”

He said Dr. Goldberg, the consultant, would be communicating with administration online through weekly video chats since he lives on the East Coast.

Rabbi Segal, who came to Shalhevet from Houston, where he was Head of School at the Robert M. Beren Academy, said he was looking forward to working with Rabbi Block on the transition.

“Rabbi Block and I have a great working relationship and I am incredibly thrilled that he will be the next head of school,” said Rabbi Segal. “I certainly feel excited to work with him and have the transition be in a more healthy pace.”