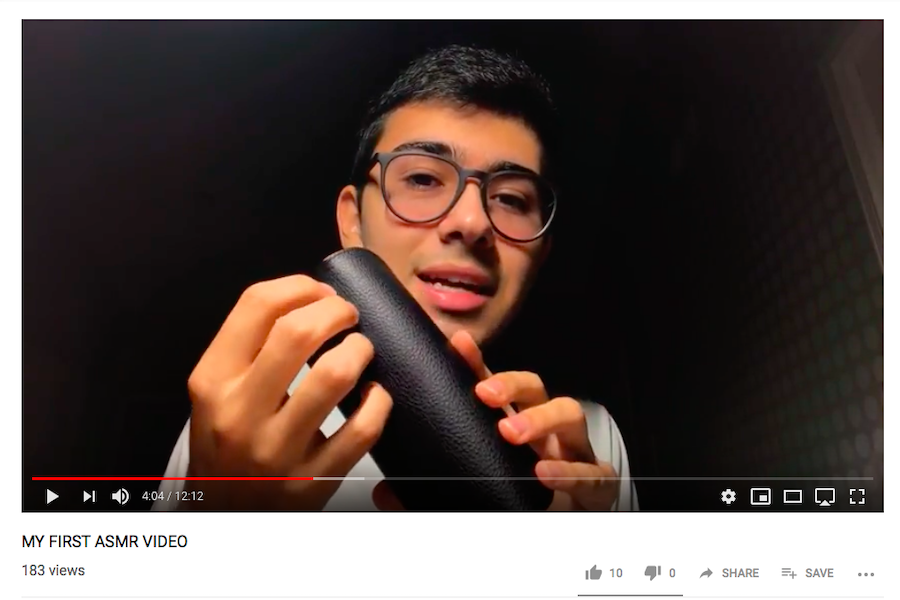 ASMR: Senior Josh Sarir starts his ASMR video by tapping with his finger on his glasses case while speaking in a low, whispery voice. The tapping produces soothing sounds which have been found to lower viewers’ heart rates. Screenshot from youtube.com (youtube.com)

ASMR: Senior Josh Sarir starts his ASMR video by tapping with his finger on his glasses case while speaking in a low, whispery voice. The tapping produces soothing sounds which have been found to lower viewers’ heart rates. Screenshot from youtube.com

From tapping or whispering to slicing soap or chewing sushi, sound-shows on Youtube are lowering heart rates and helping people fall asleep

Sending chills down people’s spines is a new way to unwind. Video clips of people whispering, eating, tapping on microphones and making other quiet, repetitive sounds are trending on the internet as something called ASMR.

The letters stand for Autonomous Sensory Meridian Response.  According to Wikipedia, ASMR is a “static-like or tingling sensation” that can be triggered by quiet sounds.

“Autonomous” means that the sensation happens on its own, without direct stimulation (say, someone scratching or massaging your head). The “meridians,” in acupuncture and Chinese medicine, are a set of 12 pathways in the body along which “vital energy” is said to flow.  So ASMR is a sort of free-standing sensory reaction to stimulus of a “meridian,” one of these pathways — that is, you are feeling some tingling at the top of your head, though no one is touching you there.

“It feels almost like…a sparkler,” said junior Danya Helperin. “It’s like if you get goosebumps, and your hair stands on end and you shiver for a second. It’s like that, but not unpleasant, it’s like a good feeling.”

According to Wikipedia, ASMR reactions can be triggered by various categories of sound.  There are “whispering triggers” — someone speaking in a whisper; “auditory triggers” — non-vocal noises such as tapping or writing;  “personal attention role-play triggers” — watching someone pretend to paint your nails or cut your hair on camera while whispering; or “clinical role-play triggers,” whispering into a camera while pretending to provide clinical or medical services.

SAS Psychology teacher Mr. Eli Shavalian said he didn’t know much about ASMR.  But he said the brain processes different kinds of sensations in different ways.

“I like helping people, so if that’s a way that someone can relax or de-stress from the day, then why not?

“When it comes to sensations and perception, it depends on the outward stimuli and how our brain perceives it,” said Mr. Shavalian, who is also Associate Director of College Counseling. “So a lot of stimuli, whether it’s sight or sound or smell, can go through a lot of different stages from the way it enters our body to the way our brain understands it.”

While not all listeners experience the “tingling” feeling, most who enjoy ASMR find the sounds calming.

“They’re relaxing,” said junior Maya Tochner. “I can be absent-minded while I watch them. It’s just kind of an escape.”

Several students said they use it to doze off.

“Without it, my mind is racing and I have a really hard time falling asleep,” said Danya. “But it gives me something to focus on, and it acts as a sedative — like, it literally puts me to sleep.”

There is beginning to be scientific evidence that explains why. A first-ever study on ASMR published by PLOS-One last June found  what it called “reliable changes in affect and physiology” during ASMR use,  including a slower heart rate, which is a sign of relaxation.

One of the most popular platforms for ASMR is Youtube, where entire channels are dedicated to providing this for eager viewer-listeners.  More than 11 million videos in this category have been published, with some individual videos reaching 40 million views.

Senior Joshua Sarir has his own ASMR Youtube channel under the username “Joshua Yosef.” It features videos of him whispering, blowing, tapping on objects and pressing buttons.

“It’s really relaxing,” says Josh. “A lot of people use it to fall asleep or to deal with anxiety or stress.”

Josh started the channel for his own enjoyment, but also because of the positive effect it can have on others. It has six ASMR videos, with 385 views total as of Feb. 7.

His first video, which was published Nov. 1,  is a compilation of Josh whispering, tapping, blowing and scratching various objects — a postcard, a glasses case, a phone case, a paper towel roll and a glass tube — all amplified by a microphone.

“There is a big ASMR community on Youtube, and I like helping people,” said Josh. “So if that’s a way that someone can relax or de-stress from the day, then why not?”

Josh does not currently profit from the videos and does not actively publicize them. He mainly makes them as a hobby, or to entertain friends.

But some ASMR producers earn a living from the pursuit.  One popular ASMR Youtuber is Taylor Darling, known as “ASMR Darling,” who has over two million subscribers.

“ASMR, in my definition, is a calming, euphoric, tingling feeling you get,” said Ms. Darling in an explanatory video. “ASMR videos are to help you experience ASMR, and trigger your ASMR.”

But some — including some ASMR fans — are repulsed by certain styles of the genre.  Examples include clips of people playing with slime with amplified sounds, as well as clips of people cutting soap with a knife.

“I don’t like it when they eat sushi in enormous pieces,” said Maya.

Others are bothered by all types of ASMR.

“I find the whispering ASMR videos really unsettling,’ said senior Honor Fuchs, who has looked at ASMR videos and doesn’t like them  at all. “I always scroll past them as fast as possible. They’re really unsettling and I hate watching that. I also do not see the appeal in slime or soap-cutting videos. They do not make me feel good.”

While videos making noises to produce a calming tingling sensation have existed on the internet since the mid-2000s, the term “ASMR” was not used for them until 2010.

Internet searches for ASMR first began to appear in 2011, and the number of searches has been consistently increasing since then. It is only now beginning to be studied by scientists, but

seems to meet a need that might otherwise be met through medicine.

According to the article in PLOS One, which is the peer-reviewed journal of the Public Library of Science,  the increased popularity of ASMR indicates that people may be using the videos to deal with insomnia or depression. Millions of people suffer from those conditions, so the possibility that ASMR is could help them is something the article’s authors think science should pursue.

“It’s like an explosion of sensation that travels through your whole body.

The article notes that ASMR responses are not experienced by everyone who views or hears the videos, but seems to provide some benefits for those who do experience the sensation.

“It is essential to establish whether ASMR produces the reliable emotional and physiological changes that would substantiate these anecdotal claims,” states the article, by Giulia Lara Poerio, Emma Blakey, Thomas J. Hostler and Theresa Veltri.

“Such findings could potentially have downstream implications for whether ASMR could provide a genuine method to combat rising rates of conditions such as insomnia and depression in those capable of experiencing ASMR.” 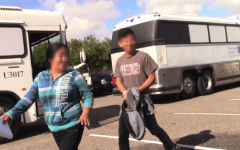 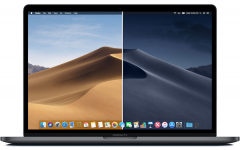 MacOS Mojave: A desert's beauty, and features to match

Dr. Lance Steinberg, a child and adult psychiatrist in Encino, said he wasn’t surprised teens were looking for a way to combat stress. According to the American Psychological Association, stress has been rising.

“Currently, young people face incredibly intense competition for grades, jobs, schools, while keeping up with rapidly changing technology as incredible amounts of information amass,” said  Dr. Steinberg. “On top of this pressure to remain highly competitive, one is then flooded by social media fictitiously implying everybody is always happy and having lots of fun.”

Dr. Steinberg was not familiar with ASMR, but agreed that non-medical treatments for stress were useful — in some situations.

“There are multiple ways to achieve a calmed state,” said Dr. Steinberg “Generally, if a non-chemical intervention is safe and deemed with minimal risk, most physicians would suggest that approach.

“However, depending upon the intensity of the anxiety and how it affects one’s life,” he added, “there are times that proven Western medications are truly life-saving.”

Most Shalhevet students who use ASMR said they use it to calm down.  But stress relief isn’t the only benefit ASMR users are seeking.

“It’s like an explosion of sensation that travels through your whole body,” said sophomore Rena Harkham in an interview with the Boiling Point. “It calms you and relieves all of your anxiety.” 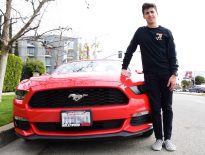 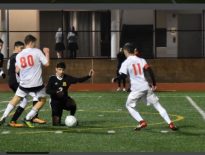 soccer No winner, no loser as Firehawks and Panthers batt…