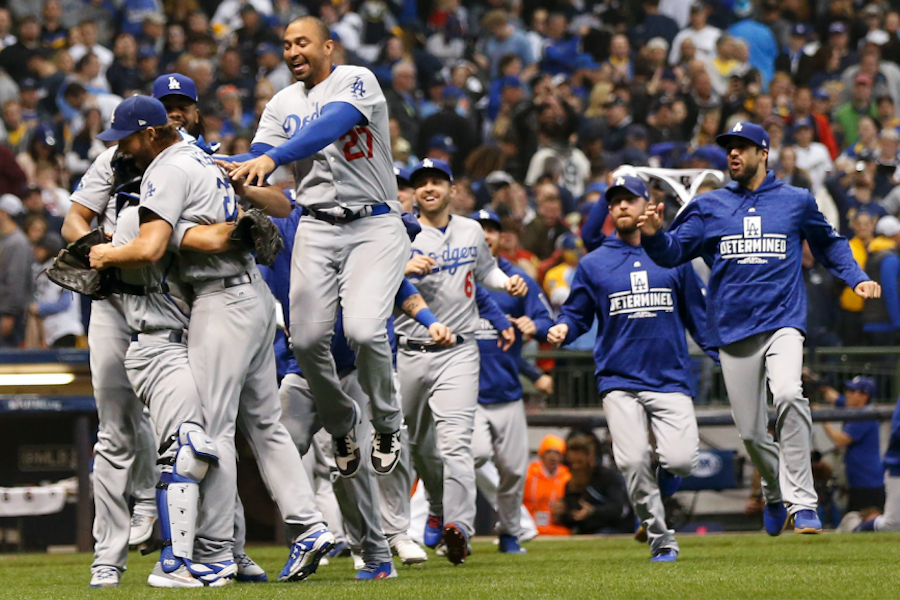 CELEBRATE: Dodgers celebrated on the field in Milwaukee after their division-winning defeat of the Brewers Oct. 20. (-mlb.com-/" class="creditline"> MLB.com )

CELEBRATE: Dodgers celebrated on the field in Milwaukee after their division-winning defeat of the Brewers Oct. 20.

Excitement, optimism at Shalhevet as Dodgers advance to World Series

‘Dodger Pride Day’ and a Game 2 viewing party on the turf bolster playoff atmosphere at school.

Special festivities are planned at Shalhevet to celebrate the Dodgers making the World Series and to cheer them on, but most will be on the series’ second day because Ikar uses the building after school on Tuesdays.

According to Dean of Student Life Dr. Jonathan Ravanshenas, Wednesday will be LA Dodgers pride day at school, with students being encouraged to wear Dodger gear in support of the boys in Blue.

After school, a viewing party is being planned to watch as the Dodgers take on the Boston Red Sox in the series’ Game 2, at 5 p.m. on the third-floor turf.

“It will be fun to get the school together and watch the game and build some ruach,” or spirit, said Dr. Ravanshenas, who is organizing the event, in an interview.

It’s the second year in a row that the Dodgers have moved on to the World Series, this time thanks to a 5-1 victory over the Milwaukee Brewers in Game 7 of the NLCS on Oct. 20. The fanbase is energized, hoping the team can deliver the city its first World Series title since 1988.

At Shalhevet, the team’s fans are elated that they have another chance to win the World Series, this time against the iconic Boston Red Sox.

Senior Ethan Blacher believes the Dodgers will win it all.

Relive the final out of the @Dodgers‘ #Game7 victory via #ClinchCam! pic.twitter.com/MwbHpaDXI8

“The city has waited a long time for another ring,” Ethan said. “We were close last year, one game shy, but this year I think is our year.”

Dodger fans can watch the Boys in Blue get ever so closer to becoming World Series champions right here at Shalhevet. A World Series viewing party for Game 2 of the World Series will be held at 5 P.M. PDT on the turf, according to a Schoology post from Dean of Student Life Dr. Jonathan Ravanshenas.

In addition to the Game 2 viewing party,  Dodger fans, and even those who aren’t everyday Dodger fans, plan to watch the action and be a part of the baseball history.

Freshman David Stein, who plans on going to Game 5 at Dodger Stadium on Sunday, will watch the other games at home.

“I’m going to have to get my homework done before so I can watch it,” David said.

He said he’ll be sure to watch all the action, even late into extra innings.

Senior Jamie Berman says she isn’t a regular baseball fan, but said she may watch some World Series action with her family. If she doesn’t, she’ll be sure to know when the Dodgers score.

“I might just hear them clapping really loudly from the other room,” Jamie said.

All of the Dodger fans interviewed by the Boiling Point believe the Dodgers will win the World Series — but many think it will boil down to Game 7, as it did last year versus the Houston Astros.

They noted that if the Dodgers want to beat the Boston Red Sox — who finished the regular season with the best-in-the-majors record of 108-54 — they’ll have to play better baseball than they did during the NLCS.

Sophomore Ze’ev Remer said the Dodgers need to to play “small ball” in order to compete with the Red Sox.

“They need to play smarter baseball,” Ze’ev said. “When a runner is on second, bunt him over to third.”

The Dodgers were criticized for being unable to put the ball in play. In fact, the team had more strikeouts (82), than total bases (78) in the NLCS.

However, students weren’t concerned about the Dodgers’ collective .223 batting average during the postseason so far. Junior Zach Helfand noted that the Dodgers managed to recover from a 16-26 record in the middle of May and became the winners of the National League West.

“I’m not so fixated on the stats as I am on resiliency and the fact that they came back and won all this,” Zach said.

“I’m not so fixated on the stats as I am on resiliency and the fact that they came back and won all this.

“The World Series is a completely different series than the NLCS,” Andrew said. “…Anything can happen.”

While fans are enthusiastic about the Dodgers’ playoff run, it’s been a bumpy road to the World Series — and it could become even more turbulent.

After defeating the Atlanta Braves in the league’s division series, 3-1, in the five games, the Dodgers played the Brewers in the seven-game NLCS. The Dodgers and Brewers split the first two Brewers’ home games at one apiece. After winning two of the next three at Dodger Stadium, the Dodgers returned to Milwaukee up 3-2 in the series, needing to win either Game 6 or Game 7 in order to advance to the World Series.

The Dodgers lost 2-7 in Game 6, and it seemed like the Brewers’ had the momentum they needed to win going into Game 7. Nevertheless, the Dodgers pulled through with a stunning 5-1 victory in Game 7, on the Brewers’ home field.

Dodgers’ outfielder Cody Bellinger was named the NLCS MVP. Though it was Brewers’ outfielder Christian Yelich who had opened the scoring with a solo blast to right in the first inning, Bellinger crushed a go-ahead, two run homer to the upper deck in right field in the second inning, putting the Dodgers ahead 2-1.

From then on, the Brewers were unable to retake the lead. 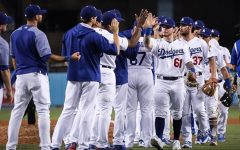 COLUMN: Dodgers we love it! 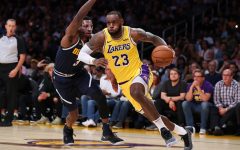 Still trailing in the top of the 6th inning, Brewers Manager Craig Counsell handed the ball to reliever Jeremy Jeffress in relief.  It was a decision he probably regrets; Yasiel Puig drove a 1-1 pitch over the fence in center field, scoring Max Muncy and Justin Turner. After the three run homer, the Dodgers led 5-1, the game’s ultimate final score.

After that, it was too little, too late, for the Brewers as the Dodgers carried the momentum for the rest of the game. The Dodgers’ bullpen — as it had been for the entire series– was stellar. Relievers Ryan Madson, Kenley Jansen, and starting pitcher ace Clayton Kershaw took care of the sixth, seventh, eighth, and ninth innings respectively, allowing no runs and only one hit.

The Boys in Blue can credit their pitching– especially their bullpen — with their postseason success so far. The Dodgers’ bullpen has allowed just six runs the entire postseason so far — over more than 44 innings.

Even though he thinks the Dodgers’ pitching is good enough to supplement their offense, Ze’ev Remer hopes the offense will do its part.

“Hopefully some big players like Manny Machado and Cody Bellinger will step up,” Ze’ev said.

Dodger fans won’t have to wait long to see the Boys in Blue take on the Red Sox. Game 1 of the World Series is scheduled for tonight at 5:09 PM PDT, and will be played at Fenway Park in Boston. Clayton Kershaw will start for the Dodgers and Chris Sale will take the mound for the Red Sox.

If neither team has won four games by then, both teams will return to Boston to play Game 6 and/or Game 7 at Fenway Park on Oct. 30 and Oct. 31.