By Molly Litvak and Lucy Fried 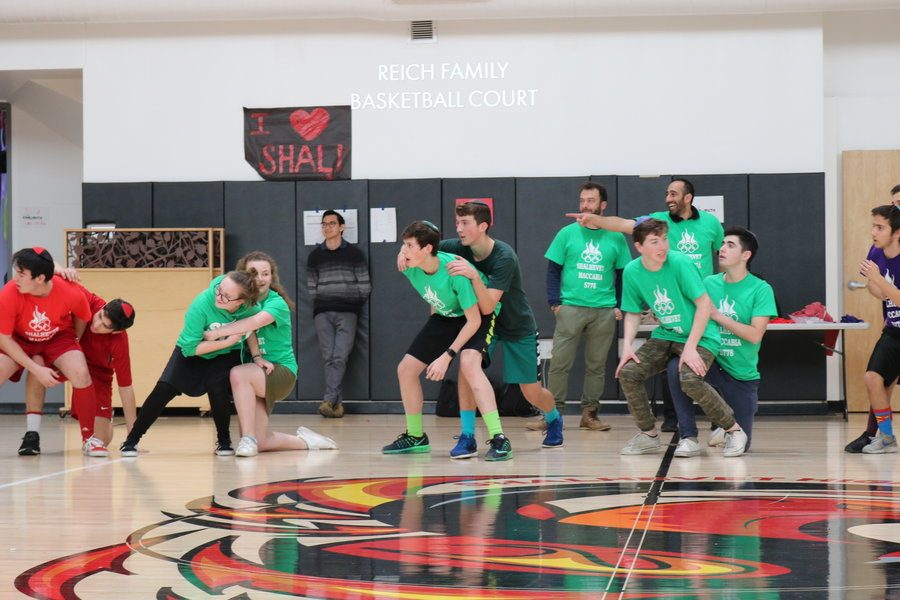 SAFE: Members of the Red and Green teams ran to their partners’ laps as they tried to stay in the game.

The stakes were high as a sea of students, each grade wearing a different color, flooded into the gym for the last event of the first day of Color War.

The whole school was there, some 250 students and about 50 staff. Seniors wore purple, juniors wore red, sophomores wore green and freshman wore black.

“At that point in the day, the Black team was already losing, so I just wanted everyone to have fun and have a good time,” said freshman captain Shani Menna.​ “After​ all, that’s what Color War is about anyway.”

But the popular bar-bat mitzvah game called “Coke/Pepsi” became one of the most hotly contested of Color War and introduced an abundance of tension and dispute into the two-day contest, as the juniors and seniors battled at the end.

Some thought the seniors’ eventual victory was arbitrary, while the seniors argued that they should have won sooner and that judges had prolonged the game to give the juniors more chances. And everyone agreed the judging had gone on too long.

“The judges kept redoing it after someone got out, they just kept putting them back in and restarting,” said freshman Akiva Rubin.

“Coke/Pepsi” is a giant back-and-forth race in which pairs standing on either side of a room respond to calls of particular words. After hearing a dvar Torah about Purim from senior Ilan Bouskila, each color sent in about 13 pairs from its team to play.aaas

If the judge called “Coke,” one member from each pair would run to the other side, and if he or she called “Pepsi,” the other member would run.

The phrase “Seven-up” would force everyone to freeze in place, and if  “Dr. Pepper” was called, then each pair would link arms in the center.

These were the basic rules of the game. But Shalhevet’s Student Activities Committee, which ran Color War, had added a twist. If the judge called out “Rabbi Block” — a Shalhevet Judaic Studies teacher — each pair had to cry, “Oy yoy.”  And if the judge called “Shakespeare,” they had to jump up and down and say, “To be or not to be.”

If a pair did not do the move correctly or was not fast enough, they would be eliminated. Additionally, anyone who moved when they weren’t supposed to would be out. The last pair still in would win and get 500 points for their team.

For the first couple of rounds, nothing happened. Soon after, judges began eliminating pairs. The Black team was the first to be fully removed from the game, followed by the Green.

“I got out in Coke and Pepsi because they said Coke while we were already on Coke, and I moved so I got out,” said freshman Joey Blumofe. “It was still fun.”

Joey was not the only person to get out this way, as it was the main method used to disqualify people. This technique was used repeatedly until most of the contenders were gone.

Finally, there was only one pair each representing the Red and Green teams, and two representing Purple. However, it was getting harder to cut players.

In an attempt to get people out more quickly, SAC adviser Ms. Ilana Wilner announced, “Last one to the other side is out — doesn’t matter if you did the right thing, you’re out.”

The atmosphere of the gym became tense and excited as the last few pairs tried their best to win. Multiple times, the judges were forced to quiet down members of the teams who were watching because they were making too much noise. It was not unusual for a player or team member to argue a judge when they were eliminated.

Eventually the last Green pair lost and soon after that there was only one pair from each from Team Purple and Team Red.

Junior Hannah Friedman, who was a part of the second-to-last Red pair to be eliminated, felt her team should have won.

“It seemed like they kept doing re-dos until the Purple team won,” said Hannah.

The final junior pair was Asher Dauer and Sam Navon, and last seniors pair were twin brothers Sam and Zack Hirschhorn. The judges repeatedly called one pair out and then changed their minds.

Team members started complaining. Accusations of bias sprung from both the seniors and the juniors as the judging continued and the competitiveness increased.

Finally, the juniors were called out when they failed to jump up and down on the word “Shakespeare.”  They disagreed with this call.

“The rules were for when they call ‘Shakespeare’ you bounce up and down, we did that and the other team didn’t yet, they allowed the game to keep going.

“The refereeing was just absurd, and they gave them these 500 points they didn’t deserve… Asher and I won that, we were faster and better.’

Debates continued on Schoology hours after school had ended. There, seniors defended the Purple team’s win.

“Oscar was the judge and called multiple times that we won and they kept giving you chances, what more do you want?” commented senior Elie Helfand, referring to security guard Oscar Hernandez.

Zack Hirschhorn also argued that the juniors were let off the hook many times.
“You lost four rounds ago. Dauer admits it,” Zack commented in all caps. 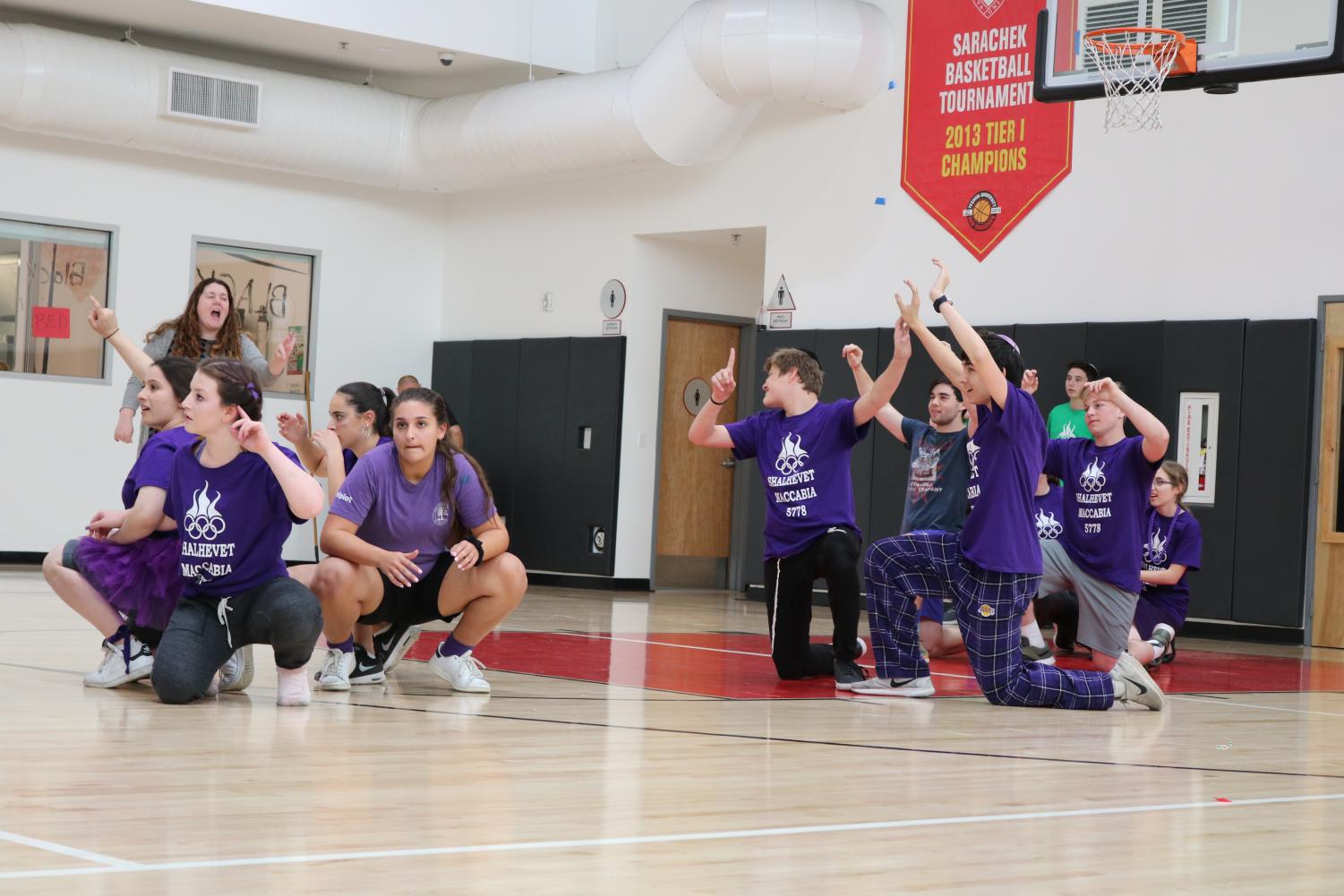 Zoey Botnick
Akiva Rubin thought judges kept Purple pairs in the game on purpose even if they weren’t actually better than pairs of other colors.

“By the end there was so many more Purple team members [in the game] than other team members,” said Akiva.

At a school-wide davening the next morning, Rabbi Ari Schwarzberg jokingly settled the dispute, announcing that the winning points from the game would be given to the sophomore Green team. This provoked groans from both Purple and Red teams until SAC chairs Ariel Cohen and Summer Gershon announced this would not be the case.

Ariel did not participate in the competition but still had something to say about it.

“That was one of the most intense games of Coke and Pepsi I’ve ever seen,” Ariel said.“I’m glad it finally came to an end but it was fun.”

Purim was only days away. In his dvar Torah, Ilan spoke about the importance of matanot l’evyonim, the commandment on Purim to give gifts or money to the poor. He specifically emphasized the importance of it in the eyes of the Rambam — Maimonides, a well-known and influential Torah scholar of the Middle Ages — who said it came before all other mitzvot on Purim.