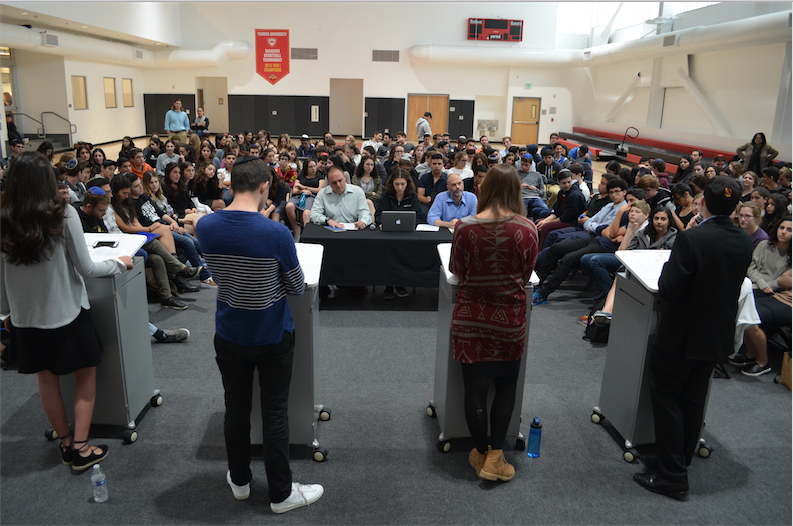 TABLE: From left, General Studies Principal Mr. Daniel Weslow, Hannah Jannol of the Boiling Point, and Dean of Students Mr. Jason Feld posed questions to candidates for Agenda Chair in the gym May 12.

Sparks flew in the Agenda Chair candidates debate Tuesday, with charges, counter-charges, and at least one candidate saying she didn’t have the chance to respond to a direct and partially untrue charge.

Above, Standing behind lecterns at the front of the gym, all four candidates in tomorrow’s election answered questions posed by administrators and a Boiling Point representative, as students listened for 40 minutes during what is normally Advisory period.  BP Photo by Ezra Fax

Juniors Maya Golan, Bennett Schneier and Micha Thau and sophomore Rosie Wolkind answered questions about their experience, commitment to Agenda, policy views and leadership ability, as well as their views on how this year’s election policies were decided.  Micha said he’d been empowered by Town Hall and said he wanted to pass that experience on to others , while Maya touted her strength as a leader.

Rosie, the first-ever sophomore to run for the post, referenced her experience on the Agenda Committee. Bennett said a “fundamental change” in the way Town Hall runs is needed, and said he would bring a more relaxed and humorous tone to the weekly all-school meetings.

By far the most contentious topic was the election itself.  This year’s arrangements — including candidates having to be interviewed by administration to run, the Agenda Chair debate format, “soapbox” speeches on the roof for other candidates instead of an assembly for speeches, and a non-senior being allowed to run for Agenda Chair for the first time— were made by an unelected election committee, a subcommittee of Agenda tasked with setting election protocol.

The Agenda Committee approved the subcommittee’s plan without bringing it to Town Hall for discussion. Candidates were asked whether they favored the new policies or would let the Just Community have a chance to vote on them next year.

All four candidates responded by saying that if elected, they would bring the matter for discussion by the community next year.  But the comments became personal.

Rosie began by saying that despite her untraditional sophomore candidacy, she believed in a “transparent democracy.”

Bennett responded that Rosie could not be in support of transparency, because the decision allowing her to run had been made “unilaterally,” by administration, without student involvement, and violated school democracy.

Rosie admitted that she had asked Mr. Jason Feld, Dean of Students and Agenda adviser, if her running was okay, and he said yes. But she pledged that if elected, election guidelines would be “more in the hands of the people.”

Maya countered that her issue was not Rosie’s candidacy, but that the decision had been made without student input, and that there had been no transparency in the election committee.

Rosie agreed the rules should have been discussed publicly.

Then, in a comment that elicited a chorus of “oohs” from the audience, Rosie added that she had suggested to Maya that she file a Fairness complaint against her if she thought her candidacy was unfair.

“Maya,” said Rosie, “I also asked you to take me to Fairness and you said you don’t have time for that.”

Maya asked the moderators, “Can I respond?”

Debate rules stated that if a candidate was directly referenced, they would be allowed a 60-second rebuttal. But the discussion of the election committee had already had several back-and-forths.

“Please hold your response,” said Mr. Feld.  “We talked over the issue with the moderators, we’re going to move on to the next question, and you can certainly respond in your closing statement.”

Mr. Feld told the Boiling Point today that the moderators had to move on in the interest of allowing other candidates to speak.

BP VIDEO CLIP from Shalhevet Boiling Point on Vimeo.
Maya Golan was not permitted to respond to a charge by Rosie Wolkind.

“We were short on time, we wanted to give every candidate an opportunity to speak and that is not only the prerogative but also the responsibility of the moderators, and so we moved on to the next question,” Mr. Feld said today.

Maya did not bring up the subject in her closing remarks, but said later than if she had been allowed to respond, she would have told the audience she did in fact take the time to submit a written case to Fairness on Friday, May 6, via e-mail to Fairness Committee Co-Chair Jacob Dauer.

She retracted the case, she said, after her candidacy interview with Mr. Feld on the same day, in which Maya said he discouraged her.  Candidates this year were required to interview with administrators in order to run.

“He said if you proceed to bring this to Fairness this will be the most recorded Fairness case in the history of Fairness,” Maya said. “He said I will ensure that everything that is said is documented and I will ensure that you have to dedicate time and effort— there will be meetings, there will be people who will have to testify for you, I will have to bring in people, like [senior] Will Bernstein” of the Election committee.

She said he also told her that a case would delay elections until the fall, and this year’s seniors would not be able to participate.

“He was kind of just convincing me not to bring the case,” Maya said. “He was just ensuring that this case wasn’t going to be, that it would be a burden for me, and the wrong choice to do it. ”

Mr. Feld mostly agreed, emphasizing his concern for the delay.

“If that’s how she recalls it, fine,” Mr. Feld told the Boiling Point. “I told her that it’s her right to take a case to Fairness, Fairness will decide whether it wants to hear a case, but that she has to understand that the election process will need to be suspended until the entire process works its way through.”

After the discussion in her candidacy interview, Maya said she felt deterred because she did not want to deprive this year’s seniors of a vote. She quickly told Jacob Dauer that she wanted to revoke her case.

Rosie said she made the charge because she was unaware that there was a Fairness proposal, and candidates were attacking her publicly and personally about her age, not her policies.

“After [Maya] continued this more and more, I felt that we were wasting the students’ time and they should be hearing about what we want to do for the Agenda Committee,” Rosie said.

She added she still stands by her statement. Maya confirmed she did in fact initially say she “did not have time” for the Fairness case, but according to Maya, the discussion was much more casual than Rosie made it out to be.

During an election “soapbox” event on the third floor grass, the day following the debate, Maya told the rooftop audience that she did try to take the issue of Rosie’s candidacy to Fairness. Rosie instantaneously apologized to Maya, and the misunderstanding was cleared up.

“I think that this could have all been avoided if the guidelines were voted on in the first place, which I pushed for in our meetings,” Rosie told the Boiling Point. “I also tried my hardest to convince the other candidates to go forward with a hearing on a junior running.”

Meanwhile, senior Noah Rothman also says he sent a case to Fairness about a non-senior running for Agenda Chair.  He said committee chairs told him they turned down his case in order to prevent a delay.

Citing the confidentiality of Fairness Committee activities, Jacob Dauer would neither confirm nor deny that the committee had met on the issue.

Seniors are leaving on their Poland-Israel trip next Tuesday, but in some years seniors have voted while on the trip, either by computer or by paper ballot managed by the senior class presidents.

“After Friday, I’m more than happy to discuss all of those extra issues and what we can do moving forward,” said Mr. Feld in an interview. “But I don’t want us to take our eye off the ball, which is these candidates are running and they’re investing their time and their effort, and this is going to be a free, organized, fair election, and we’re letting the voter decide, not little subcommittees or legal wrangling here or there. I think it would be most appropriate if we left that until after the voting, and I will let our record and the work that we’ve done stand.”

He also said decisions about election policies this year have been based on the “governing principle” that voters should make all decisions at the ballot box.

“The principle of the process is that people who want to run should have the right to lay their case out and we need to trust the students and the voters to make their decision,” Mr. Feld said. “That was the governing principle.”

The rest of the debate was less combative, but just as chock-full of opinions. Bennett and Micha differed on the topics of Agenda Chair accountability and administrative interference with Town Hall.

Bennett said he did not support the idea of a January re-election of the Agenda Chair to hold him or her accountable for carrying out decisions made by Town Hall, saying it would not be fair to hold that against the chair since the Just Community is a collective not one individual.

But Micha supported full accountability, and said if people want a re-election midway through the year, he would give it to them.

Three out of four candidates favored limiting the number of outside speakers the administration could bring in to cancel Town Halls.  In the most anomalous opinion of the debate, Bennett said he is not against faculty overriding Town Hall for speakers.

“It’s not our place to tell the administration what to do,” Bennet said. ” The fact remains Rabbi Segal and Reb Weissman are in charge, and authority should not be confused.”

Micha and Rosie both proposed holding student polls to decide whether speakers could override Town Halls.

In closing and opening statements which commenced and concluded the morning long assembly, candidates described what their goals would be as Agenda Chair.

Micha expressed his “unwavering passion” for the Just Community and promised his reputation for being highly opinionated will not get in the way of his leadership.

“It will not be my Agenda, it will be yours,” Micha promised.

Maya Golan described her strength as a leader and said she would represent all students, identifying with many in the audience by referring to weaknesses in math and in Dr. Michael Yoss’s history classes.

Rosie focused on the issue of her sophomore candidacy. She said she hoped people would not make their vote based on how old a candidate is, but on the relevant experience and dedication they possess, noting that she’d served as Secretary of the Agenda Committee this past year and was the only candidate running for chair who had served on Agenda at all.

Most of Bennett’s speeches garnered laughter from the audience.  Pointing out two freshman who were taking turns napping during the debate, Bennett proposed a “fundamental change” to Town Hall. He said his ability to bring a light and humorous tone to Town halls would change the way the weekly assembly operates. 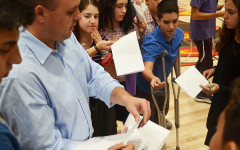