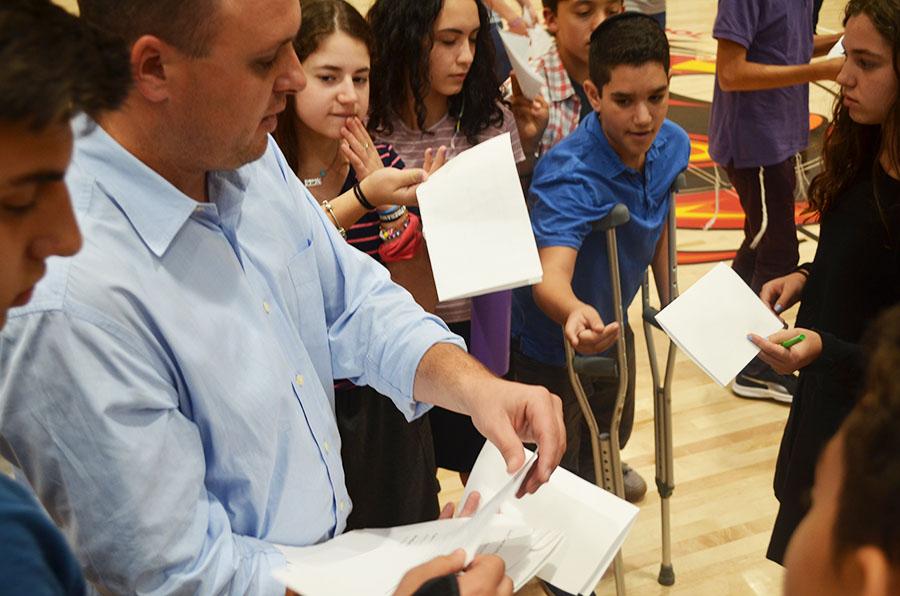 VOTING: Above, General Studies Principal Mr. Daniel Weslow collected ballots from freshmen in grade-level representative elections for Fairness, Agenda and SAC. A committee of six students set the structure of this year’s elections.

Just before finals last year, when students could count the remaining days at the JCC with their fingers, six students squeezed into the tiny upstairs administration office during breakfast for a meeting they had been personally invited to attend.

This meeting marked the formation of an ad-hoc committee, working under Agenda to organize and oversee the elections process, following the wildly controversial election that had during the weeks before.

The committee was appointed mostly by Dean of Students Mr. Jason Feld, it made decisions, set rules and policies, and last month counted the votes after grade-level elections for committee representatives.

The October elections ran much more smoothly than last spring’s.

But Agenda never made any formal announcement to the student body of this committee’s existence.

“After last year’s elections, the feeling was that there was not a set procedure or protocol for elections, which we know are essential for the Just Community and happen every year so it shouldn’t take us by surprise,” said Mr. Feld.

“One of the things I worked on was getting consensus around the idea of creating that protocol and procedure and doing so in a way that is beyond any reproach or self-interest.”

To form the committee, Mr. Feld made a list of students who he thought had “high character” and had also not run in the spring election, then asked incoming committee chairs Micah Gill (Agenda), Jonah Gill (Fairness), Laly Chriki (SAC) and defeated Agenda Chair

candidate Will Bernstein to choose two per grade from the list.

Topics the committee tackled included things like election-related dates, campaign guidelines, official requirements to be on the ballot, voting eligibility, tallying ballots, how to announce winners, and what election results to release publicly and not to release, along with ensuring candidates have enough time to debate.

Mr. Feld initiated an e-mail chain over the summer and half the members met in October to discuss policies for the representative elections.

“I felt honored to be chosen for the committee,” said Mark Miller, who has never run for Just Community office. “I was excited because it allowed me to make a lasting impact on my school.”

Given the work they were doing, Agenda asked them to collect, count and recount the votes for the rep elections. They also recommended that Agenda revert back to only publishing the names of  winning candidates, and not the number of votes each candidate received.

The committee did not, however, set the new policy of not allowing applause after candidate speeches. Agenda Secretary Rosie Wolkind said Mr. Feld initiated that policy himself.

But Micah, who was away for the senior retreat during that decision, said it was a good way to make the elections more fair and objective.

“We adopted this policy to prevent any external reasons from affecting voting decisions,” Micah said.

“We’ve only had three months to work together as a committee,” said Will Kasdan. “So far, we’ve counted the ballots for the rep elections. In the future, we will work to maintain and upkeep the elections.”

What the group was trying to avoid was what happened in May, when ambitious efforts to change things ended up causing a lot of discord.

First, a group decided to form a political party, called Maaseh, by looking for candidates to run as an all-or-nothing slate. But it was too close to election day and Fairness decided that candidates had to run on their own, though they could share positions and a platform.

“I asked Goldie and the Agenda Committee — those that weren’t running for positions — to find the last few voters and remind them to vote,” Mr. Danovitch said in an interview. “I also told Goldie to call those voters if necessary. We wanted full participation from the student body.”

This decision was hotly disputed because she is the sister of Alec Fields, who won the race for Agenda vice chair by just two votes and who voters over the phone may have felt more inclined to vote for since they told their picks to Goldie.

Finally, the Boiling Point also sparked controversy when Agenda disclosed to editors the vote totals for some winning and losing candidates for the first time, and Boiling Point immediately published those numbers. After receiving pushback from administration and some students, faculty advisor Mrs. Joelle Keene decided to delete that information from the story.

Though all this was unprecedented, Mr. Feld said that election guidelines have always been unclear and inconsistent. Although the Agenda Committee could have set new concrete guidelines itself, Mr. Feld felt it would be more efficient to have a sub-committee do the leg-work for Agenda and focus strictly on elections.

“In theory you don’t need this committee,” Mr. Feld said. “[But] in reality, as long as I’ve been here, no one is quite sure how elections work.

“The date of the elections seems to be pretty arbitrary,” he said. “Sometimes seniors are here, sometimes they are not here. Last year they didn’t even have the ability to hold a public debate for the candidates due to time constraints. All of that should be worked out if we are going to have a healthy, functioning Just Community.”

Mr. Feld also said the committee would be a good way of involving more people in student government.

Micah Gill, who dealt with the elections issue as one of his first tasks as Agenda Chair, said that the committee would help.

“They are there to keep all elections as impartial, objective, and transparent as possible and to have a body that can take accountability for what happens,” Micah said. “The idea is that it is an entire entity that is totally objective. It is not an incumbent or a new person. There really aren’t any biases. It’s a different committee that can observe with a third-party eye.”

The existence and role of the election committee were not mentioned during Just Community Reorientation meetings in September, and as of Nov. 10, it had not been mentioned at Town Hall either, or in the election assemblies each grade held before voting on committee representatives.

But Mr. Feld said he wanted people to know about the committee and does not know why Agenda has not mentioned it yet.

“I don’t see any reason why it should be secretive,” said Mr. Feld. “I don’t think it’s intentionally secretive. I hope that people on the committee get the credit that they are due.”

Micah explained why the idea was not brought up in Town Hall.

“At the time the idea was to get it done as effectively and quickly as possible,” Micah said. “Bringing the vote to the entire student body would delay the entire process. But it may go to the entire body within the next school year.”

While it may have been more transparent to disclose information about the committee, Agenda is not obligated to, because matters of elections are dealt by the student government. Mr. Feld said having people who had never run for office across grades was a good way of reaching a wider consensus.

He also said that once the committee accomplishes its goal of establishing protocols and procedures, it will disassemble.  He plans to dissolve it after Agenda formally adopts election rules and guidelines, which would then be announced to the Just Community and amended to the student handbook.

The group initially expected to send its report to Agenda by Oct. 2, he said, but their tenure was extended due to a hectic early school year.

A version of this article in the print edition of The Boiling Point did not mention the reason Goldie Fields took votes by telephone.  She was told to do so by then-General Studies Principal Mr. Roy Danovitch, who was Just Community faculty adviser at the time.