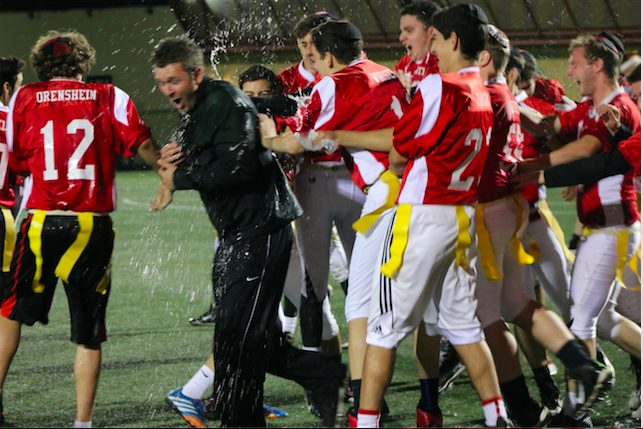 Missed call by referee lifts Shalhevet to victory after other calls went against Firehawks; final score is 15-14

By Zev Kent and Nathan Benyowitz

Helped by a controversial play near the end of the game, the Shalhevet Firehawks boys Flag Football team defeated AGBU of Winnetka 15-14 Nov. 5 at Crossroads Field, to complete their second straight undefeated league season and win the championship of the Coastal League.

The game had been close all the way through and Shalhevet had fallen behind, then made a fourth-quarter comeback. But in the last minutes of the game, AGBU was threatening to score, and running back Micah Gill faced a choice: whether to let the Titans catch a running pass to win the game, or commit a foul and hope not to be caught.

“If I hadn’t pulled the jersey, the game would’ve been over,” said Micah the next day. “I knew even if the ref called that on me, it would be better than giving up a touchdown.”

So he held onto an AGBU’s wide receiver’s jersey, preventing him from catching the ball and scoring a goal that would likely have given the game to the Titans.

“If you ask me now if I held it, I completely did hold him,” said Micah. “But it was a calculated risk. I knew if he got away the game would be over, and I had a chance of getting away with the hold, so I would do that 10 times out of 10.”

It was a dramatic ending to the team’s third season, one which the Firehawks had dominated, though they lost some games in the Loma Linda tournament against much larger schools. In the Coastal League, they won every time, besting Vistamar in the semi-finals Nov. 3, 27 – 7.

Two nights later, they again took home the championship plaque for the second year in a row, this time led by new coach Ryan Coleman. Once again, the championship was played on the home field of Crossroads School in Santa Monica.

The excitement of the game had started hours before the 6:30 kickoff time. During Town Hall, senior center Noah Rothman led a pep rally for the championship game.

“The pep rally really helped,” said Jacob in a pregame interview. “I can’t wait for the fans to come and cheer us on.”

Defensive lineman Edan Sokol expected the game to be tough.

“It’s going to be a physical game — we better be ready,” Edan said. “But I am an animal, so nothing scares me.”

Coach Ryan Coleman, who was not at the pep rally, was feeling relaxed and confident before the game began.

“Hungry,” said Coach Ryan in an interview. “I am relaxed and confident that if our guys play the way that they are capable of playing that we will take care of business.”

“I am feeling pretty good,” AGBU Coach Jack Keshishian told The Boiling Point prior to the game. “It’s been a good season and I am really proud of my kids.”

“I am pretty hyped up,” said Vayk. “I am happy with my team and happy to be in the championship game.”

The air was unusually crisp at 60 degrees and people had taken out their rarely worn winter coats. Head of School Rabbi Ari Segal finally got to wear the snow jacket given to him last year by the Finance Club.

But the Firehawks got off to a rough start. Quarterback Jacob Dauer threw an interception on the first play of the game and AGBU scored a touchdown.

Edan Sokol soon forced a safety, giving Shalhevet two points and the ball. Shalhevet was down 6-2, but after a defensive stop and an offensive drive led by Jacob Dauer, the Firehawks were back in scoring position when Jacob threw a touchdown to wide receiver Eitan Halpert.

Halfway through the third quarter, AGBU scored a touchdown off a Hail Mary pass that gave AGBU a 12-8 lead.

AGBU Coach Keshishian told the Titans to go for the two-point conversion, which they converted off a tipped ball by Shalhevet linebacker Sammy Ellenhorn, bringing AGBU’s lead up to 6.

But things improved for the Firehawks at the end of the third quarter. Shalhevet’s offense was in the red zone and the fans on the sidelines were going crazy with cries of “Lets go, Firehawks lets go!”

As the fourth quarter began, Shalhevet had a second down in the red zone. The Firehawks were unable to score, but the fans and the team never lost hope.

At this point AGBU fans started to chant, “I believe that we will win!” – feeling confident now that their team had won the game. But then, with about three minutes left to play, Shalhevet started driving and Firehawk nation started roaring.

Jacob Dauer capitalized on this opportunity, throwing for his second touchdown of the game to Eitan, tying the game at 14-14 with about 1:45 remaining.

Jacob then found Seffi in the back of the end zone on the extra point to give Shalhevet a 15-14 lead.

But AGBU wasn’t giving up either.

With about 1:30 left in the game and students, faculty and parents all standing and cheering for the Firehawks, AGBU started to drive. Sammy Ellenhorn and Micah jumped up in the air and deflected an incoming pass. It was then that Micah grabbed the Titan’s jersey, unnoticed by the ref.

Micah said that he did not consider what he did to be cheating because the actions of the referee, and human error, are always part of the game.

In the third quarter, he noted, the opposite had happened. Firehawk linebacker Kian Marghzar was called for a defensive hold while trying to pull a Titan’s flag. The player’s jersey was untucked so it looked like Kian reached for the jersey when in fact he had not.

“I was furious because I’ve been making that play for two years and the refs haven’t called [anything], and they called it in the most important game of the season,” said Kian. “That almost cost us the game.

“The rule that I’ve been playing for the past two years was if it’s clear that you’re going for the flag, the call shouldn’t be made.”

After two more defensive stops it was fourth down with 50 seconds left and AGBU had to go for it.

At this point Firehawk nation was chanting, “Defense, defense,” and the AGBU side was pretty silent, hoping for a miracle.

Sammy Ellenhorn and Micah Gill made the final stops and the Firehawks prevailed as Coastal League back-to-back champions.

After the game Coach Ryan – who will coach basketball and baseball later this season — was emotional as he was telling his team how proud he was.

Despite the loss, AGBU’s coach Jack Keshishian was proud, too.

“Coming in from last year finishing in last, to coming in second this year and having a chance at the title, I am very proud of my kids,” said Coach Keshishian.

Micah Gill tried to describe his feelings as the game ended.

“Unbelievable, almost at a loss of words,” said Micah. “From start to finish that game was a grinder. Our offense got the job done, but our defense won us the game tonight.”

Or perhaps more accurately – as in any game – the offense, the defense and the referees. 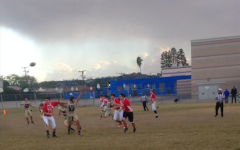 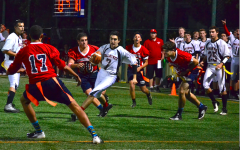