DESERT: Part of the name for the new Phoenix campus is ‘Nishmat Adin,’ after Rabbi Adin Steinsalt, z”l. The planned school is using a version of Shalhevet’s logo.

Shalhevet hopes to open a partner school in Scottsdale, Ariz., next fall, taking advantage of virtual teaching technology made familiar during Covid to help a growing but small Jewish community near Phoenix jump-start Modern Orthodox education there.

The school is being called Nishmat Adin-Shalhevet Scottsdale, and the plan is for students to attend Los Angeles classes via Zoom, with “educator/facilitators” on site with them in Arizona. It is now accepting applications for the 2021-22 school year.

Associate Head of School Rabbi David Block said officials would not be certain of the project’s status until after April. 1, which is the new school’s deadline to apply for admission.

“Until the application deadline passes and we see the level interest, we won’t have a full sense of what this will look like,” Rabbi Block wrote in an email response to Boiling Point questions today. “But, we’re excited that the partnership has garnered significant interest among many Scottsdale families, and we’re feeling optimistic. “

According to a 2019 report from Arizona State University, the number of Jews who are known to Jewish organizations in Maricopa County (where Phoenix and Scottsdale are located) has grown by 19 percent since 2002, to 98,750. Meanwhile, the percentage of school-age people in that group who are enrolled in fulltime Jewish day school has grown from 14% to 22%. The percent identifying as Orthodox has held steady during that time, at 3%.

Twelve Phoenix-area families were represented.  Urging attendees to spread the word about the plan, Scottsdale parent Scott Stein compared families involved in founding the new school to pioneers who settled the West.

“Nothing makes a good pioneer party like more pioneers, as the saying goes,” Mr. Stein said.

Shalhevet High School, located in Los Angeles California, has partnered with the Scottsdale Jewish community to provide a Jewish High School experience for students in Scottsdale.”

Although not widely discussed at school, the Scottsdale plan was disclosed last month in an email sent to current Shalhevet parents in Los Angeles. Signed by Rabbi Block, Rabbi Segal, Mr. Weslow and Chief Operating Officer Ms. Sarah Emerson, the Feb. 18 email described the plan as a “raw idea” and said “it’s still just a possibility.”

“The thoughtful and diverse Jewish community in Scottsdale, Ariz., has limited options for Jewish high school,” stated the email.  “What’s missing is a place that caters to the Modern Orthodox community — both in terms of hashkafa [religious ideology] and demographic.”

According to an article in the Jewish News of Greater Phoenix and Northern Arizona, also involved is Mr. Jeff Klores, father of Shalhevet alumnus Joseph Klores ‘20.  Mr. Klores moved from Phoenix to Los Angeles for four years so Joseph could attend.

“I hope this opens up opportunities for families in Phoenix so that they don’t have to be faced with the same kind of decision that I had,” Mr. Klores told the Jewish News. The Boiling Point was not able to reach Mr. Klores independently.

Also in the email, Los Angeles Shalhevet officials estimated that eight to 10 students going into ninth and 10th grades would take part in the new program during its first year. The new school’s website said Arizona students would come to Shalhevet Los Angeles once a month for three to five days.

“Scottsdale students would Zoom into some of our classes (and be full remote learners), participate in clubs/co-curriculars that are amenable to online engagement, and would even join our students in-person multiple times throughout the year,” the email states.

The website envisions a school that meets mostly in Scottsdale but is immersed in Los Angeles school life as much as possible.

It says the LA campus “has invested heavily in making the remote learning experience as interactive as possible,” but that it will be different from “Zoom school.”

Students in Arizona would have academic staff with them on site, though the exact location of the Scottsdale campus has yet to be announced.

“With a strong focus on the social experience, Shalhevet Scottsdale students will come together in classrooms on a campus (with the guidance from on-site academic coordinators/facilitators),” states the website. “While most courses will be remote learning, the in-person facilitators and OWL technology will create a more engaging environment than remote school alone.”

It says students would be able to join co-curriculars remotely “when feasible” and  “will also have the option to develop additional clubs locally if of interest.”

Shalhevet Scottsdale would not be the only Jewish high school in the Scottsdale-Phoenix area, and another new high school is slated to open in the fall of 2022.

A third Jewish high school — the Oasis School, co-ed and non-denominational —  was scheduled to open in fall 2021.  But according to media reports, its opening has been postponed until fall 2022 due to the pandemic.

Asked what impact that timing might have and what the relationship between Oasis and Shalhevet Scottsdale might be, Rabbi Block said they’d serve different communities.

Nishmat Adin, which means “soul of Adin,” refers to the late scholar and educator Rabbi Adin Steinsaltz, z”l, author of The Thirteen-Petaled Rose, A Guide to Jewish Prayer and the 22-volume Steinsaltz Edition Talmud.

The Shalhevet Scottsdale website says its philosophy would be rooted in four education principles, or “pillars,” articulated by Rabbi Steinsaltz.

The pillars, it said, are “Ahavat Israel – unconditional love for every Jew,” from Vayikra 19:18; “The Divine Presence dwells only in a place of happiness” from the Talmud, Tractate Shabbat 30b; “The most important thing is deed,” from Pirkei Avot 1:17; and Rabbi Steinsaltz’s phrase “Let my people know,” a motto of his educational institutions in Israel.

Rabbi Steinsaltz founded several schools in Israel. It was not known whether Shalhevet Scottsdale might be the start of a similar network modeled on Shalhevet’s example.

We envision that Scottsdale students might Zoom into our Town Halls initially, and — using the tools and methodology they learn and experience — might eventually create their own Just Community in-person in Scottsdale.”

The new school’s website includes a section on the academic program at Shalhevet Los Angeles, with descriptions of Town Hall, the Just Community, and Community Service on its third page. Those pages also include the L.A. school’s logo, with the school’s full name — Jean & Jerry Friedman Shalhevet High School.  Other than that, the Friedmans are not mentioned on the website so far.

However, the Just Community section does mention Prof. Lawrence Kohlberg, whose theory of moral development was one of the founding principles of the Los Angeles school that Dr. Friedman opened in 1995.

While not described as components of Nishmat Adin, Rabbi Block said it was possible that the Arizona-based students would do something similar on their own.

“We envision that Scottsdale students might Zoom into our Town Halls initially, and — using the tools and methodology they learn and experience — might eventually create their own Just Community in-person in Scottsdale,” Rabbi Block told the Boiling Point after the Zoom parlor meeting.

Officials said there would be several benefits to Shalhevet Los Angeles from the new arrangement.

“COVID has caused financial strain, and while we’re still doing well, it’s our responsibility to look for additional, creative sources of income (to help keep our school financially stable, to help expand and grow our offerings, and to help keep costs for families down).” stated the Feb. 18 email to parents.

Two others were being at the “forefront of educational innovation” in terms of hybrid learning and “learning from the experiences of those who don’t come from their same community.”

Also on the list in the email were “We get to share our incredible faculty” and “We can give others access to our rich Judaic Studies program.”

For people in Scottsdale, it’s a matter of offering something to their next generation.

Scottsdale parents, the email said,  “deeply want to provide their children with a thoughtful approach to Judaism and meaningful Torah learning, all alongside a rigorous academic experience.

“While the desire for such a school is there, the numbers aren’t,” said the email to parents. “While their community works on building a school as more and more children come of high school age, there are still a handful of students who, in the meantime, crave a thoughtful, Modern Orthodox education. That’s where we come in.”

CORRECTION: An earlier edition of this story misstated which year Joseph Klores graduated from Shalhevet. He graduated in 2020 not in 2021. The Boiling Point regrets the error. 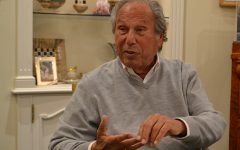 Dr. Jerry Friedman and the roots of Shalhevet democracy 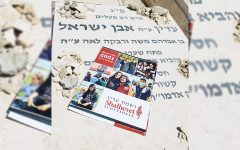