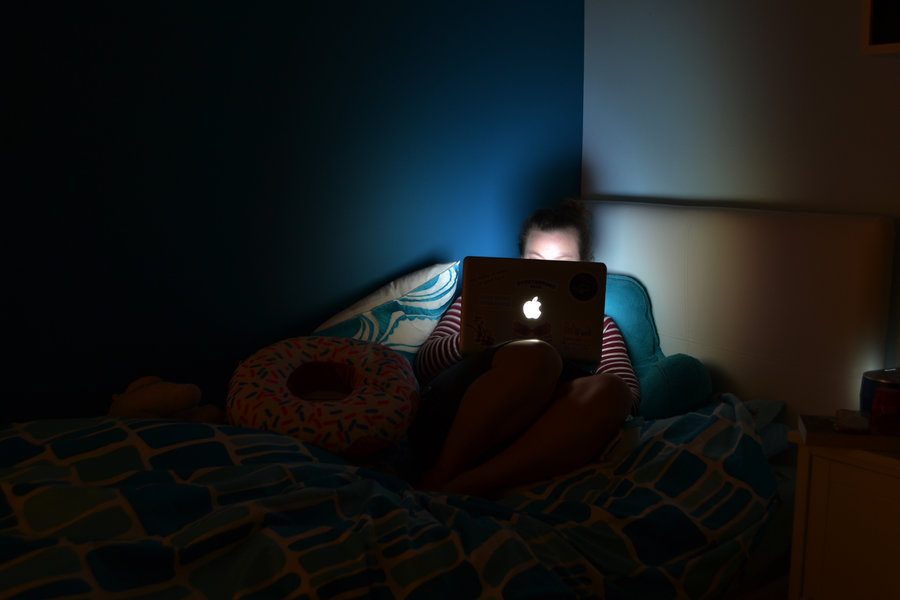 GLOW: According to SAS Psychology teacher Ms. Tove Sunshine, binge-watching affects the brain in ways similar to other addictive pursuits.

A pitch-dark bedroom is illuminated by a small screen for episodes and episodes on end. One, two, three hours of lost sleep before a long day at school.

With the new 24/7 availability of online streaming through platforms such as Netflix, Hulu, and illegal websites has come a new media addiction – “binge-watching,” the practice of watching multiple episodes of a TV show in one sitting or over a short period of time.

Gone are the days of delayed gratification traditionally associated with watching television, as people can now watch any show at any time.  Like binge-eating a whole box of cookies, binge-watchers of TV may feel a lack of control as they irresistibly click the “Next Episode” button countless times.

The recent surge in popularity of streaming networks has also had economic repercussions for the cable and movie theater industries, according to reports from various box office websites and cable companies, threatening an out-of –the-house activity many students still enjoy.

Further, experts say the phenomenon impacts viewers of all ages both psychologically and physically, while also making it harder to get other work done.

“I stay up really late each night, I get home and all I want to do is watch T.V., and then I watch for hours, I get no sleep, and then I get sick,” said sophomore Noa Kligfeld, who watches mostly Netflix, namely.

“I guess you want to keep pressing a button if it’s a good show,” said Shannon, who watches Grey’s Anatomy and Vampire Diaries. “It’s not like a movie where you get an ending so fast, but you still want to know what happens.”

In a Boiling Point poll of 120 students last fall, 42 percent said that they frequently engage in binge-watching a show, with 63 percent of the bingeing occurring on Netflix.

Out of the millions of television shows available to stream, some of the most popular among the student body are Grey’s Anatomy, Friends, and Game of Thrones.

Students their binge-watching habits for a decline in their homework productivity and health.

Although binge-watching may have negative psychological effects on teenagers, this has not been determined for certain, according to SAS Psychology teacher Ms. Tove Sunshine.

“I think we can recognize that it can perhaps become compulsive enough because basically the behavior of doing it is getting reinforced over and over again,” Ms. Sunshine said, adding “ It could potentially become so compulsive that maybe you are doing it in a manner that is problematic in your life.”

She went on to describe the psychological process that occurs when one binge-watches.

“Binge watching has certain similarities probably in brain activities to other somewhat addictive pursuits,” she said. “You’re getting visceral emotional kinds of reactions being processed through the midbrain part of your brain, called the limbic system, which stimulates that part of your brain referred to as your rewards center. That being stimulated tends to be reinforcing for a behavior.

“Whether that is putting a coin in a slot machine or clicking the next episode, you’re getting that kind of internal brain reward from this pleasure you’re getting from watching it,” she said.

That can make it harder to stop.  To students, it feels like a lack of self-control.

“It’s so easy to just go on Netflix and just watch movies and TV instead of doing your homework that it takes so much self control to not do that,” said sophomore Honor Fuchs, who mainly watches Brooklyn Nine-Nine and New Girl on Hulu adding, “A lot of people just don’t have that.”

Honor thinks part of the fault lies in the television industry, which like any author, wants people to “stay tuned.”

“They purposefully leave you on cliff hangers, making it so you have to watch the next episode,” said Honor.

Beyond Shalhevet, the phenomenon appears to be even worse. According toVariety.com, 70 percent of Americans engage in binge-watching. But some students prefer not to.

Senior Tom Bohbot said that he barely watches television, because he prioritizes other things such as homework and hanging out with friends.

He also said that teenagers watch television obsessively because of the convenience and minimal effort it requires.

“They don’t have time to hang out with friends,” Tom said, “so they just binge-watch shows. It’s easier because you can do homework while you binge-watch .”

Meanwhile, binge-watching has taken a national toll on both the movie theater and cable industries.

According to businessinsider.com, a third of American households have online streaming subscriptions, most to Netflix, and online streaming platforms’ revenues increased by 29 percent in 2015 to $5.1 billion.

Twenty percent of surveyed Shalhevet students and 25 percent of American households do not have a cable subscription, following a national trend of “cutting the cord.”

Additionally, described by Vanity Fair as “an industry in crisis,” movie theaters’ annual box office sales have decreased by more than $88 million in the last decade.

Still, about half – 52 percent – of Shalhevet students still prefer going to the theaters over watching at home.

“It’s an experience,” said junior Jacob Perelman. “The loud noises and the bright screen and seeing everyone else’s reactions to different scenes in the movie is really important in my movie-watching experience.”

But senior Ezra Fax, who spends two to three hours watching Netflix daily watching shows such as 30 Rock, New Girl, and Parks and Recreation, said he is more likely to watch Netflix at home than go to the theaters, mostly because it is more convenient –  even though he enjoys the movie-theater experience as well.

“Sometimes I just like to be at home by myself and sometimes I like to go out with friends and see a new movie,” said Ezra.

Most students described their binge-watching habits as a way of forgetting their daily stresses, at least for a while.

“For high schoolers, it’s kind of like an escape,” said senior Dana Alkoby, who watches two to three hours of Netflix daily, watching shows including How I Met Your Mother, Friends, and Gilmore Girls.

“You’re so stressed out, and you have so much work and family and it’s just one thing where you can just zone out.”

Ms. Sunshine said that teenagers can find this escape in multiple ways, and added that reading an engaging book is similar to binge-watching in that they both provide one.

“When you’re watching something continuously like that it becomes very immersive,” she said. “We do it any way, in a movie or with a good book, and with binge-watching you can have that experience for hours and hours and hours.”

Some students simply accept binge-watching as a new way of life that has come with these new platforms.

However, Ezra disagreed, suggesting that viewers should take control of the matter.

“It’s a matter of conviction and motivation,” he said.  “If you let the TV control you, you’ll never stop. It’s about taking control of priorities and doing what matters most before you can have your leisure time.”

Catherine Fransen, behavioral neuroendocrinologist and professor in the Department of Psychology at Longwood University in Virginia, writes about the psychology of binge-watching in an article on The Huffington Post. She credits peoples’ need to continue watching to the dopamine rush that it provides.

“Finishing a number of episodes, or even a whole series allows us to feel as if we have completed a task, which causes a surge of dopamine release in our brains,” Dr. Fransen writes. “This dopamine then motivates us to keep watching more, creating a feedback loop that is seemingly never ending.”

Certified life coach and blogger Michael Pollock wrote about his own journey overcoming a television addiction on his blog.

He breaks down the solution to binge-watching into four steps, the first being to keep track one’s time spent watching television, the second to define one’s mission in life, the third to acknowledge the problem in the television addiction, and the fourth step being to find alternatives to watching.

In his post, Pollock writes, “When you feel this deep sense of purpose and that you have a mission in life, it’s much easier to let go of anything that distracts or takes time away from it.”

A dark room illuminated by a laptop screen for several hours on end seems to promise a gain for society – limitless television streaming options, allowing for a greater chance to escape, to enter an alternate world for some time.

However, this dark room can represent other things as well: loss of sleep, loss of focus, loss of social time and activity.

The question still unanswered is whether people will still find ways to be productive, or whether the price of that promise will be this new form of addiction.