SCREEN: A Google Hangouts window shows IT Director Nick Parsons testing the web application for the online class trial set for Monday. School officials have planned a “preparedness drill” in case school closure is needed because of coronavirus.

School on Monday will be held via Google Hangouts as a test for a possible future school shutdown over the coronavirus outbreak, administration announced in an email to all students, parents and faculty late this morning.

Associate Head of School Rabbi David Block and Principal Mr. Daniel Weslow both signed the email, which announced what officials are calling a “preparedness drill” as schools around the world are closing their doors to protect students from the new virus, also known as COVID-19.

Rabbi Block said that the administration wanted to troubleshoot the system to be ready if that happens here. 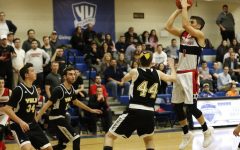 “In case it’s not wise for students to be in the building and we want to continue school and learning remotely, we want to make sure we have the system set up to have the most efficient learning,” Rabbi Block said in an interview with the Boiling Point. “And we have technology in the world that can help us do this, but there’s always a learning curve.”

The joint email said that if school were to actually be closed, students should daven at their homes even though they would not have a minyan (a quorum of prayer). But it said they should daven Mincha at local synagogues on Monday — which is Ta’anit Esther, a fast day that leads up to the very festive holiday of Purim.

Purim is Monday night and Tuesday. The email said that the celebration scheduled at school for Monday night would still be conducted as planned.

Rabbi Block said the school intentionally chose Taanit Esther — a daylight-only fast observed on the day before Purim — for the trial run.  The school day was already planned to be shorter, with class ending at 1:15 p.m. followed by Mincha until 1:55. The Preparedness Drill schedule has school ending at 1:10 p.m.

Also, he said, setting it for next Monday would give faculty enough time to prepare for teaching remotely.

He acknowledged that fasting students might not be as active as during a day where they may eat.

“We always tell teachers ‘be a little more sensitive if students are fasting, if they’re not feeling well,” said Rabbi Block. “They might be a little bit more lethargic.’ We’ll do that again.

“And I think we’ll take that into consideration when we evaluate the situation…. If they say that student engagement was not what we wanted it to be, if we can attribute that to a fast day then obviously we won’t sound any alarm bells.”

The email also included an instructional PDF created by Director of IT Nick Parsons, describing how to use Google Hangouts on Monday.

“Teachers will post a Google Hangout Link on Schoology,” the PDF states. “Teachers may uhtilize the chat panel for you to write and ask questions. A student may be selected as the ‘TA’ for t

he meeting and they will be responsible for relaying important questions to the Teacher.”

Most teachers found out about the new plan in the same email sent to the community, and had not yet planned how they would conduct their classes.

“I need to ask if I can write on a board or on my laptop so they can see the problems,” said math teacher Ms. Jennifer Kong. “I don’t even know if I can just teach normally. Maybe I’ll do something similar to Khan Academy with the writing on white boards “

“I was just told, so I honestly haven’t even had the chance to think about class,” said science teacher Dr. Elizabeth Basheer.

According to Rabbi Block, attendance will be taken at the beginning of each class and normal policies for students leaving classes will apply.

“I would imagine that stepping away from the computer or even logging out would be akin to leaving class, which is acceptable obviously in many situations — to use the restroom, to take a 30-second breather or whatever it is,” said Rabbi Block.

Three other Jewish day schools in the country have announced temporary closures due to the outbreak: Salanter Akiba Riverdale (SAR) High School, Westchester Torah Academy, and Westchester Day School, all located in the New York area.

Around the world, more than 290 million students in 22 countries are experiencing school closures either locally or nationally due to the spread of the virus, according to UNESCO, the United Nations Educational, Scientific and Cultural Organization.

I think that the school is being very smart and taking precautions very seriously when coming to this virus even though it hasn’t impacted our school yet. I think that it’s good that they’re having a trial period because then we’ll see if it works or doesn’t work.”

“It’s better than doing nothing all day. I think we’re all really bored and having classes in the middle of the day is helping with that.”

Mr. Parsons, who is overseeing the online class test as the IT Director, said that he chose Google Hangouts as opposed to other platforms like Zoom and GoToMeeting because it has fewer complex features. Also, he said, Shalhevet’s email is Google based, meaning everyone has a Google account, which includes quick access to Google Hangouts.

He said that Google was making many of Hangouts’ premium features free to schools due to the health crisis, notably the ability to have more than 10 users in a Hangouts session at a time as well as the ability to record sessions — which teachers can then use to post the class recordings section on Schoology or Google Drive.

“As of yesterday that hadn’t been rolled out to us yet,” Mr. Parsons said. “But Google says they’re rolling all of those features out to us the next couple of days, so in theory — knock on wood — it’ll be available by Monday.”

Mr. Parsons was available in Room 204 during lunch period today to help teachers prepare for online classes Monday, and said he will also be available Monday remotely for whoever needs additional help.

“We’ve done our best to create handouts for teachers and students, doing tutorials, one-on-one meetings,” he said. “Google Hangouts is a pretty simple platform, which is nice.”

He also said he was in contact with IT Directors from other schools who are either currently or planning on implementing a similar online class structure.

According to the Centers for Disease Control there are currently 36 reported cases of coronavirus in California and according to the LA County Department of Public Health there are 11 cases in LA county, none at Shalhevet.

However, 51 students attended the The American Israel Public Affairs Committee, where there were fears of potential spread. 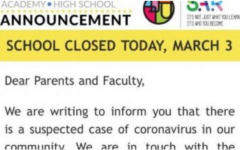 In an email from AIPAC to all attendees, the organization said it had been told by the the DC Health Department that any exposure at the conference was considered low-risk.

Rabbi Block said the preparedness drill was not in response to AIPAC concerns.

“We wanted to be ahead of the game,” said Rabbi Block. “It really wasn’t AIPAC.”

Student opinion of the plan for remote classes was mixed.

“If it does get to the point where we need that, that would be ok, but I don’t think we need it on Monday, said freshman Zach Rub. “I think that that should only happen if there is a case of corona right near here.”

“I don’t think anyone’s going to be able to pay attention online and I don’t think out tuition should be going toward online school,” said Michael.

Junior Gaby Bentolila said that the school could learn from this trial run.

“I think that the school is being very smart and taking precautions very seriously when coming to this virus even though it hasn’t impacted our school yet,” said Gaby. I think that it’s good that they’re having a trial period because then we’ll see if it works or doesn’t work.”

English teacher Ms. Na’amit Nagel said that she was worried that having online classes could potentially cause panic.

“I think it’s great that the school is being so proactive thinking about the next couple of months,” said Ms. Nagel. “And I think it’s a really good idea to train teachers on how to use Google Hangouts and have us try out our classes… I don’t love the idea of pre-quarantining, especially because the one thing that everybody keeps saying is stay calm and I think it could cause anxiety that is unnecessary.”

I don’t love the idea of pre-quarantining, especially because the one thing that everybody keeps saying is stay calm and I think it could cause anxiety that is unnecessary.”

Rabbi Block said the administration is taking steps to decrease panic in the community including the wording of their emails and inviting students for sessions with school counsellors Esther Rbibo and Gabriela Marcus.

“This is just a drill,” said Rabbi Block. “We just want to be on top of it. But there is no reason to assume that we’d have to do this or that we’re going to do this.”

Principal Weslow has issued tests for other programs in the past, including the late start alpha test conducted last year.

“I think there’s value in kind of alpha-testing or even beta-testing these ideas from time to time,” Mr. Weslow said last May regarding the late start experiment, “to ensure that we maximize the student experience both from a teaching and learning standpoint, but also from a human development and wellness standpoint.”