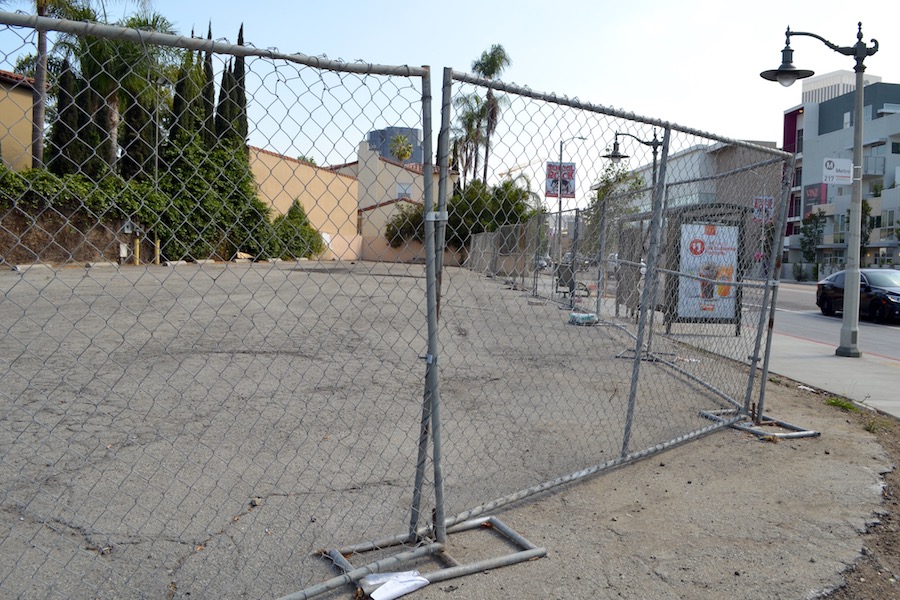 OLD: Used by students until four years ago, the student parking lot is set to undergo renovations including a new fence and shrubbery. BP photo by Neima Fax. ( )

OLD: Used by students until four years ago, the student parking lot is set to undergo renovations including a new fence and shrubbery. BP photo by Neima Fax.

Approval by city panel not yet in writing; lot may not be available until after holidays

Long-awaited access to the old student parking lot will most likely be delayed until after the chagim, school officials announced last Thursday, dashing the hopes of student drivers, carpoolers and long-distance commuters less than a week before the first day of school.

According to an email sent only to parents Aug. 23, the school is waiting for written approval from the Carthay Circle Historic Prevention Overlay Zone (HPOZ) board — part of the Los Angeles Office of Historic Resources — and completion of the fence and plantings that the board okayed on Aug. 16.

“We just received final approval” to use the lot across the street from campus, Principal Mr. Daniel Weslow wrote in the email.

“So at this point, literally today, Thursday at 11:15, a week after the meeting, we are still waiting on the final written approval from the city. But we have verbal approval.”

“However, they did ask us to confirm with the city planner the appropriate height of the fence before utilizing the lot on a regular basis,” Mr. Weslow wrote. “As soon as we have formal approval in hand, which is imminent, we will be taking full advantage of this lot.”

Available sooner, however, may be the parking lot at Tom Bergin’s Restaurant, the school’s immediate neighbor to the north on Fairfax Avenue. Mr. Weslow’s email said Shalhevet was “close to finalizing a deal” with the Irish pub, which has 22 parking spaces and is open only on Thursday, Friday and Saturday nights from 5 p.m. to midnight.

Tom Bergin’s had not responded to school contacts last spring, but over the summer negotiations began.

“We have continued talking to them and will likely be able to arrange parking,” said Head of School Rabbi Ari Segal, who had tried unsuccessfully to reach them last spring.

The old student lot, located at the northwest corner of Fairfax Avenue and San Vicente Boulevard, was used only by Shalhevet students from the time the school moved into its old building in the fall of 1999 until the summer of 2014, when Shalhevet moved temporarily into the Westside Jewish Community Center.

Exactly what is holding things up now is not entirely clear.  A spokesman for the Carthay Circle HPOZ board has not yet replied to Boiling Point questions.

Shalhevet Chief Operating Officer Ms. Sarah Emerson said the Carthay HPOZ board, which meets twice a month, approved the school’s proposal for a new fence and shrubbery on Aug. 16, and should have sent the approval in writing right after that.

“We are still waiting on the final written approval from the city,” said Ms. Emerson. “But we have verbal approval.”

Whenever it comes, Ms. Emerson believes that that wait combined with the time needed to complete work on the site means it may take until after Sukkot, which ends Sept. 30, for the old student lot to be opened. She called that a conservative estimate and hopes that it may be ready sooner. 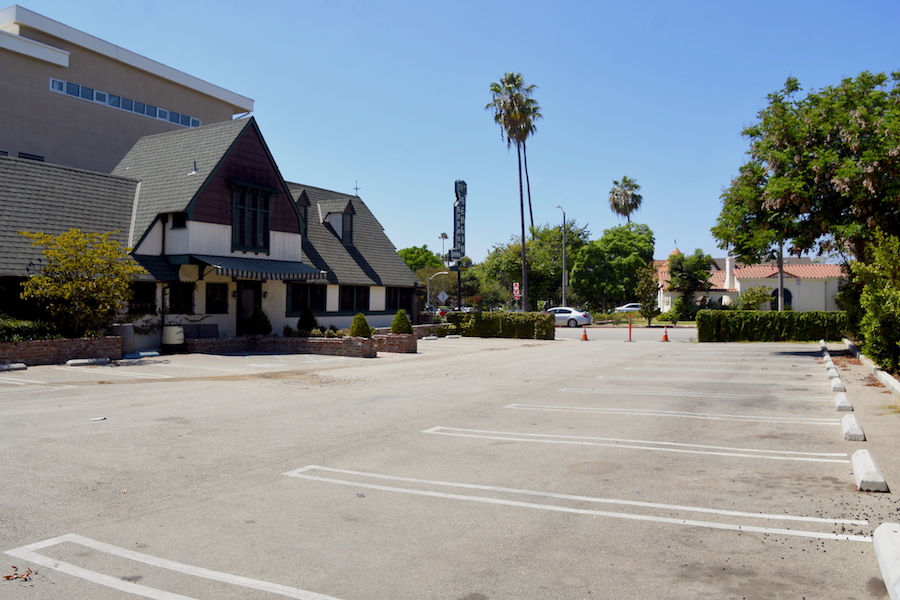 PUB: Tom Bergin’s restaurant is open only on Thursday and weekend evenings, and has 22 spots Shalhevet is negotiating to use. BP photo by Neima Fax.

Mr. Weslow did not disagree.

“I used ‘imminent’ in a broad sense,” Mr. Weslow said in an interview on Friday.

Ms. Emerson also said school officials have yet to come to a decision on questions including whether there will be security and what time the lot will open and close.

Also unresolved is just who will be able to park in both lots, the school lot and Tom Bergin’s.

To help decide, Mr. Weslow’s letter contained a survey that asked for the names of students hoping for parking spaces. Rabbi Segal said if there were more drivers than spots, it would be up to the Agenda Committee to allocate them.

Rabbi Segal said that at the moment, the administration is not looking at making a long-term decision on its own.

“We’re just trying to get a sense overall of how many spots we need,” Rabbi Segal said in an interview with the Boiling Point Aug. 24. “I think we’ll give that information to the Agenda Committee and ask them.”

However, an interim solution will be provided for the Tom Bergin’s lot if it becomes available. Mr. Weslow said administration would allot the Bergin’s spots, favoring seniors, long-distance commuters and carpools.

“I’d like to believe that students follow all of our requests and are not crossing where they shouldn’t be. But I’ve seen and know that students sometimes make poor decisions about that when they’re running late for a class, or they don’t see oncoming traffic.”

Once the old student lot is available, the Agenda Committee and the Just Community would begin discussing a long-term decision for both lots, Mr. Weslow said.

Meanwhile, Rabbi Segal also said there are also five to 10 teachers who can’t get into the on-campus faculty lot,  and that spots also need to be reserved there for guests as well.

Some thought the Tom Bergin’s lot could be used for those, since they’re so close to school. But the head of school said he’d rather give students the Bergin’s parking so that fewer students would have to cross busy Fairfax Avenue.

“I’d like to believe that students follow all of our requests and are not crossing where they shouldn’t be,” Rabbi Segal said. “But I’ve seen and know that students sometimes make poor decisions about that when they’re running late for a class, or they don’t see oncoming traffic.”

That would mean spots could be reserved in the old student lot — ironically — for teachers.

Until Thursday’s email was sent out, students had been anticipating a back-to-school end to several years of either scrounging for metered parking on surrounding streets or paying $15 for all day at the Peterson Automotive Museum on Fairfax and Wilshire, two blocks north of the school.

Any spaces at all for Shalhevet students will end four years of improvising that was originally expected to be just two. When Alliance Residential purchased two-thirds of Shalhevet’s old location in 2013 — which encompassed everything from the north end of the current building to the corner of San Vicente on the south — it was agreed the student lot could be used for construction trailers during what was expected to be a single year of construction of the Vinz, the 184-unit apartment complex recently completed at the northeast corner of San Vicente and Fairfax.

In exchange for using the lot for its trailers during construction, Alliance agreed to return it to Shalhevet in better shape than it received it, according to Ms. Emerson.

“Because I’m from the Valley, there’s often a lot of traffic and it’s quite unpredictable at certain times, and if I don’t find a parking spot across the street, which is free, then I run the risk of getting a ticket by parking on San Vicente.”

But permit troubles delayed by a full year the start of construction on Shalhevet’s building. It was built in just one year, as planned, but then the Vinz took two years to finish instead of one, opening last February.

With the completed Vinz and its apartments for rent, students were getting excited to finally have an easily accessible place to park.

“Because I’m from the Valley, there’s often a lot of traffic and it’s quite unpredictable at certain times,” said senior Donna Grunfeld, who lives in Sherman Oaks. “And if I don’t find a parking spot across the street, which is free, then I run the risk of getting a ticket by parking on San Vicente.”

She said Mondays had been a particular problem because of area parking restrictions for street-cleaning.

“I think having a parking lot would make Mondays a lot easier,” Donna said. “Parking is literally impossible on Mondays.”

Currently, the lot is empty, surrounded by a chain-link fence with overgrown weeds and uneven asphalt with cracks in it. When last used, it had 23 spaces, according to Boiling Point archives, and was just an easy walk across the street from Shalhevet.

With construction of the Vinz, a 200-foot left hand turn lane has been added to Fairfax, which could take away a few spots. 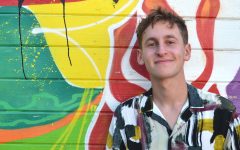 Some people have to discover their interests; others have no choice but to follow them. Jacob Joseph Lefkowitz Brooks has been a member of the Boiling Point staff since the first semester of his freshman year. He soon found a love for journalism and became the paper’s Arts & Culture editor the next semester, moving on to Features editor in his sophomore year, and Community Editor and becoming a member of the BP's Editorial Board his junior year. Jacob is now the paper’s Editor-in-Chief as well as director and creator of its forthcoming new magazine. Jacob is an avid moviegoer as well as a diehard fan of the Toronto Blue Jays and Raptors. 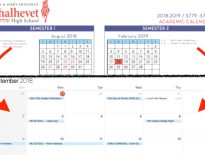 Community VIDEO TUTORIAL: How to import the school calendar … 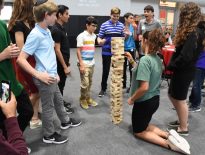