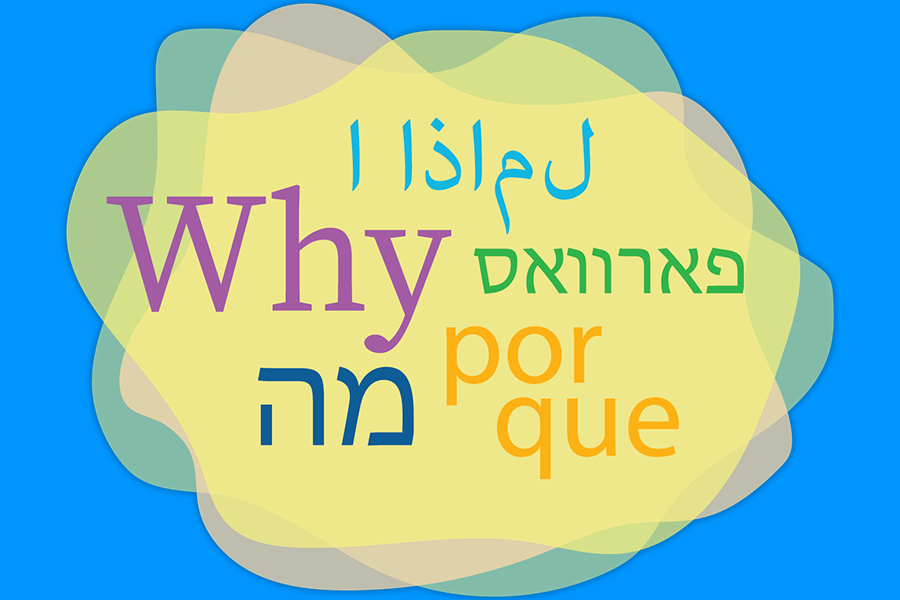 ASKING: Among other questions, Passover — which starts this Saturday night — wonders why the seder night is different from all others. (BP Graphic by Ezra Helfand)

ASKING: Among other questions, Passover — which starts this Saturday night — wonders why the seder night is different from all others.

How is your seder different from all other seders?

For a range of customs, the Boiling Point interviewed 10 students and discovered Passover traditions from Spain, Iraq, Libya and all over Los Angeles.

“Really long,” “matzah pizza,” and “cleaning” are words linked to Pesach in most of our minds. But another buzzword that may pop up when thinking about the Jewish holiday that starts this Saturday night is simply “traditions.”

Considering the 15-part seder, it’s not surprising that different families follow different parts of this central Passover observance in their own distinct ways.

Focusing in on three well-known parts of the Pesach seder — Ma Nishtana, Dayenu, and searching for the Afikomen — the Boiling Point gathered information from 10 Shalhevet students and found a variety of customs to share with our readers. We’d love it if you’d share yours — see instructions at the bottom!

Also known as the Four Questions, “Ma Nishtana” is recited at the start of the Maggid section of the seder, which is the central section focused on telling the story of the Jews leaving Egypt. The questions begin by asking “Why is this night different from all other nights?” and proceed to explain how the seder night is unique. Many families assign this to the youngest kids present.

Sophomore Ella Ashkenazi has grandparents from Iraq. When it comes to Ma Nishtana, the youngest children begin the song.

“Usually my aunt will pick a little kid from my entire family and she’ll tell them to start singing and then everyone will join in,” said Ella.

We have this fun tradition where people will go around and sing it in different languages that they know.”

“When we have the seder with my mom’s side, we have this fun tradition where people will go around and sing it in different languages that they know,” Rami said.

“My grandma was a Spanish teacher, so she’ll sing it in Spanish and my aunt will join in,” Rami said. “One year my sister learned it in Yiddish and she sang it. If we have someone come to our seder that’s not usually at our seder, we ask them if they know it in any other languages and they’ll sing it if they know it.”

“The youngest person who knows Hebrew says it and everyone ends up joining in,” Sara said.  “Usually the little kids that come over, some of them don’t speak Hebrew, so I usually say it for my family.”

Junior Carin Arbib has Libyan grandparents, and the youngest children in her family are not involved in Ma Nishtana at all.

“My mom wants to sing it,” said Carin, “but then my grandpa just says it fast in Hebrew and then he says it in Arabic too.”

And at freshman Leeyah Klyman’s seder, Ma Nishtana is sung by everyone.

“We just sing it all together and everyone participates together,” said Leeyah. “My youngest sister sings it a bit, but she needs help every now and then so it’s mostly all of us.”

Dayenu – From super-serious to ‘all hell breaks loose!’

Dayenu — “It would have been enough if…” —  is also in Maggid — is a song of gratitude. It repeatedly states “it would have been enough if…,” and then lists the many miracles involved in the Passover story. Some Sephardic families have the tradition of hitting one another with green onions while reciting the song to mimic the whipping of the Jews during their enslavement in Egypt.

“We all just sing it together,” said Ella Ashkenazi. “We go really with the book.”

Andrew Petlak, Joey Blumofe, Rami Melmed and Leeyah Klyman also sing it all together with their family. Maile Asiss’s family does the same.

“Usually we have one person say it pretty quickly, because it’s a pretty long part in the haggadah, and then the rest of my family will come in for when you say ‘dayenu,’” Maile said.

“We usually say it all together in Hebrew and then we say it in English,” Sara said. “We sing the first verse and recite the rest.”

Carin Arbib experiences Dayeinu in two different ways, Persian on her mom’s side and Libyan on her dad’s.

“With my Libyan family they take it super seriously and my grandpa recites it,” said Carin. “He’s super serious about saying every single thing clear and good.”

“First, my uncle reads the whole thing,” Miriam said. “Then we cover the table so nothing spills.

“Then, all hell breaks loose. We’re not just hitting each other, we’re also throwing things and smashing the scallions to get the disgusting onion juice out.”

The afikomen is the larger side of the middle piece of matzah that was split during the Yachatz portion of the Seder and set aside for “dessert” later; afikomen means dessert in Greek. The finding of the afikomen is a tradition and game for children: an adult hides the piece that is saved for dessert and in exchange, the child who finds it wins a prize or is given money after yom tov.

“Usually my grandpa will hide it somewhere in his house and all the grandkids will go look for it,” said Ella Ashkenazi, whose family sets the prize for finding the Afikomen at around $100.

“He says only the grandkids under 18 can look for it, because he doesn’t want to give the prize to the older kids.”

At junior Andrew Petlak’s seder, the finding of the afikomen ends in prizes for all.

“For boys it’s baseball cards and for girls the prize might be a stuffed animal or game or something like that,” Andrew said. “All of the kids go out and find it but in the end we all get prizes, if we find it or not.”

At Maile Asiss’s seder the prize is a gift or gift card and. But she herself no longer searches for the afikomen.

“We have outdoors off-limits and keep it indoors only and mostly on the first floor of the house,” Maile said. “I used to look for it. Now I help my mom find it, because I’m 17 now.”

Freshman Rami Melmed has to meet two challenges to win the prize.

“Some time during the seder, my dad will hide the afikomen and we have to find it,” said Rami. “If we find it, then we have to hide it,  and if my dad can’t find it then we’ll get the afikomen prize. If he does find it, then he says he won’t. But he usually gives us something anyway. It’s a lot of fun.”

I still look for it, I can’t ever find it though. My dad usually hides it and he’s very good at it.”

Sophomore Zach Rub’s prize increases as he gets older.

“We are very serious about it,” Carin said. “We do two or three rounds where someone hides the matzah and we find it and they give us money as the prize if we find it. The prize is around $30.

“It takes us like 20 minutes to find it,” she added. “One time my uncle hid it in the crease of a door and we were looking everywhere and we couldn’t find it, and I found it in the end.”

Joey Blumofe has a similar struggle.

“I still look for it, I can’t ever find it though,” said Joey. “My dad usually hides it and he’s very good at it. He hid it one time behind the breakfront, where we would’ve never guessed.”

On the other hand, junior Sara Adatto’s family does not have the tradition of finding the afikomen, it’s something that was never done on her dad’s side of the family.

“In my family, we actually have a thing where we just don’t hide the afikomen,” Sara said. “I don’t know how that started but it’s just been in my family for a long time.”

As you can see, Passover is more than Bissli or deep cleaning. Whatever your traditions are, cherish them for making your family your family!

Please comment below customs particular to your family on Pesach! We’d love to share them with the community. If you do, please mention the city you live in and your first name and last name or initial when commenting.