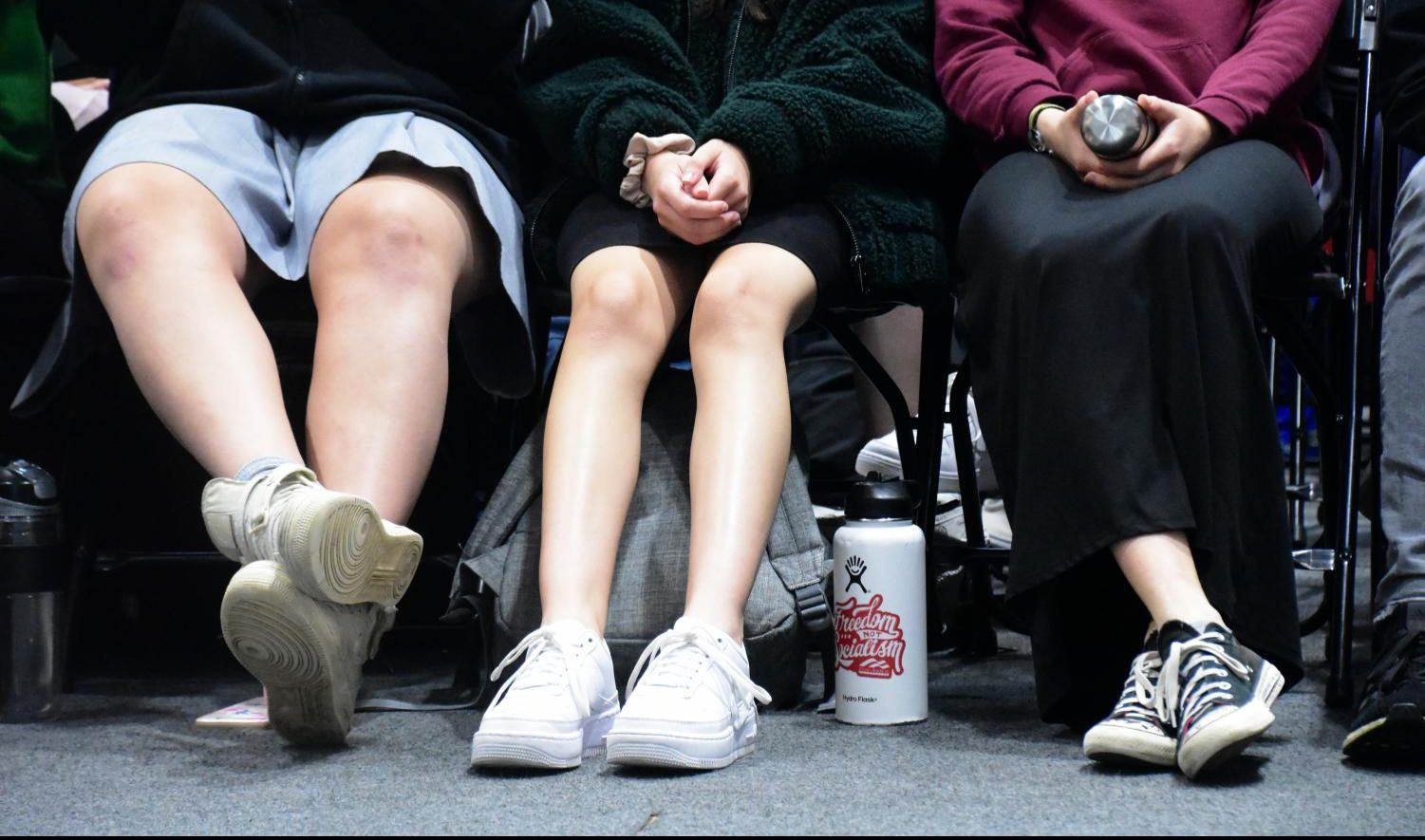 EFFORT: Girls at a recent Town Hall showed the problem with modesty and skirts. They are required at Orthodox schools around the U.S.. (Zoey Botnick)

EFFORT: Girls at a recent Town Hall showed the problem with modesty and skirts. They are required at Orthodox schools around the U.S..

Shalhevet has never had an official uniform, but girls at Shalhevet have a sort of pseudo-uniform, one made up of a pencil skirt and a sweatshirt. It complies with the school dress code and is an easy outfit to put together.

But just because it complies with the dress code does not mean that it is always modest, or tsanua. Some girls believe that because the skirts are short and can ride up, pants would make it easier to be modest.

“I think pants are less revealing than skirts,” said junior Maia Lefferman. “I think that we should be able to wear what we want to wear, and the school should not be able to tell us what we can and can’t wear.”

So why aren’t pants allowed at Shalhevet?  It would seem that if loose, like sweatpants, they may reveal less of a girl’s figure than some skirts do.

But modesty, it turns out, is not all that’s involved.

Shalhevet’s dress code, described very simply in the Student Handbook, has a number of factors behind it, including some that might even seem like they are in contradiction with one another.

The first is Jewish law — halacha. Devarim 22:5 states that a woman should not wear the clothing of a man. In 2019, which gender wears what is not as simple as it might have been in the past, but this factor is still a consideration.

The second is minhag, or custom.  Most Shalhevet faculty cite this as the strongest reason for Shalhevet’s rules — the idea of a “normative culture” of Modern Orthodoxy today, along with a sense of formality to show respect at school.

And finally, there is modesty.  As shown by riding-up pencil skirts, culture and halacha do not automatically promote what is most modest.

“If the whole thing about tzniut is that you don’t want to be too revealing,” she said, “you’re revealing more of your body and leg with a pencil skirt than you are with sweatpants. Sweatpants aren’t made for you to look good in, they’re just meant to be comfortable.”

But she still thinks sweatpants are more modest than a pencil skirt.

“All skirts must reach the knee when standing and must fall vertically over the knee when seated. Skirts should be closed all the way and fit properly (and please, do not roll up the skirt.)”

I think it’s important to include somewhere in this conversation that tzniut is not only about dress. It’s about attitude and comportment.”

It doesn’t mention pants at all — assuming that everyone would know they’re not an option and only describing appropriate skirts, shirts and shoes.

Mashgicha Ruchanit Yoetzet Atara Segal said there are two reasons for the restrictions against pants.  One is their tightness, which can be very revealing. The other is what she called the “societal norm” of Modern Orthodox Judaism.

“We really feel like it being too tight is more of the issue, in terms of tzniut,” or modesty, Yoetzet Segal said in an interview.

This is also stated in the Handbook, which gives a definition for modesty in its dress code.

It says: “Shalhevet’s respect for tzniut in dress is reflected in a dress code that represents Jewish values, which ask us to focus on a person’s spiritual and personal qualities above his or her physical ones.”

The Handbook also says that the dress code  “permits self-expression within parameters of respectfulness toward oneself and others, and prohibits dressing in a way that undermines or distracts from the important work of Jewish and general education in the school” — what Yoetzet Segal referred to as “formality.”

Although not in the handbook, Shalhevet makes exceptions during Color War, Purim, team sports and school trips, including longer bus rides, airplane flight and Shabbatons.  During those activities, girls are permitted to wear loose sweatpants or shorts to the knee.

Faculty announces on Schoology the night before if girls will be allowed to wear sweatpants at school.

Versions of the same policy are in place at Modern Orthodox schools around the country.  The Frisch School of Paramus, N.J., Berman Hebrew Academy of Silver Spring, M.D. and SAR of Riverdale, N.Y. all require female students to wear skirts at school.

“Girls are required to wear a dress or skirt that covers the knee while they are standing,” states the handbook of Frisch. “Slits in skirts cannot be open above the knee. Divided skirts, cutoffs, and slacks are not permitted.”

SAR’s handbook says: “Girls must wear skirts that cover the knees; front slits are not permitted.”

Berman Academy’s handbook is similarly worded, adding that both skirts and dress “must fall below the knee when standing and seated.”

How strictly these rules are enforced is not entirely clear. The Boiling Point did not conduct a wide survey on this issue, but Shalhevet girls  had mixed experiences. Some said they saw skirting intermittently — one said “like all of my friends have been skirted at least five times” — while others saw it less often.

Like Shalhevet, SAR and Berman allow girls to wear sweatpants on trips, according to SAR senior Ranya Braverman Goldstein and Berman senior Avital Fink. But according to Frisch senior Serana Bane, at Frisch pants are allowed only if the girls are on a single-gender long bus ride.

Yoetzet Segal said the active nature of the particular activities makes it more tsanua for girls to be wearing pants. On a plane, for example, people might want to fold up her legs or otherwise move around to stay comfortable.

“Going on a plane is an experience where it makes sense to wear sweatpants,” Yoetzet Segal said. “If you’re doing activities for Color War, it makes sense. It’s part of the societal expectation.

“During class, during certain types of school trips, then skirts make sense because that’s part of what is considered formal and appropriate attire.”

Otherwise, Yoetzet Segal sees no reason for girls not to wear pants as long as they are modest. Pants that meet her definition of modesty are “Aladdin” pants, which are pants that are loose around the leg but tight around the ankle.

“That’s the societal norm so I subscribe to that societal norm,” Yoetzet Segal said. “There’s no other compelling reason not to.”

Outside of school — an arguably less formal place where handbooks are not involved — there is some flexibility within Modern Orthodox custom.  Yoetzet Segal said she herself does not “generally” wear pants, but will if the pants are modest and the activity requires pants.

And when she doesn’t, it’s only because of the “societal expectation of Orthodox women wearing skirts,” she said.

Shalhevet girls have a wide range of opinions on the subject.  Some see it as Yoetzet Segal does, while others do not understand why Shalhevet ever allowed girls to wear pants at all.

It’s a lot more modest to be wearing sweatpants, because it covers more in different kinds of positions.”

Abbi Sentchuk, also a senior, thinks students take advantage of the privilege. She understands why Shalhevet allows girls to wear sweatpants for hiking and bus rides, but still thinks it shouldn’t.

“When Shalhevet allows sweatpants to be worn, people wear leggings and tight sweatpants,” said Abbi. “If you cannot find loose sweatpants, do not wear sweatpants. As a Just Community, I think we can see that this has been taken advantage of and should be taken away.”

Senior Kira Faerstain thinks students should be allowed to wear sweatpants all the time for modesty reasons.

“I believe that loose pants are more modest than a tight skirt regardless of length,” said Kira. “If students were to wear loose fitting pants, they would feel more comfortable and be less worried about getting dress-coded.”

Maia Lefferman said that girls should at least be able to wear pants occasionally at school.

“It’s a lot more modest to be wearing sweatpants, because it covers more in different kinds of positions,” she said.

Though halacha is not the main issue driving Shalhevet’s dress code, modesty is a religious concept that has grounding in Jewish thought and teaching.

“I think it’s important to include somewhere in this conversation that tzniut is not only about dress,” said Yoetzet Segal. “It’s about attitude and comportment.”

The Gemara says that the “shok” is erva. But the meaning of shok is dispute. The Mishna Brurah says it means the thigh — that is, the knee to the top of the leg. The Chazon Ish, a 20th-century leader who lived in B’nai Brak, Israel, said it means the entire leg.

There are two other issues as well. One is Beged ish — the prohibition against men wearing women’s clothing and women wearing men’s.  Some consider all pants male clothing, and therefore prohibited for women.

According to the Minchat Yitzchak — Rabbi Yitzchok Yaakov Weiss, a Halachic and Talmud scholar who was head of the Beit Din in Manchester, England —  pants were clothing intended for males, and are therefore inappropriate for women to wear at all and all pants are Beged ish.

Rav Ovadia Yosef, who served as the Sephardi Chief Rabbi of Israel from 1973 until 1983, disagrees. He says that there’s a difference between pants made for women and men.

On this point there is a division within the Shalhevet faculty. Yoetzet Segal agrees with Rav Ovadia Yosef.

Beged ish, she said, “for sure is an issue, which people feel holds, but I don’t feel it holds.”

“The halachic tradition that I subscribe to doesn’t feel that it still applies,” she said, “because that’s based on societal mores that might have been true in the late 20th century but I think it’s no longer accurate.”

“The issue of wearing pants is a very complicated issue halachically, because it’s not just about tzniut,” Rabbi Lieberman said. “We can’t argue about the fact that pants cover up more, but pants get into the issue of beged ish and beged isha which is a Biblical commandment and exactly what it means.”

The second issue has to do with the split between the legs, and originates in Bavli Pesachim 3a. Women were not allowed to sit on horses because it was considered a sexual position.

According to Avdi-Avodia, a Syrian-born rabbi who immigrated to Israel, pants are clothing of promiscuity because they highlight this split and would thus lead to inappropriate relationships between men and women.

Yoetzet Segal does not believe that this rule applies to Shalhevet.

“If we felt that that was really that problematic then we wouldn’t allow girls to wear sweatpants on trips,” she said. 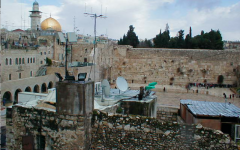 Shavuot in Jerusalem: Anticipation rewarded, then and now 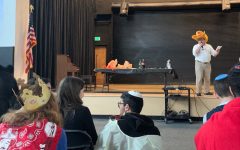 As a teacher, mother and Jew herself, Yoetzet Segal is much more concerned about teaching the spirit of the law.

Rabbi Block agrees and said boys should be penalized at school for the tightness of their pants.

“When guys wear very tight pants or very informal and casual pants, that is a dress code violation that is just as serious as any other,” said Rabbi Block.

But pants are not the only difference in how girls are permitted to dress at Shalhevet compared to boys.

Rabbi Block said this was an issue that needs to be thought about more. 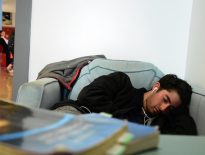 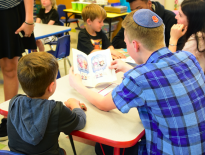