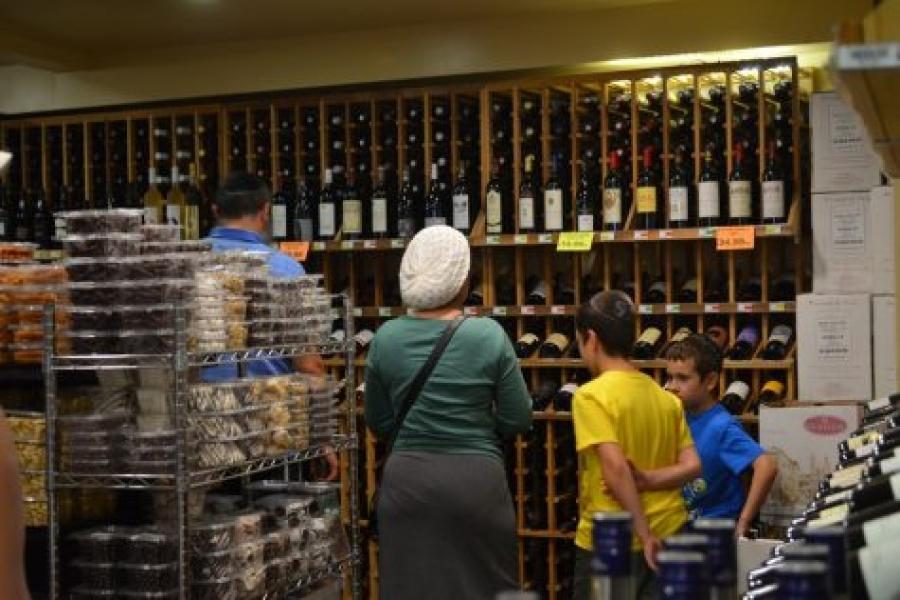 Kiddush clubs: Old tradition is scrutinized in a new way

Popular among adults, opinions vary as to whether they encourage drinking among teenagers

KOSHER: Above, A Jewish family shops for Shabbos wine at The Cask, a wine and liquor store on Pico Boulevard. (Photo by Gaby Benelyahu)

Kiddush clubs are informal gatherings of congregants during or after shul to socialize, eat and drink alchohol.  Some take place during the rabbi’s sermon or Haftorah reading, in between Shacharit and Musaf. Some meet in small rooms at the shuls, while others are at congregants’ homes.

A Jewish tradition of long enough standing to be described on Wikipedia – which says Kiddush clubs are “an informal group of Jewish adults who congregate after Shabbat (Sabbath) prayer services to make kiddush over wine or liquor, and socialize” — they are frequented by members of all three above-mentioned shuls, which together serve a majority of Shalhevet families.

Some congregants enjoy what they consider innocuous social gatherings, while others believe that the clubs promote drinking and send the wrong message to impressionable teenagers.

There’s evidence for both.

His fellow junior Alex Silberstein sees something else.

Adults are similarly divided. After a Simchat Torah night near-tragedy several years ago, community rabbis agreed that something more should be done to discourage youth drinking, and Kiddush clubs were one target.

“One kid almost lost his life from an overdose of alcohol on Simchat Torah night, drinking behind a shul,” said Rabbi Elazar Muskin of Young Israel of Century City (YICC). “So the rabbis got together after Simchat Torah and said enough is enough.”

Each rabbi chose a different approach. B’nai David, for example, banned in-shul drinking on both Simchat Torah and Purim.

“Do we want our kids to see our shuls being a place where, number one, you walk out in the middle of davening [prayer] to drink and to party? “ said Rabbi Muskin. “It’s incongruous to what we believe in.It is a terrible educational lesson for the kids to see this drinking.”

But some say Kiddush clubs can actually foster healthy attitudes toward drinking, and in the long run even prevent problems.

“If Kiddush club is going to be an opportunity to … behave appropriately, then children will see when they’re adults they can do that too,” said Principal Reb Noam Weissman. “I think that’s a fine thing.”

Adult atendees, of course, are over 21 and considered responsible enough to drink appropriately.  They have a higher tolerance for alcohol and are less likely to make decisions with impaired judgement, due to their more mature brains.

At one Beverlywood Kiddush club, 30 to 40 community members – most of them YICC members — gather each week at a different house shortly after shul to make a l’chaim, or toast. Many of the participants, including Shalhevet parent Adam Reich, enjoy the time.

“It is an opportunity after services for everyone to get together to discuss their week, enjoy good banter, good food and the occasional l’chaim,” said Mr. Reich, father of Alex and Ben Reich.

Mr. Reich is confident his children know the difference between teens and adults.

“I believe my children clearly recognize that there is an age at which you can enjoy an alcoholic beverage,” said Mr. Reich.  “And I’ve always tried to teach my kids that it can only be enjoyed once you’re at a certain age – the legal age – and thereafter as long as it is enjoyed responsibly.”

Both supporters and opponents of the clubs see them as primarily social.  They differ on the side effects.

For Mordechai Fishman, a long-standing member of B’nai David Judea, the problem is leaving shul during prayer.

“Kiddush clubs are an abomination before God,” said Mr. Fishman, who is an uncle of freshman Jonathan Fishman. “One should be able to finish praying — and then drink, like a normal Jew.”

“Kiddush after davening is probably the way to go,” said Rabbi Segal. “When teens see their parents ditching the speech and then muttering under their breath as they walk out, and then drinking three to four drinks and then coming back into davening tipsy, I think that’s probably not a good message to their kids.”

But Rabbi Segal does not see a problem with the Kiddush clubs otherwise.

Rabbi Muskin, however, believes that the gatherings promote both under-age and excessive drinking. Several years ago YICC hosted a reformed alcoholic who worked at Beit T’Shuvah, a treatment center, who said that his drinking problem began at shul and other Jewish-related events.

“The speaker said, ‘If you don’t think that kids are watching, you’re wrong.’ And many kids learn how to drink at shuls and it’s just wrong,” said Rabbi Muskin.

Reb Weissman said he believes children do learn from watching their parents, and Kiddush clubs can teach good or bad behavior, depending on the circumstances.

“I am certain of the fact that every single thing that children see their parents do, they absorb,” said Reb Weissman.  “They can often mimic what their parents do… With regards to drinking, I think it’s the exact same thing.

“I actually think if children see their parents drinking alcohol in a healthy way in a certain context in a certain environment and behaving a certain way, the impact they can have on their children is a very positive [one].”

“There’s always concern about people abusing anything or setting the wrong example,” said Mr. Weinreb, father of sophomore Avi Weinreb. “However…it’s important to set the right example for our youth and for everyone about how adults can behave, can have a drink in an appropriate manner with decorum.”

Others say Kiddush clubs are not problematic because the amount of drinking there is small.  Students say they themselves actually drink at Kiddush clubs sometimes.

“Kiddush club is a nice opportunity to hang out with your friends in the backyard of the host’s house,” said Alex Silberstein. “To me, Kiddush club is harmless…Overall, it seems like an innocent thing and I enjoy it.”

“They’re having a little l’chaim with their dad,” said an upperclassman who asked to be anonymous. “It’s almost a ritualistic thing. You get to 17, 18 years old and you reach that age and its kind of symbolic.

“It’s never like the adults are passing kids shots and they’re getting hammered,” he continued. “No one gets drunk –  meaning kids drink, but no one gets drunk.”

“There’s a second kiddush club that’s also behind closed doors, but there’s a window, a big window, and you can see through it,” said junior Nicole Soussana.  “If a kid or teenager passes by they can see what is going on inside there.”

Kiddush clubs are not officially permitted at B’nai David, but members sometimes gather during Haftorah to drink liquor, according to freshman Jonathan Fishman.

“They just go and talk and have a shot — there’s no big get-together,” said Jonathan.

Similarly, Beth Jacob does not have an official Kiddush club, but a group of people sometimes leaves shul early for food and drink.  Beth Jacob Rabbi Kalman Topp said he understood the reason for the practice.

“If a group of people are coming on time and they are davening and listening to krias haTorah for the two hours, that’s an ideal, and I would tell them don’t leave shul for an extended time,” said Rabbi Topp in an interview.

“But if a group needed encouragement to come to shul or the extra time with friends makes the Shabbat experience more exciting, one could argue that it’s not a bad thing.”

He added that it’s not just the what, but the how.

“The drinking of any wine or alcohol needs to be done responsibly, minimally without glorifying it,” said Rabbi Topp. “And it’s certainly very important to do all we can to make the teenagers and children to not get the wrong idea about drinking, and I believe the Kiddush club, which has food and cholent and soda, follows these guidelines.”

For many students, Kiddush clubs have become a part of the regular Shabbat routine.

“It’s Shabbat, that’s what a dad does,” said sophomore Mendy Mentz.  “I would go to shul and it would be totally a part of it.”

When Bennett Schneier moved from Philadelphia to Los Angeles, the Kiddush club became part of his Shabbos too.

“This is what you do to meet people,” said Bennett. “You go to shul and you have a l’chaim after…The conversation is always funny and I like to schmooze with people there and I like to hang out, talk to a couple people, catch up.”

Including alcohol is just how it’s always been, according to Mr. Reich.

“Typically, when you attended a kiddush you’re saying kiddush over wine and there would be some schnapps and some alcohol,” said Mr. Reich.  “I don’t think it’s necessary, [but] I think it’s always been a part of the tradition.”

“Alcohol stimulates fun conversation so I hear it,” said Alex.

“When I was a kid it was not prevalent in shul – it wasn’t in my father’s shul,” said Rabbi Muskin.  “When I was growing up there was an expression, a shikur [drunk] is a goy [non-Jew]. Jews don’t get drunk. That’s changed. Now we drink very expensive liquor.”