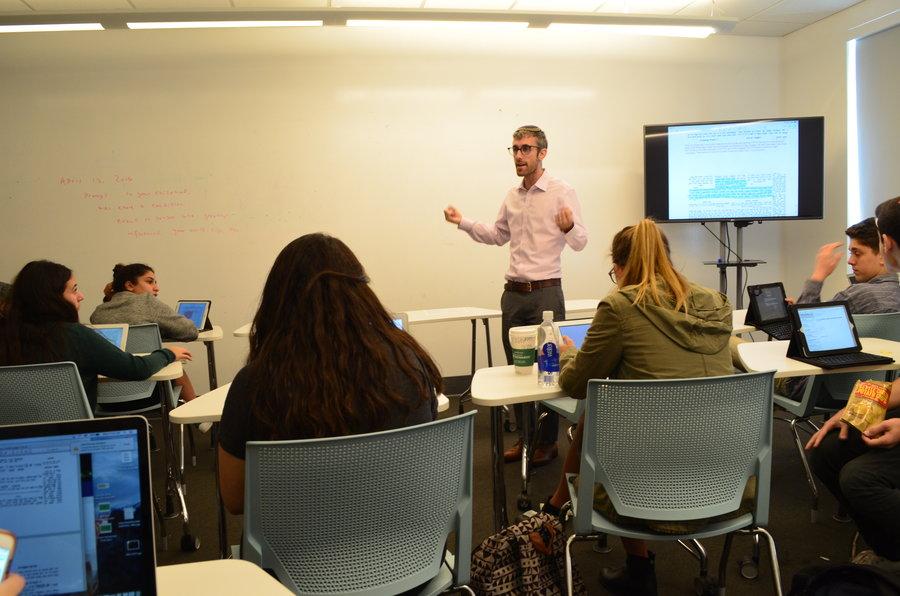 A Shabbat eve mistake by students and staff led to a girl’s saying Kiddush on last fall’s Princeton Model Congress trip, causing the administration to clarify how their highly lauded Lahav Talmud curriculum should be applied to daily halachic life.

As reported in a story reported in print editions of the Boiling Point, senior Micah Gill asked Nicole Newman to recite Kiddush on behalf of the debate team on Friday night, declining the honor himself because the Gemara in Brachot, featured in the Lahav curriculum, states that women may make Kiddush for men, and thus on behalf of the team.

But after learning from the article that Nicole had led kiddush, Principal Reb Noam Weissman – co-creator of Lahav with Judaic studies teacher Rabbi David Stein — clarified that a woman should not have led Kiddush, and that the trip’s faculty chaperones had erred in allowing her to do so.

Reb Weissman said that since it is not “common practice” in the Shalhevet community for women to recite Kiddush on behalf of men, and modern Halachic authorities do not allow it, the school has made an institutional decision not to allow women to lead Kiddush even though the Gemara says it is okay.

“Is that what the Los Angeles community does now? No, and therefore it is not a decision that Shalhevet will make,” said Reb Weissman.

He said that even though some Rabbinic authorities including the Shulchan Aruch and the Ramah explicitly say that women can make kiddush on behalf of men, more must be considered.

And though the Lahav curriculum teaches these sources, Reb Weissman said that they alone are not what determines whether it is allowed.

“Halacha is the law expressed in different situations and circumstances. Halacha is not created in a vacuum. The community practice is part of the halachic system.”

He declined, saying he did not deserve the honor and that fellow senior Nicole Newman should say it instead, because men and women have an equal obligation.

That night, Micah quoted the Lahav curriculum, recalling that in 11th grade he learned the Gemara Brachot 20b, which uses a case to prove that women have an equal obligation to men’s in the mitzvah of Kiddush.

Current 11th grade Talmud teacher Ms. Ilana Wilner teaches that unit this year, and was a chaperone on the Model Congress trip. Although she allowed Nicole to lead Kiddush at the time, Ms. Wilner told the Boiling Point it was a mistake.

“In 11th grade, we learned the idea that once you are obligated in something you can then fulfill the mitzvah for anyone else under that same obligation,” said Ms. Wilner.  “We do end up saying women do not do this, and it was a mistake that we made by allowing Nicki to make Kiddush” on behalf of the entire mixed group.

The other chaperone on the Princeton trip was Director of College Counseling Ms. Aviva Walls. Ms. Walls told the Boiling Point that when it happened, she was thinking about what it would mean for Nicole if she could be empowered and make Kiddush.

“I think it was a really beautiful moment and I got caught up in it,” said Aviva.  “When I got back to school I realized I had made a mistake in letting it happen because we missed one crucial step in this halachic process.  No one in the room had the authority to say to set this precedent.

That night, Micah said he did not deserve the honor of saying Kiddush and he wanted to give Nicole the opportunity. But now Micah, too, believes it was a mistake.

“It was a mistake on my part to not only say that she should be allowed, but to make a ruling, because high school kids are not in a place to make halachic rulings,” said Micah in an interview .

Reb Weissman said the mistake did not mean the curriculum needs to be edited, even though Micah’s belief that Nicole could make Kiddush was based on the source he learned in 11th grade,.

“This does not impact how I think about the curriculum – it impacts how I think the curriculum needs to be taught,” said Reb Weissman. “I think that teachers, and it’s a really hard thing to do, need to be much more explicit about certain things, because our students, rightfully so, will get confused sometimes.”

Shalhevet’s curriculum, called Lahav, has won two grants and is currently being used by other schools.

“Maybe we need to spend more time paying attention to halacha l’maaseh,” said Rabbi Stein. “It’s an area which we’re currently expanding the curriculum into so teachers will have it at their disposal.”

With progressively larger roles for women in Modern Orthodoxy, the question of whether or not women can recite Kiddush for other men is not new.

B’nai David-Judea Rabbi Yosef Kanefsky, who is a leader in finding halachic ways for women to be included in Jewish ritual roles, said two factors should be considered when making halachic decisions.

“One is that people have to determine whether in their particular context, a woman reciting kiddush reflects negatively on the mitzvah,” Rabbi Kanefsky told the Boiling Point. “In other words, whether it would be seen as a diminishment of the honor of the mitzvah because a person of lesser stature is reciting it. That’s one thing to be considered and that can very by context.

“The other is assessing what is considered familiar and expected in a particular context, because one thing you never want to do is to catch people by surprise or startle them with something new when they may not understand the halachic particulars or have really had a chance to think the issue through for themselves.”

Nicole thought making Kiddush would be a way to bring her learning to life and did not realize it was an issue until the subject was brought up in a Town Hall on Feb. 18.

“I thought it was just a nice way to take what we learn it class, use it in the real world and use it in practice,” said Nicole.  “I didn’t realize until the Town Hall that the administration saw that as a problem.”

Though they agreed that students were incorrect in allowing Nicole to say Kiddush, Ilana Wilner and Rabbi Stein were proud that the students were using their knowledge.

“The idea of it was really nice, that students took ownership of their learning,” said Ms. Wilner. “Even though this is from last year and you see students not remembering what they learned last month, let alone a year ago, they were really applying their studies and their knowledge.”

Rabbi Stein thought that the incident was a learning moment and teachers must make sure students understand that Halacha is dynamic and there are other factors that that contribute to Halacha.