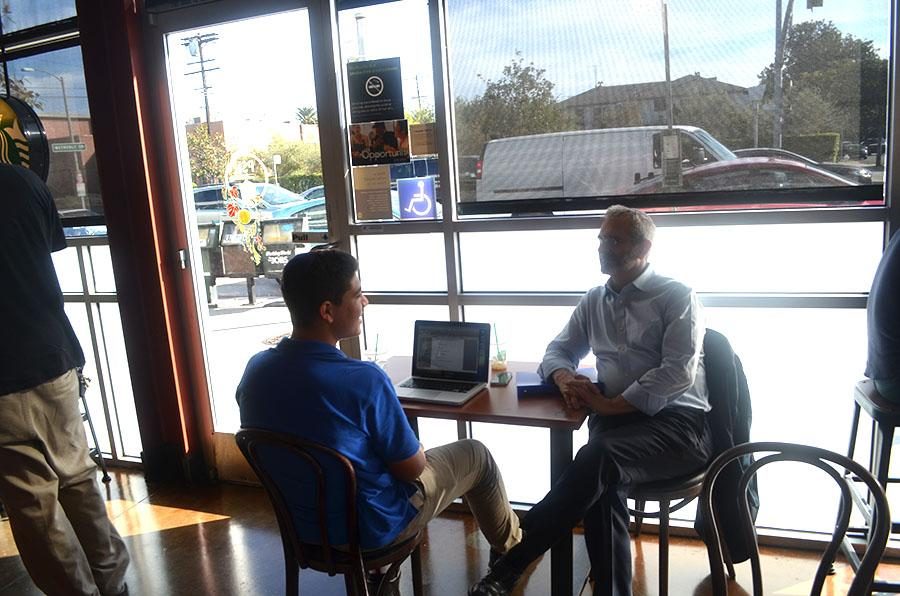 The Rabbi Isaac Elchanan Theological Seminary of Yeshiva University has ordained thousands of rabbis since its founding in 1896. Rabbi Steven Greenberg of Boston is no exception, except for the fact that he is the first openly gay Orthodox rabbi in the world.

Rabbi Greenberg grew up in Columbus, Ohio. He went to Yeshiva University and Yeshivat Har Etzion in Gush Etzion, one of the most well respected in the world, headed until last week by HaRav Aharon Lichteinstein z”l. Rabbi Greenberg now works as a faculty member for the Shalom Hartman Institute of North America. He lives in Boston with his husband Steven Goldstein and their four-year-old daughter, Amalia.

It was at Yeshivat Har Etzion, also known as “Gush,” that Rabbi Greenberg suspected he might be different.

“When I was 20, I was at Gush and I recognized that I was strongly attracted to another student,” said Rabbi Greenberg. “I told the Rav that I am pulled to both men and women. He responded to me, ‘My dear one, you have twice the power of love. Use it carefully.’”

Rabbi Greenberg received smicha (ordination) in 1983. In 1999, he he openly admitted to being gay and came out in an interview in the Israeli newspaper Maariv.

“I was already out to family and friends,” Rabbi Greenberg told the Boiling Point in an interview at Starbucks in Los Angeles last fall. “Then you come out to close family members, than parents, then you come out publicly.

“I was already a rabbi. For me it meant taking responsibility for all the gay kids out there. I could no longer call myself a rabbi if I wasn’t a rabbi for them.”

Rabbi Greenberg’s smicha has not been revoked.  Still, a significant portion of the Orthodox rabbinate is troubled by what he is doing and some have spoken out vehemently against him.   A hundred Orthodox rabbis signed a scathing email letter to him when he first officiated at a gay commitment ceremony in 2011.

Some of the negativity is in reaction to his forays into the media. In 2001, Rabbi Greenberg appeared in a film called Trembling Before God, about the struggles Orthodox Jews experience growing up and concealing a secret.

Then, in 2004, Rabbi Greenberg wrote an award-winning book titled Wrestling with God & Men: Homosexuality in the Jewish Tradition, which won the Koret award which is an award for excellence in Jewish prose.

Rabbi Avi Shafran, spokesman for Agudath Israel of America, responded to the film.

“What Rabbi Greenberg apparently believes is that elements of the Jewish religious tradition are negotiable, that the Torah, like a Hollywood script, can be sent back for a rewrite,” said Rabbi Shafran in a reaction post titled, “Dissembling Before God – The Agudath Israel Response.” “That approach can be called many things, but ‘Orthodox’ is not among them.”

Other attacks have been up close and personal.  Rabbi Greenberg described a time when a religious Jew confronted him in New York City.

“I had just come out two weeks prior,” Rabbi Greenberg said. “I was walking in New York and a man started screaming at me, ‘You public homo, you sicko-disgusting, go back to the bars and clubs where you belong.’

“I experienced these words not in me but flowing by me,” he said. “He was looking at some monster that didn’t exist. I didn’t need to be defensive or fearful or hurt or angry — I need to help him see better.”

He replied more forcefully than usual, he said.

“I responded, ‘I am afraid that I will be your worst nightmare. While I don’t go to clubs, I go to shul, a lot. I have lots of gay friends and we will push our baby carriages into your shul and we will not leave.”

There has been much progress in attitudes toward homosexuality in the intervening years.  But Rabbi Greenberg said it can still be quite a struggle, and teens who think they may be gay should be prepared.

“There is no way all environments will be safe, so learn to be resilient,” Rabbi Greenberg said,  “and what that means is that when people say homophobic remarks to you, they are speaking to monsters in their head. You are not the monstrous person.”

And he had this advice for students who might be gay at Shalhevet.

“The most important thing to know is that God loves you and the Jewish community is getting better,” said Rabbi Greenberg. “You will have a great life, relax, get through high school and things will be alright, don’t be too frightened by the future. I promise you that there will be Orthodox communities proud to have you as members.”