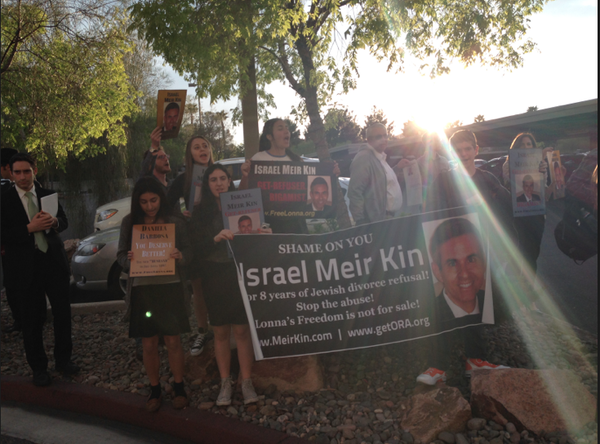 SUNSET: As the light faded in Las Vegas March 20, Shalhevet students joined others in protesting the remarriage of Israel Meir Kin, who is still halachically married to Lonna Kin. (BP Photo by Avivah Paskowitz)

SUNSET: As the light faded in Las Vegas March 20, Shalhevet students joined others in protesting the remarriage of Israel Meir Kin, who is still halachically married to Lonna Kin.

It was a Thursday afternoon, and six Shalhevet students traveled to Las Vegas to protest a Jewish wedding.

Israel Meir Kin of Las Vegas was getting married, for a second time. But this time, he was still halachically married to his first wife, Lonna Kin, having refused to give her a get – the divorce document that, under Jewish law, can only be given by a husband to a wife and not vice versa.

Mr. Kin signed a conditional get  and left it with rabbis in Monsey, New York, but he has not given it to Lonna. That makes her an agunah, someone who may not remarry in spite of having a civil divorce.

The March 20 protest hoped to convince Mr. Kin to change his mind and give her the get.

Set for 6 pm – towards the end of the wedding – the protest was held on a Thursday afternoon at the Lakeside Event Center in Las Vegas’ Desert Shores neighborhood.

Shalhevet’s group, led by Head of School Rabbi Ari Segal and Student Activities Advisor Raizie Weissman, didn’t get back until 12:30 am Friday morning.

Two days before, Rabbi Segal had sent out an email asking if anyone would be interested in accompanying him on the 14-hour trip — seven hours each way. Afterward, he said the distance itself was an important reason to go.

“Our tradition has a notion of s’char halicha – that we receive a reward for the distance we travel for a mitzvah,” Rabbi Segal wrote in an e-mail to The Boiling Point.

“While I don’t know precisely how this works,” he continued, “I do know that the entire trip — not only the rally itself but the car ride back and forth — was part of a profound educational experience for those who attended.”

Within the first 20 minutes of the protest, Las Vegas police officers came and asked all the protesters to leave the front of the Lakeside Event Center. The wedding was happening inside.

The protesters regrouped on the sidewalk.  Mr. Kin was spotted for a few moments.

“Israel saw us and knew that we were there,” said sophomore Shirin Nataneli.  “He and his fiancée were walking around with security.”

Protesters were shouting many things, including “Kin family, shame on you,” and “Israel Meir Kin, stop the abuse” – referring to their belief that refusing to give your wife a get is a form of domestic abuse.

In various unsigned website articles, including one titled “The Phony Agunah,” anonymous authors claim that Mr. Kin has deposited a get with a controversial Beit Din and that Ms. Kin has just refused to accept it.

But other reports explain that Ms. Kin may only have that get if she agrees to binding arbitration by a particular Beit Din (Jewish court), one that is not considered legitimate by respected Orthodox organizations such as the Rabbinical Council of California (RCC).

Rabbi Segal knew about this and said a get must be given without conditions.

Yaakov Sobel and Shirin Netaneli contributed to this story.

Related: Root of agunah problem is that seventh commandment has different meanings for women, men