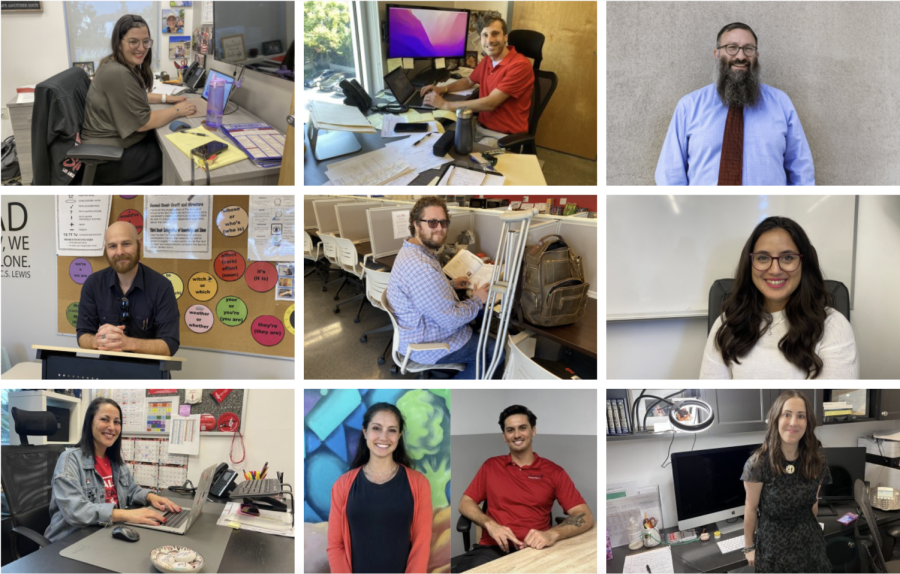 COMPLETE: The Boiling Point has profiled all 18 of this year’s new teaching and administrative staff, some of whom are pictured above. Stories are linked at the bottom of this page.

18 new faces bring range of backgrounds to faculty and staff

Scroll down and click on a picture to read about each of this year's new faces.

Eighteen new staff members have joined Shalhevet this year as 10 departed, making it almost certainly the biggest single year of staff turnover in the school’s history.

Four departments grew – Judaic Studies, English, History and P.E., along with administration – and one department, Art and Performing arts, shrank. A few additions filled positions that had been vacant for one or more years.

Seven of the new staffers are teaching one class each.

Head of School Rabbi David Block called it a sign of progress and strength for the school.

“At a time in which schools throughout the country are in dire need of educators, in which the Great Resignation is ravaging day schools and leaving many positions vacant (as we experienced last year), 18 phenomenal educators and administrators chose to join the Shalhevet family,” Rabbi Block wrote in an email response to Boiling Point questions.

He said the phrase “teacher turnover,” which The Boiling Point is calling its coverage of all 28 staff changes, implies a mindset of replacement that didn’t tell the whole story.

New classes were also introduced this year, including Honors Art History for upperclassmen, and Will Power: An Introduction to Shakespeare, for juniors.”

“While some hires are to fill previously held positions, many are not replacement hires (which is where our minds often go when we hear of new faculty),” Rabbi Block wrote. “We’re actually investing in creating more sections in order to decrease class sizes – to strengthen the impact of students’ educational experience and their connection with faculty.”

In the Arts department, Ms. Samantha Garelick is now teaching all courses – including a new SAS Art History course – and former art teacher Meirav Finn is working as a substitute in various departments.

Calculating exact numbers this year is difficult, because there were departures during the school year last year. Also, some teachers have increased or decreased their number of classes.

The History Department added two – Ms. Sarah Nissel, teaching Honors Law, Religion and the American Jewish Community, and Mr. Nicholas Simmons, who is mostly a math teacher but who also teaches SAS Economics. Also, Mr. David Barishman is now teaching more courses than before, and Mr. William Reusch is teaching fewer, having cut back to part-time to pursue other kinds of teaching opportunities.

Judaic Studies added three and lost one. Rabbi Broner, Mrs. Popper and Ms. Tovah Goldman, all of whom have non-teaching responsibilities as well, are teaching one or two classes each. Meanwhile Ms. Natalie Honig left to work at Maimonides.

“While some hires are to fill previously held positions, many are not replacement hires (which is where our minds often go when we hear of new faculty).”

In administration, Ms. Maya Cohen, new Director of Admissions, has replaced Ms. Natalie Weiss, who left at the end of the 2019-20 school year, and Ms. Molly Jalali holds a newly created position as Admissions and Development Associate.

New classes were also introduced this year, including Honors Art History for upperclassmen, taught by Ms. Samantha Garelick; and Will Power: An Introduction to Shakespeare, for juniors, two sections taught by Mr. Brian Forrester.

Roll cursor over a picture to see the headline, and click to read the story.

Ms. Malka Popper, most recently principal of the Upper School at Berman Hebrew Academy in Rockville, Md., has taken the newly created role of Shalhevet’s Chief Academic Officer and becomes the highest-ranking female academic administrator currently at Shalhevet. She said her new position entails working to better implement Shalhevet’s mission. She was at Berman from 2019 to 2022. “I ge... 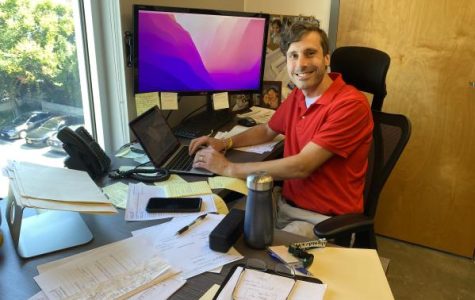 Though he thinks the college application process is like a separate, “really challenging” course for seniors amidst their other responsibilities, Mr. Jordan Moss, new Director of College Counseling and Academic Advising, hopes to make the process less stressful and more manageable for Shalhevet seniors. And in fact, he has made it a course, for both seniors and juniors. Seniors usually meet du... 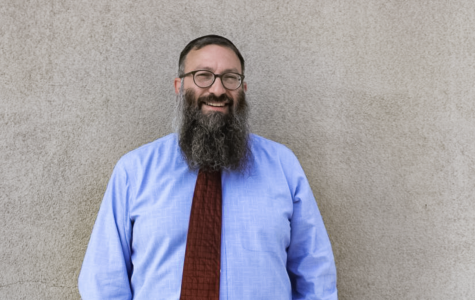 Shalhevet’s newest rabbi, Rabbi Eli Broner, occupies the newly created position of Dean of Ninth Grade and looks to inspire students by making Judaism meaningful and “cool.”  Rabbi Broner is also teaching ninth-grade Tanakh, ninth-grade advisory and 12th-grade Advanced Talmud. Before arriving at Shalhevet, he taught for 10 years at Harkham Hillel Hebrew Academy, many of whose graduates have m... 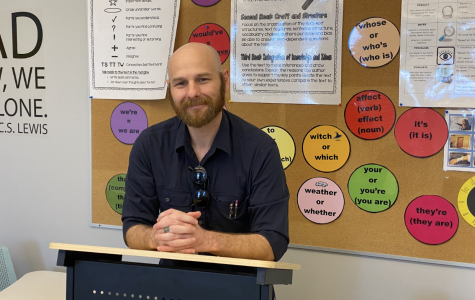 Aspiring writer and avid comic book fan Mr. Dylan Ross has joined Shalhevet’s faculty, teaching both the 9th-grade English Composition class and the 12th-grade Film Literature class. This is his eighth year teaching. He has lived in Los Angeles most of his life, and most recently taught at Bright Star Charter School, which is located on the same campus as Los Angeles Southwest College. Outs... 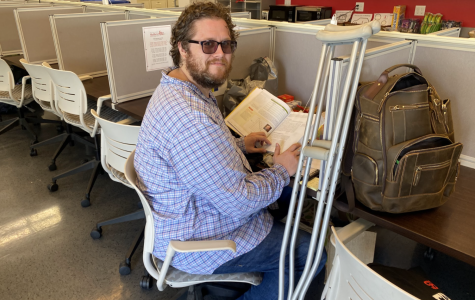 Mr. Nick Simmons, who is now teaching three math courses and Economics at Shalhevet, said he came into teaching by accident. As part of his graduate program at the University of Tennessee, he taught a class in economics and loved it. Once he returned to Los Angeles, where he was born and raised, an opportunity arose for him to teach full-time. “There was a friend at another school, there we... 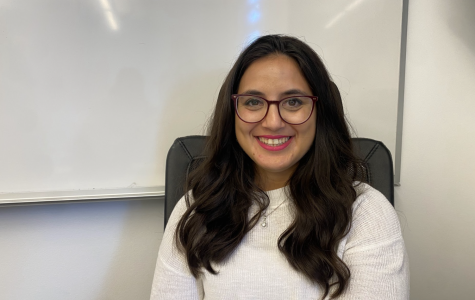 This year Ms.Tovah Goldman, a Los Angeles native and former nursery and Pre-1 teacher, has joined the Shalhevet staff as an 11th-grade Tanach teacher and 11th-grade Mashgicha Ruchanit. Ms. Goldman was born and raised in Los Angeles, where she attended Yavneh Hebrew Academy and Bais Yaakov High school. Afterwards, she attended college at Santa Monica College, and after that Ms. Goldman taught nursery... 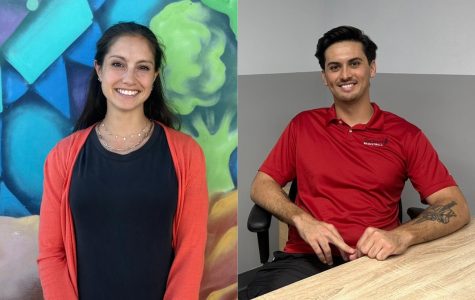 Mr. Adam Plax and Ms. Atara Joel, the new P.E teachers, will try to get students to use the lessons they learn in sports or P.E. and apply them to everyday life. But first, they’re changing the P.E. curriculum. Instead of running in circles around the gym and working on calisthenics as in pre-Covid years, the new teachers are teaching yoga, Zumba and Pilates, upper and lower body and core streng... 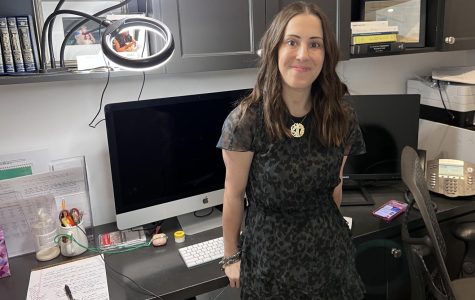 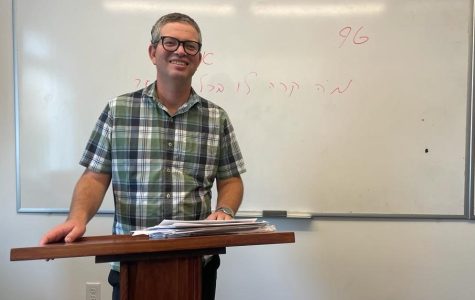 With a niche interest in learning history through cinema, new Hebrew teacher Dr. Sariel Birnbaum hopes to bring more creativity and collaboration to his Hebrew department classes this year. Dr. Birnbaum is teaching 10th-grade Hebrew 101 and SAS Hebrew Film and Literature at Shalhevet, and also teaches both Hebrew and Introduction to Judaism at UCLA. Movies, he said, offer a different way to understan...

Ms. Anna Prager, who grew up as the only Jew in her town and developed a passion for Judaism, Israel advocacy and teaching, plans to bring an individually focused style of teaching to her class at Shalhevet.  Ms. Prager is teaching SAS Jewish Literature, which this year will use Jewish authors' works – fiction & non-fiction – to explore Jewish women’s identity.   She was born, raised ... 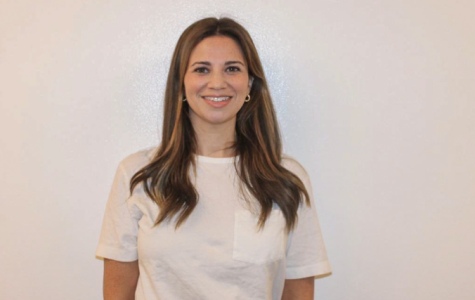 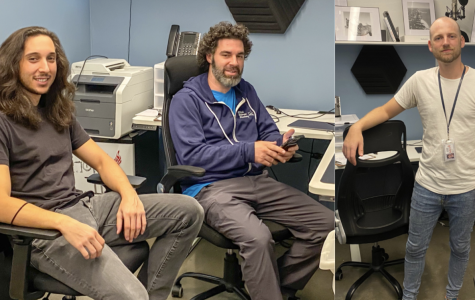 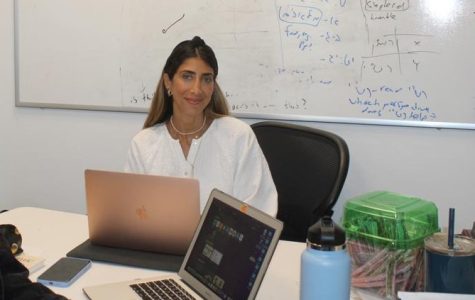 Ms. Natalie Ravanshenas has been given the new title of 10th Grade Eim Bayit, which is Hebrew for “house mother.” The phrase indicates that she is the “mother” of 10th Grade, and there for students to go to when they need to talk, have a problem, or just to enjoy each other’s company.  And like the mother in any house, Ms. Ravanshenas wants everyone in the family to feel comfortable, and ... 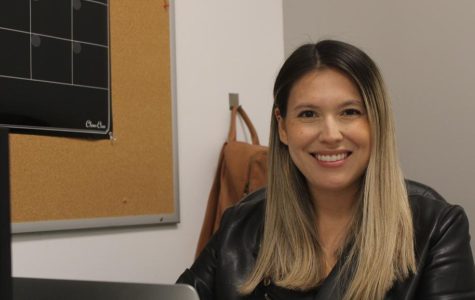 Shalhevet’s new educational support specialist, Ms. Connie Torres, is also a yoga and positive psychology coach who loves to create connections, relate to and solidify trust with her students.  Ms. Torres tutors General Studies classes and supports students who are enrolled in online classes due to learning differences and emotional needs.  “My philosophy is to let them know I am in a sa... 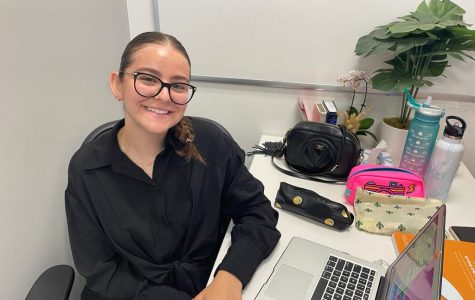 This year Mika Shalom, sister of Shalhevet senior Oz Shalom, has joined the Shalhevet staff to assist the student life team and Ed Support to assist students with Judaic Studies. Ms. Shalom grew up in Los Angeles and attended Kabbalah Children’s Academy for several years. She then moved on to attend YULA Girls High School, and after graduating she spent a year at B’not Torah - Sharfman’s wome... 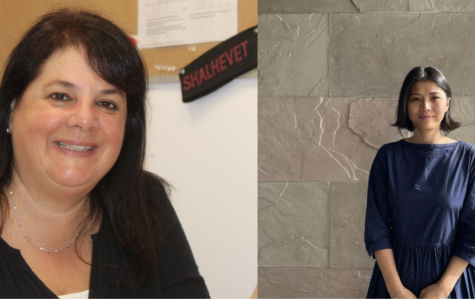 New assistants come from far and (very) near

Saying she looks forward to learning more about Judaism, Ms. Rachel Lin has joined the Shalhevet staff as a Communications and Operations Associate, replacing Ms. Ariel Light who moved to Israel over the summer.  Born in Taiwan, Ms. Linn moved to Los Angeles when she was five years old and at Shalhevet will be working on projects such as the Glouberman Basketball Tournament scheduled for Nov. 2...

Ms. Cheryl Wolf, who built connections with students as the Development Director and Director of Institutional Advancement for the last five years, has not returned to Shalhevet for 2022-23. Institutional advancement and development involve fundraising for the school. She has been replaced by Ms. Sanaz Sazegar, who previously worked at Aish Los Angeles, the Los Angeles Chamber of Commerce and ...