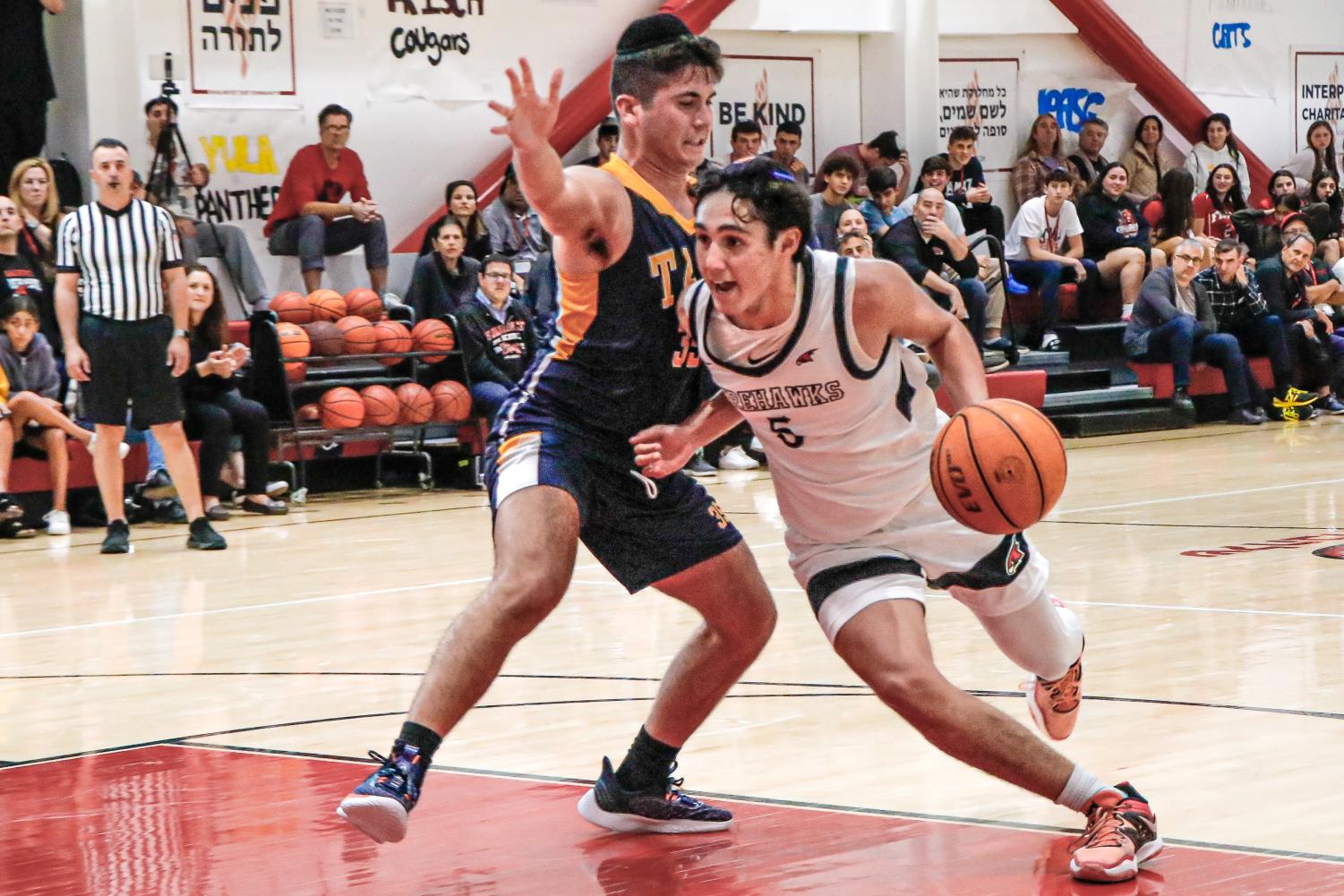 DRIVE: No. 6 Nathan Sellam heads to the basket in Wednesday’s opening victory over TABC.. Nathan was the game’s second-highest scorer with 18 points. (BP Photo by Evan Beller)

DRIVE: No. 6 Nathan Sellam heads to the basket in Wednesday’s opening victory over TABC.. Nathan was the game’s second-highest scorer with 18 points.

Standing room only as home team, YULA and Valley Torah all send large fan crowds to the gym

Hundreds of Shalhevet students, faculty, and opposing teams’ fans lined the bleachers to cheer on the Firehawk girls and boys teams for the first two games of this year’s Glouberman tournament, which began yesterday afternoon at 2:30 p.m.

Shalhevet teams, wearing for the first time this season their new white jerseys, defeated both of their opponents, the girls winning 63 – 19 against Ramaz of New York City and the boys 58 – 35 against TABC of Teaneck, N.J.

The games mark the eighth year of the annual Steve Glouberman Basketball Tournament, which will go until Saturday night, Nov. 5, when the winners of boys and girls semifinals are set to face off in the Shalhevet gym. The girls championship game is planned to start at 9:30 p.m. and the boys is planned for 11:30 p.m.

Eighteen teams are competing in the tournament, which commemorates Steve Glouberman, z”l, parent of three Shalhevet graduates and who himself played basketball for YULA Boys.  This year there are 10 boys teams and eight girls teams, with 233 student athletes from Modern Orthodox Jewish schools across the country.  The Flatbush Falcons of Brooklyn, N.Y., and the Lions of Northwest Yeshiva High School in Seattle are not competing this year.

Shalhevet Coach Ryan Coleman, who coaches both Firehawk teams, said he hoped the girls team would stay injury-free this year – unlike last year, when the team nonetheless made it all the way to the state CIF championship game in Sacramento.

“The girls are very talented and we returned almost all of our players from a team that had a ton of success last year, so very high expectations for the girls this season,” said Coach Coleman in an interview after both games. He coaches both the girls and boys varsity teams.

“We were whittled by injury last year and if we stay healthy, I think the girls, the sky’s the limit for them.”

But he also said they need to work on their defense.

“The girls’ offense is great,” Coach Coleman said. “It’s all about their defense. If they played defense and get rebounds and were able to fast break, we’d play at a pace that most girls’ teams won’t be able to keep up with.”

He said the Firehawk boys did not play their best yesterday and need to improve the most on their defense.

“We haven’t played a lot of basketball, like real basketball – that’s the first time we really played in a long time, so we’ll get better,” Coach Coleman said. “We played well enough to win.

“They’re also very talented and have some injury issues that we’re dealing with right now and guys that are trying to play through it,” he added. “I expect by the end of the week then, that we’ll look a lot better than we did today.”

Coach Scott Ferguson, Ramaz’s girls and boys varsity basketball coach, said his girls team has to get more comfortable at Shalhevet when playing the game, but that his team also had some obstacles to overcome tonight.

“Shalhevet’s a very, very good team,” Coach Ferguson said after the game. “Ryan does a great job with the ladies. But it was tough for us getting up at 3 a.m. this morning and getting to the airport, coming across the country. 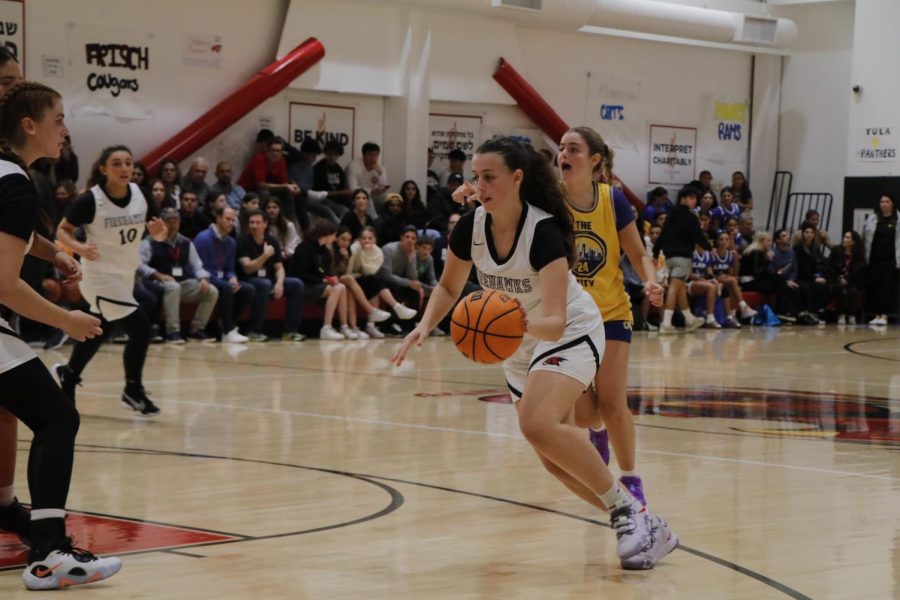 Gallery|11 Photos
BP Photo by Evan Beller
SUCCESS: Firehawk junior Arielle Grossman dribbles toward the basket on the first day of the 2022 Glouberman Basketball Tournament in the Shalhevet gym. Arielle was the high scorer in that game with 17 points.

“And then also we were also missing one of our starters, so it was tough,” he added. “You know,  it was a lot to overcome. But I’m very happy with the girls’ performance.”

He said he expected that issue to pass.

“So I think we need to settle down, be comfortable uncomfortable,” Coach Ferguson said. “Don’t let the moment be too big for you, just stay calm, stay relaxed, and just you know let the game happen, don’t try to force things, and we’ll be okay.”

He also said it was a good start for the many members of his team who are just getting started.

“We have a very young team, so a lot of the girls it was their first varsity game, so I was happy for them to get on the floor,” said Coach Ferguson. “ Some of ‘em even scored a couple times. So it was good, so from that aspect now they understand and they can see what the varsity game is and they can just build that in going forward.”

TABC Coach Oswald Cross also said that his team has to work the most on “sleep” to win.

“No excuses, but it definitely is a tough game and to get off of the plane and play this, in this atmosphere,” said Coach Cross after the game, who is the head coach for TABC’s varsity and junior varsity teams. “We’ll be fine, we’ll bounce back tomorrow.”

Coach Coleman said his favorite moment in the boys game was at the beginning of the second half.

“We changed our defense and put a press on and I think that really gave the other team a lot of trouble,” he said.

Coach Coleman also said the moment he thought was the best in the girls game was when junior Arielle Grossman made a comeback.

“Arielle is our best shooter, and she did not shoot the ball well at all,” Coach Coleman said. “She finally made a layup to get started, and then made back-to-back three’s at the end of the first half, which really opened up the game.”

No excuses, but it definitely is a tough game and to get off of the plane and play this, in this atmosphere. We’ll be fine, we’ll bounce back tomorrow.”

High scorers were Arielle Grossman with 17 points, for the girls game, and team captain Avi Halpert with 20 points for the boys.

Shalhevet led at the end of every quarter in both games. The boys never trailed TABC at all.

Both games were opened by the Shalhevet Choirhawks, wearing black and red, singing the national anthems.

Shalhevet also held its annual pre-tournament pep rally on the roof, which included a dunk contest, confetti blasts, new chants and a barbeque. Firehawk basketball head coach Ryan Coleman taught everyone the chant, “I believe that we will win,” gaining in strength and energy as words are repeated to culminate in the final chanting of the phrase.

And immediately after the buzzer was sounded marking Shalhevet’s first win with the boys, Shalhevet boys hastily ran from the south-end of the bleachers into the boys bathroom to mosh, a familiar scene at Shalhevet with exciting moments like this.

After both Shalhevet games ended, other games followed both at Shalhevet and at the gymnasiums at Pan Pacific Park.