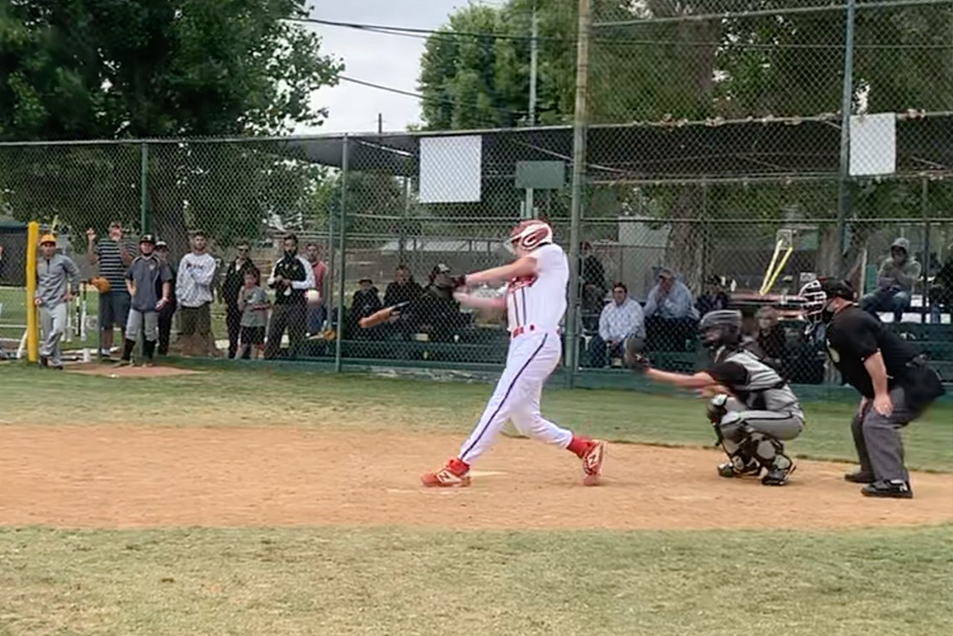 SWING: Above, Josh Harrison hits a game-ending single to left centerfield at the bottom of the seventh inning at East Valley Baseball Fields last Sunday (BP Photo by Jacob Hoenig)

SWING: Above, Josh Harrison hits a game-ending single to left centerfield at the bottom of the seventh inning at East Valley Baseball Fields last Sunday

It was around 2 p.m. at the bottom of the seventh, and the Shalhevet Firehawk baseball team was down 5-4 against the YULA Panthers at the East Valley Baseball Fields in North Hollywood May 16.

Since it was a seven-inning game and Shalhevet was the home team, that meant it was also the Firehawks’ last chance to win without going into extra innings.  For both teams, the holiday of Shavuot was coming up at sunset.

Firehawk sophomore Daniel Harrison singled to center, followed up by another single by junior Andrew Petlak. Freshman Jamie Victor struck out, but during that at-bat Daniel stole third.

Freshman Jacob Kilberg then singled to left, which scored Daniel and sent Andrew to third. The score was now 5-5.

Sam Rubin, a senior and captain of the team, was then walked by YULA’s second pitcher of the game, Moshe Feldman. Bases were loaded, with only one out.

Next up was senior Josh Harrison, Daniel’s brother, who plays first base. Josh came through with a bases-loaded walk-off single to center field — ending the game and securing a Firehawk victory, 6-5.

“Heading up to the plate I was beyond nervous,” said Josh in an interview after the game. “I’ve never been in a situation like this before, and since it was against our rivals I had this extra nerve on me, and this extra pressure that I need to hit the ball.”

Seeing my teammates run at me after I got the hit was one of the greatest feelings I’ve ever felt while playing baseball.”

“And then the moment I made contact with the ball and I saw it fly into the outfield, I knew that that was the game-ending hit and I did it, I didn’t mess up.” he said.

“I was just filled with joy, and seeing my teammates run at me after I got the hit was one of the greatest feelings I’ve ever felt while playing baseball.”

The annual rivalry game — which due to the pandemic was the two schools’ first baseball matchup since 2019 — lasted two hours and 11 minutes. Spectators included 25 people in the Shalhevet section, some of them students, and 30 people in the YULA section.

Until that point, the game’s momentum had gone back and forth between Shalhevet and YULA, though the Firehawks led most of the way.

YULA scored one run in the first inning off a wild pitch from the Firehawk starting pitcher Jack Metzger. But Jack had a great showing throughout the game, starting in that same inning, when he struck out two YULA batters. Jack ended the game with six strikeouts pitching five innings.

“I had my fastball working, and my fastball is my best pitch, so when I get it working it’s very hard for the other team to hit,” said Jack later. “And also from my last start, I changed something up — how I look at every pitch — and I made sure to be confident with every time I throw the pitch and not like just let it rip.”

I had my fastball working, and my fastball is my best pitch, so when I get it working it’s very hard for the other team to hit.”

In the bottom of that first inning, Jacob Kilberg reached second base when YULA’s second baseman and right fielder collided with one another while attempting to catch his hit. This put the game on hold for approximately 10 minutes while the injured boys were checked out by coaches and fellow players. The Panther second baseman, Noam Goldberg, reentered the game, but right fielder Adam Kirschenbaum did not return.

Sam Rubin then reached second as well, when YULA’s right fielder dropped the ball, putting Shalhevet players at second and third base.

Jack Metzger flied out to right, which scored Kilberg, tying the game after the first inning.

The top of the second was quick with Jack retiring two YULA batters with strikeouts and Andrew Petlak catching an out at second base. The bottom of the second also saw three straight outs from the Firehawks.

At the top of the third, sophomore Noah Elad, who was playing shortstop, caught a ground-out which he threw to first. Jack then struck out two more batters to end the bottom top of the inning.

In the bottom of the third the Firehawks expanded their lead, beginning with a double to center by Jamie Victor, his first hit this season and as a Firehawk. Jamie stole third, then scored on a ground out by Sam Rubin.

In the fourth, Jack walked A.J. Tabak who later scored on a ground out, tying the game again.

Shalhevet took a two-run lead during the bottom of the fourth, with three hits starting with Noah Elad, who singled to deep left center. Avi Litvak then doubled down the third base line, sending Noah to third base. Daniel Harrison then hit a double to center field, scoring Noah and Avi.

That brought the score to 4-2, Firehawks lead.

The fifth inning was scoreless but the Firehawks had two strong defensive plays. Jamie Victor made a sliding catch in left field to take a base hit away from YULA, and right-fielder Jacob Kilberg threw a double play to third-baseman Daniel Harrison, who threw to Noah Elad at second to end the inning.

YULA made a comeback at the top of the sixth beginning with a single into left. Panther first baseman Andrew Rubel then singled as well. Jack walked the next batter to load the bases. Moshe Feldman then singled to center, scoring one and shrinking Shalhevet’s lead to one run, with bases still loaded for YULA and no outs.

Andrew Petlak then relieved Jack as pitcher to face the bases-loaded YULA team; the Firehawks only have nine uninjured players on their team, so Jack moved to second base.

YULA’s Avi Etshalom grounded out to second base which scored one run, tying the game 4-4. Another ground-out put YULA ahead 5-4 for the first time during the game, after which YULA stranded a runner at third base on a ground-out to Noah Elad at shortstop.

No scoring occurred during the bottom of the sixth or the top of the seventh. Each team retired three of the opposing team’s batters.

But Shalhevet came back to win in the bottom of the seventh, when Josh Harrison hit a hard line drive to left center that resulted in the Firehawks running out to the field to celebrate the victory.

“We put our best foot forward,” said Andrew. “This is something we have marked on our calendars for a long time, our cross-town rivals. Obviously the result isn’t what we wanted but I’m glad we got out there, had some fun and got to play them. It was a good game.”