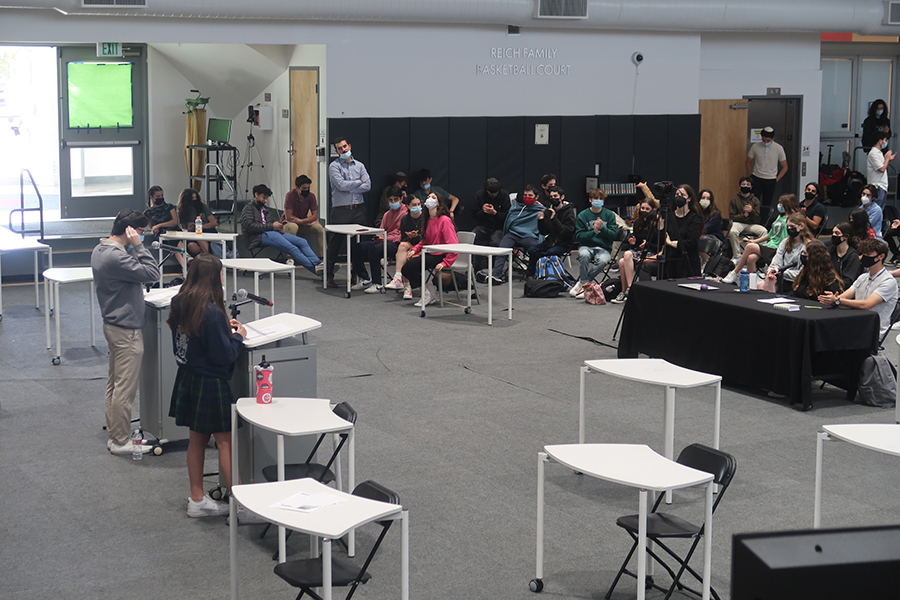 UNMASKED: Agenda Chair candidates were allowed to remove their masks during the debate. They were separated by the moderator and audience by about 20 feet. (BP Photo by Eli Weiss)

UNMASKED: Agenda Chair candidates were allowed to remove their masks during the debate. They were separated by the moderator and audience by about 20 feet.

Standing behind podiums about 20 feet away from the first row of the audience, the pair answered questions about how they would run the Agenda Committee and Town Halls, and what the role is of Agenda within the Just Community.

“I will be a good moderator between the multiple sides of every issue,” she said. “I will be a great chair because I will moderate between both sides, I will listen to both sides, and I will make sure that Town Hall is a place that every single person goes to enjoy.”

Jack, who served as Agenda vice-chair this year and secretary the year before, emphasized his love of Town Hall and his experience in helping plan it.

“Last year, I worked with our former chair David Edwards as secretary, where I learned and familiarized myself with the constitution, our values, and what it means to be on Agenda,” Jack said.

“This year, I worked very closely with Kate as vice chair, learning how Town Halls are made, from the seed of the idea, to what music is being played while everyone is sitting down. I even got the privilege of leading two Town Halls. I believe my time on Agenda as well as my love for Town Hall will make me the best fit for Agenda Chair.”

Molly Litvak, outgoing editor-in-chief of the Boiling Point, moderated the event, which was held during a special 11:35 a.m. assembly.

Chairs were mostly distanced from one another and only three grades were on campus. Seniors and some others watched from home on Zoom.

Aside from candidates’ qualifications, the debate focused primarily on the question of how Agenda should operate as a major part of the Just Community, while still keeping in line with the constitution, being respectful of the administration’s decisions, and standing up for the student body.

Jack described the Agenda Committees’ responsibility to interpret the constitution and make sure proposals uphold rules.

But he also said talking about the Just Community and the constitution too much can get monotonous, and believes that Agenda can provide a remedy.

Although politics may sometimes seem pretty foreign — it may seem that it’s happening to the world and not to us specifically — I think that politics and current events do affect us and our lives. So there should be a combination of both.”

“So in reality, it’s gonna be a balance. There has to be a very fine balance between how much should the Just Community get pushed outwards and how much it stays internally within Agenda. I think the solution to this is going to be a case where everyone feels safe to the point where they can talk about the constitution, talk about the Just Community, bring up proposals, comment on Town Hall, anything like that, but it won’t be in their face should they not care about or shouldn’t have too much of an opinion on it.”

Adina agreed and added that the Agenda Chair should make it possible for people to air their views on different kinds of subjects.

“Although politics may sometimes seem pretty foreign — it may seem that it’s happening to the world and not to us specifically — I think that politics and current events do affect us and our lives, so there should be a combination of both,” said Adina. “We should be discussing the issues that affect us personally, as a community, and the chair should give us that forum, but at the same time we should be discussing issues in the world that affect all of us in a less personal sense.”

The candidates were then asked what they would do if the administration made decisions without consulting the Just Community and Town Hall.

Adina said it would depend on the issue. With issues that affect students long term, like dress code, she said she would push back against the administration, she said, but not on more frequent changes to student life, like special schedules.

“I think that as chair it’s my job to fight for the student body when we’re affected in very large ways, by school policy that change the way that we act, change the way that we dress, etc.,” Adina said, “but when the only school policy being passed is changing what time we start English class, I don’t know if that’s necessarily something that the chair needs to get involved in.”

Jack agreed and said that not pushing back things like special schedules is actually a part of Agenda’s role in representing students, because no one wants to vote on special schedules each week. He said the job is to always stand up for and represent students, particularly in major decisions.

Dean of Students Rabbi Ari Schwarzberg, who is also Just Community faculty adviser, then pointed out that the Agenda Committee represents the Shalhevet community as a whole, not just students.

“Jack, you said that as Agenda chair you would be a representative of the students…,” Rabbi Schwarzberg said. “I think that job is supposed to represent the whole school community, which includes students of course, and the faculty and admin. So I was wondering if you had any comments about that. I think there’s a big difference when you just have to represent the students or when you’re thinking about the larger institution.”

Jack replied that because Agenda represents students, faculty, and administration, the chair ultimately represents what the school stands for, with students being a large part of it.

“If I were to be Agenda chair, all of Agenda quite frankly represents a lot of what the school stands for,” Jack said. “That doesn’t only mean students, but students are a big part of it, and on a grander scale, the students are what makes up a lot of Shalhevet.”

But he also doesn’t believe that there’s that great a difference between the interests of the students and faculty.

“I think — to answer your question — [the idea] that there’s even a difference between faculty and students in terms of interest I think is misleading,” said Jack. “I think we ultimately have a lot of the same interests, and standing up for the students also means standing up for the teachers.”

Only Agenda candidates debated, but in all, 27 students are running for eight Just Community offices. Candidates for other offices made campaign videos, which will be shown this morning at 10:30, followed immediately by the election itself. 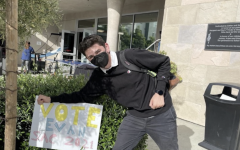