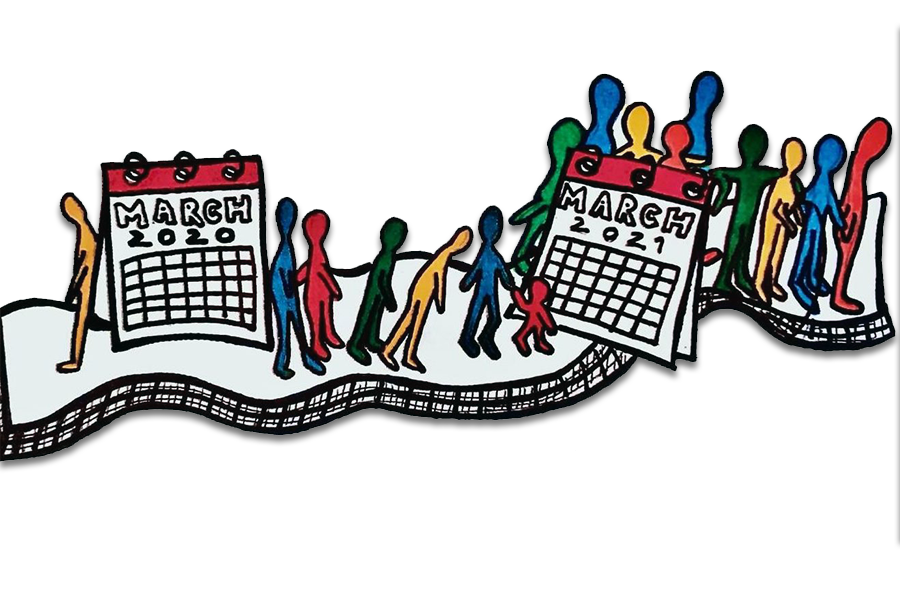 MORE: One in four residents of Los Angeles suffered from food insecurity during the first months of the Covid-19 pandemic, officials estimate. For low-income families, the percentage was almost half. (BP Drawing by Sara Adatto)

MORE: One in four residents of Los Angeles suffered from food insecurity during the first months of the Covid-19 pandemic, officials estimate. For low-income families, the percentage was almost half.

Almost exactly a year ago, Los Angeles schools, businesses, travel, and just about everything else shut down to keep people safe from the coronavirus.

The city’s Jewish food banks didn’t have that option. The stakes for their clients were too high.

Unlike most other businesses, these and other food pantries were unable to close or operate virtually, because with closure, came hunger. That left organizations having to ramp up service and protect their volunteers and employees at the same time. 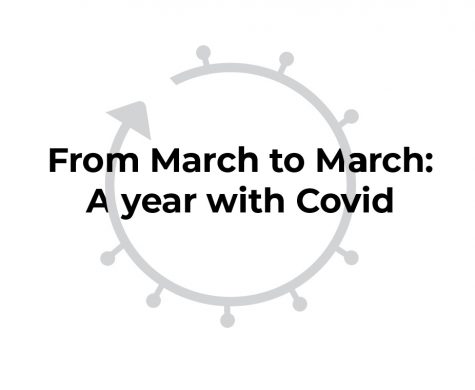 “If we get COVID, we have to close for two weeks, and that’s two weeks of people not getting food,” said Ms. Kathi Dawidowicz, supply and logistics manager of the SOVA Community Food and Resource Program, the food pantry of Jewish Family Service LA.

“At the peak of the pandemic, when it started, it was a truly difficult and nerve-wracking task to be able to safely and efficiently provide services for our recipients,” said Mr. Braunstein. “We didn’t know what we were dealing with and what the safety precautions were, so it was a major challenge to effectively and safely distribute the food.”

Simultaneously, food insecurity — the lack of reliable access to enough food to sustain oneself and meet nutritional needs — was rising.

Before the pandemic, SOVA’s two food pantries, located in Van Nuys and in Pico-Robertson, were helping approximately 100 people a day. In March of 2020 that number grew to 150 a day — a 50% increase from just a month before.

SOVA is mostly staffed by volunteers who are retirees — members of the 65-and-up age group found to be particularly vulnerable to the coronavirus. These volunteers felt compelled to shelter in their homes, leaving SOVA without much staff.

“Everybody scattered, and we didn’t have enough people,” said Ms. Dawidowicz.

My mom told me that they were doing Tomchei and that they needed help… It feels really good when you’re doing it, so we just went whenever they needed us”

Tomchei Shabbos LA, founded in 1977, provides members of the Jewish community with support they need to survive below the poverty line. It delivers Shabbat meals and groceries to more than 1,750 individuals monthly and has been running throughout the pandemic, and has added 100-plus families since the start of the pandemic, according to Mr. Braunstein. March a year ago was particularly difficult as fears around the coronavirus kept volunteers away.

“There were so many unknowns,” Mr. Braunstein said in an interview. “We needed to take it one day at a time and deal with the reality as it came.”

But even as fears around the coronavirus kept many volunteers away from in-person and indoor service, others found new ways of helping out.

Gaby Terech, now a freshman at Shalhevet, had been volunteering at Tomchei LA since sixth grade. When the pandemic hit, he switched from packing groceries to delivering them — and increased his hours.

“My mom told me that they were doing Tomchei and that they needed help, so we just did it once or twice,” said Gaby, who first started working at Tomchei LA for community services hours at Sinai Akiba Academy. “And it feels really good when you’re doing it, so we just went whenever they needed us.”

Around the same time, Chesed Director Ms. Malkie Hametz reached out to the Los Angeles Mission, an organization Shalhevet students have volunteered with multiple times.

“They just said that they were swamped with the amount of people that they now felt like they had to service,” Ms. Hametz said, “and that the number of people who were showing up out of the woodwork who were requesting help and meals and a place to live… They just felt really overwhelmed by the magnitude of what they were seeing.”

The increase in people seeking assistance from these organizations reflected the Covid-induced food insecurity problem county-wide as the rate of food insecurity in Los Angeles skyrocketed to unprecedented levels.

According to the Los Angeles Regional Food Bank’s website, “Before the pandemic, an estimated 1 in 5 people in Los Angeles County lived with food insecurity, but after the COVID-19 outbreak, the number of people needing food assistance has increased markedly. It is estimated that 1 in 4 of our neighbors faces food insecurity.”

A more detailed study from the USC Dornsife Public Exchange, found even higher numbers, with 39% of low-income households and 26.3% of all households experiencing food insecurity in April and May of 2020. In the first four months — stretching to July — the numbers were even worse.

“During the first four full months of the COVID-19 pandemic…, the rate of low-income households that experienced food insecurity (41.6%) was notably higher than the 2018 monthly (5.2%) and annual (26.8%) estimates of food insecurity for this low-income population,” researchers found.

SOVA has nine employees and three drivers, plus many volunteers, and had to close their Westside location due to volunteer shortages. They referred clients to their other location in Van Nuys, while delivering groceries to clients who were older or otherwise more at risk.

Eventually though, they adapted. The West LA location has reopened in October and is continuing to serve an average of 15 or more families a day, according to Ms. Lynda Alter, SOVA’s Client Services Manager.

Some of those who used to be givers, unfortunately, had to be on the receiving end. The cost of kosher food is expensive, and as unemployment benefits and other benefits dwindled away, people’s cost of living and deficit grew.””

It helped that as essential workers, employees of hunger-combating organizations were exempt from stay-at-home orders.

“We get a lot of our food from Los Angeles Regional Food Bank,” said Ms. Dawidowicz, “and at the beginning of the pandemic, they sent out letters that we were supposed to carry with us saying we’re essential workers.”

SOVA also changed its services. Now, instead of in-person pick-up, it delivers groceries to clients who are 60 and older — using private contractors who specialize in passenger transportation and paratransit shuttle services.

“Nobody was going out, so we partnered with them, and they’re the ones delivering the home delivery,” Ms. Dawidowicz said.

Tomchei LA used what Mr. Schneur Braunstein called “capsules” — small groups of volunteers who had only been exposed to each other, like pods — to come in and pack food for deliveries. The strategy worked: Mr. Braunstein said the organization hasn’t had any coronavirus exposures and has been able to remain open the whole year.

“During the pandemic, [some of] those who used to be givers, unfortunately, had to be on the receiving end,” said Mr. Braunstein.  “The cost of kosher food is expensive, and as unemployment benefits and other benefits dwindled away, people’s cost of living and deficit grew.”

Meanwhile at school, the Shalhevet community responded to the crisis with new initiatives.

For eight days in December, the Tikkun Olam Club, which focuses on raising awareness and taking action to help people in need, ran a food drive with SOVA in the school lobby.

On Feb 7, sophomore Ariella Hirschhorn and her family led a chesed project in the Shalhevet parking lot and packed 500 snack packs for the Downtown Women’s Center, which houses women lacking their own homes. To maintain social distancing and keep the event COVID-safe, just one family came at a time.

“We packed 500 bags for them in the Shalhevet parking lot,” Ariella told the Boiling Point via text message, “with one family coming at a time and bringing a lot of one type of item so it was Covid-safe. Some people could only donate and some could only pack, so we matched them together.”

We packed 500 bags for them in the Shalhevet parking lot, with one family coming at a time and bringing a lot of one type of item so it was Covid-safe. Some people could only donate and some could only pack, so we matched them together.””

On Feb 2, Shalhevet juniors volunteered at Our Big Kitchen Los Angeles, an organization that prepares meals for distribution to those in need.

Ms Hametz discovered the organization on Instagram and volunteered herself.

“I went one afternoon to volunteer, and it was incredible,” said Ms. Hametz. “The energy there and the work that they’re doing really blew me away, and I knew that I wanted to bring a group of our students.”

The volunteers made 350 rice dinners and more than 500 cookies.

Existing organizations have felt supported, too. Kathi Dawidowicz said SOVA has received food donations from people who have been homebound.

“I just sent a thank you to a 6-year-old who collected over 200 pounds of food because he was concerned that people wouldn’t have enough food,” Ms. Dawidowicz said. “His mom brought in the food, and she goes, ‘Yeah my son was worried about people not having enough food, because when you watch the news, there’s lines and lines of people waiting for these free boxes of food.’ So he ran his own, just through his friends, and the moms got together, and they just did this food drive.”

At Tomchei, Mr. Braunstein expressed gratitude for his “beautiful community” that has come together to ensure that his organization remains adequately stocked and properly funded.

Gaby Terech and his family now volunteer there once a month or more. They drive through an alley to an area with about four cars to meet a masked volunteer, Gaby said. The masked face gives them three to four delivery locations and puts boxes of food, sometimes with challah, grape juice, chicken, and other snacks — placing it all directly into the trunk of their SUV.

“Before [Covid], there would be a layout through the center of the room with all kinds of food,” said Gaby. “Then around the room, there’d be boxes, where they would give you a list of what you need to put in a box. You pick a few boxes to do and then you go and pick the food you want to put inside of them.”

That made it more social, he said.

Tomchei has invited the Terech family to pack food inside again, but they don’t want to return until Gaby’s grandparents got vaccinated.

“Maybe I might go after more people have the vaccine,” said Gaby.

But he still sees his volunteer experience positively — even during Covid.

“I feel like you learn a lot from volunteering, and you also get a lot from it for yourself,” Gaby said. “You feel like you’ve accomplished something and you’re doing something for other people, so it’s really a good experience.”

Although the rates of food insecurity have come down recently, officials say they remain at unprecedented levels.

That means that organizations like Tomchei Shabbos and SOVA will continue needing support from families like Gaby’s, in order to provide for others and stay afloat during this pandemic.

“We need to consistently think about those who are food insecure, those who could use a warm meal every now and then, those who might be struggling,” said Ms. Hametz.