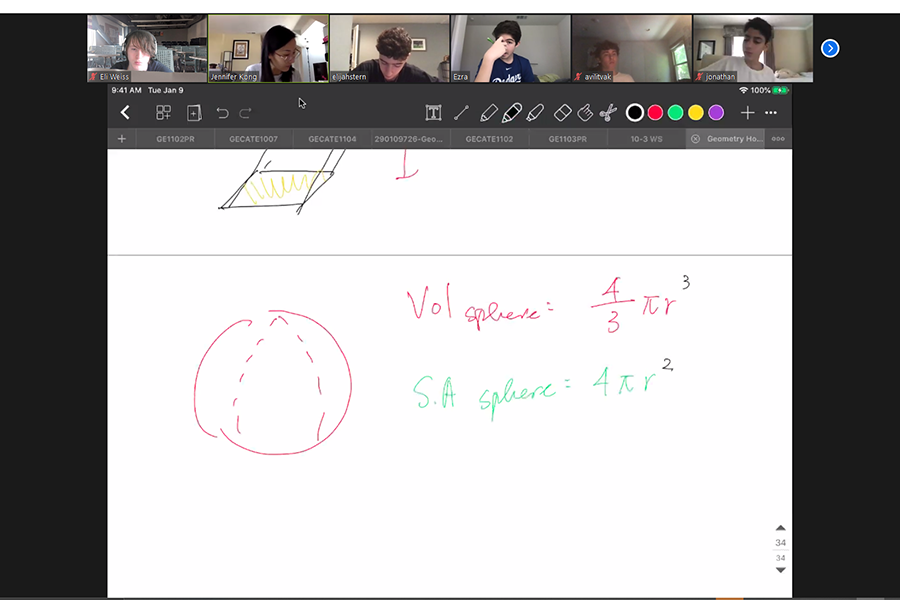 MATH: Ninth-graders in Ms. Kong’s Honors Geometry class studied the volume of three-dimensional shapes on Zoom this morning. Students say they appreciate the reduction in homework, though some still find learning harder via computer. (BP Screenshot by Eli Weiss)

MATH: Ninth-graders in Ms. Kong’s Honors Geometry class studied the volume of three-dimensional shapes on Zoom this morning. Students say they appreciate the reduction in homework, though some still find learning harder via computer.

Class participation and ‘micro-assessments’ replace tests and most homework, though other problems remain

After a stressed-out start to Zoom learning in March, students are reporting lighter workloads and more free time for activities beyond school work since the administration instituted a new “Safety, Workload and Academics” policy after Passover break.

The policy was announced on April 6 in a joint email from Associate Head of School Rabbi David Block and Principal Mr. Daniel Weslow, which said that homework would be reduced to help relieve stress from students.

It also said that tests would be eliminated for the remainder of the year, and that each class would have no more than one micro-assessment per week. 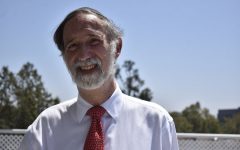 “We were listening to students,” said Rabbi Block. “At the Town Hall, we heard that the workload was a lot and we wanted to make sure that we were being responsive.”

Titled “Pre-Pesach Update – Safety, Workload, and Academics,” the email followed the school’s first-ever virtual Town Hall, held on March 24, which was devoted to how students were feeling regarding the workload.

At the Town Hall, most students complained about the weight of school work they had been receiving since March 16, when online school began due to the rapidly spreading COVID-19 illness.  They described long days of class on Zoom, followed by long nights of homework and studying on the same screens they’d been using throughout the day.

In their April email, Rabbi Block and Mr. Weslow described how classes would be run going forward, and ended by telling parents that help was available for students and parents that need it.

Mr. Weslow said in a followup Boiling Point interview that removing assessments would allow students to try to concentrate their attention on what is going on “in the classroom.”

“We’re going to really focus on presence,” said Mr. Weslow, instead of performance on tests and home assignments.

He defined presence as participating during class and being active during discussions.

“We worked closely with department chairs, administration, and the leadership team with how we can effectively have a meaningful and robust and rigorous college-prep program while being mindful of the stress, anxiety, and uncertainty of the remainder of the year,” Mr. Weslow said.

Tests would be replaced by “micro-assessments,” such as checks for understanding” or quizzes once a week per class, he said.

When the policy was first announced, student reaction to the decision was mostly favorable, though some thought quiet students might be disadvantaged for not speaking up and others — mostly teachers — worried that it would be harder to give students legitimate grades.

Freshman Gabrielle Urman predicted it would remove anxiety from not only students’ lives, but also from teachers.

“The teachers don’t have to worry about students cheating,” said Gabrielle. “A lot of people get anxiety when they hear the word ‘test’ for a class, so it’s good for everybody.”

Junior Jack Resin worried about unintended consequences, but was glad the administration was trying.

“I think it’s the right decision, just considering how many ways it could go wrong, with students and their ability to cheat and all,” said Jack. “Obviously it’s a big change from what we were doing before, but it’s not an ideal situation for anyone, so I think the teachers are accommodating our needs.”

“I think the policy can be good because it takes off pressure,” said Ella. “It’s also bad for people who aren’t into participation, because now participation is a huge factor in the overall grade.”

“I think it’s great,” said English teacher Ms. Michelle Crincoli. “It’s unprecedented times, and I think we have to be able to be flexible with what’s going on.”

Math teacher Ms. Jennifer Kong was worried her students might not get a chance to bring their grades up before the end of the semester.

“If they’re not going to have any more tests, then their grades are suffering already,” said Ms. Kong. “I got emails from my students, and they were worried.”

But after several weeks with the policy in place, almost everyone surveyed by the Boiling Point said the policy was a major improvement for everyone at Shalhevet. Exceptions were those who still find it hard to learn online — something that lightening the workload does not affect.

Junior Jordan Simon said he was finding  General Studies classes much easier because now he can focus on grasping the curriculum without having other worries.

These are unprecedented times, and I think we have to be able to be flexible with what’s going on.”

“English is definitely easier for me because I can focus more on the material and not have to always worry if I’m gonna do well on a test or not,” said Jordan.

Freshman Asher Taxon said the workload had been reduced in all of his classes.

“My homework load in math has gone down significantly and I’m all for it,”  said Asher. “For biology, we’re having discussion-based classes with notes and haven’t really had homework.

Take-home tests have become the new way of assessing students in math, something several students appreciated.

“We’re having take-home tests every time, which is really nice because you’re probably going to end up doing well,” said Jordan. “You have time to check with your friends, and to ask your teacher questions.”

Freshman Sam Graber finds the workload to be easier, but life is still difficult for him online.

“In a class like math we have been getting less homework, but it’s harder to learn because we haven’t been in class,” said Sam.  Teachers are giving us long quizzes instead of tests, so it’s not really helpful, but in a lot of other classes it’s good.”

Members of this year’s senior class have faced a unique challenge with the pandemic, missing out on a lot of things that seniors usually get to do and look forward to for four years.

My homework load in math has gone down significantly and I’m all for it. For biology, we’re having discussion-based classes with notes and haven’t really had homework.”

“Personally, I think the situation with COVID-19 has been tough on all seniors,” said senior Kelly Ciment earlier this month. “With the policy put in place, I think it lightened the situation for us. It is a hard situation we are all in, and no tests and less homework is helpful on our part.”

Dean of Students Rabbi Ari Schwarzberg said finding what works best in every class’s situation would take time, but that the administration is trying to figure out the right path.

“You can’t let the perfect get in the way of the good,” Rabbi Schwartzberg explained. “There’s no way for this to be perfect, we’re always trying to make the best decision for the entirety of the school, and we know that it’s not going to be perfect.”

Whatever the long-term results turn out to be, Marlee Drazin, a sophomore, said that just making a change had been helpful — whether it worked at lightening the school load or not.

“I was glad to hear that there was going to be a new policy put in place,” said Marlee. “That meant that the faculty and administration were actually listening to the students, and it felt like I was being heard.”