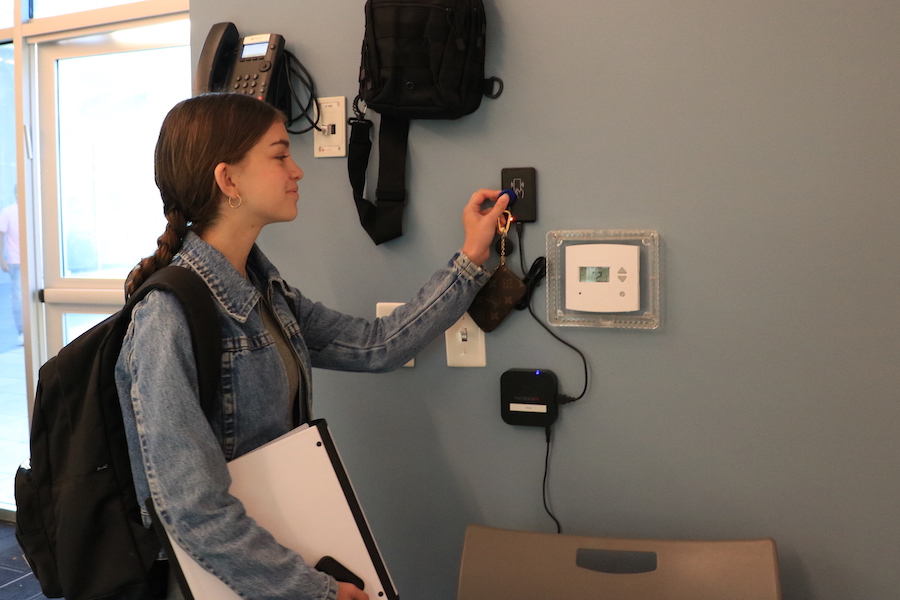 MORNING: Freshman Madeleine Bollag scans in to the main minyan at Shacharit during the second week of school. The fob, which she carries on her key chain, transmits her identity to a computer program that takes attendance and shares the information with teachers who need to know. (Vivienne Schlussel)

MORNING: Freshman Madeleine Bollag scans in to the main minyan at Shacharit during the second week of school. The fob, which she carries on her key chain, transmits her identity to a computer program that takes attendance and shares the information with teachers who need to know.

Before grabbing a siddur and picking a seat, Shalhevet students now must scan themselves into davening by pressing a small blue fob against a rectangular scanning device mounted on the wall, in a new attendance system installed by the administration to ensure every student is present for prayer.

Each student has his or her own blue fob. Devices to scan the fobs have been installed at the doorways of classrooms around the school where minyans are held.

Once scanned in, a student’s ID number is logged in to a spreadsheet, which associates it with the student’s name. A digital system then generates emails to inform teachers of who’s missing, and also sends emails to students to let them know that they didn’t check in.

“The goal is not to be policing,” said Associate Head of School Rabbi David Block. “The goal is to hold each other accountable. In class, no one questions whether you need to be in attendance, so we don’t question that either by tefillah,” or prayer.

The system also assists with regular school attendance, using a scanner device in the lobby by the front door where students scan in as they enter the school.

‘I don’t think anyone talked about ‘We have to get scanners because of an active shooter,’ but it’s on my mind at least, that we have to be ready in all situations — to know when we evacuate the building if every person is accounted for.”

According to Rabbi Block, there were many reasons for creating the system, which was installed over the summer. The primary concern originally was figuring out a way to address the attendance issue for tefilah.

Since there are so many different tefilah options this year, including the main minyan in addition to electives like the meditation minyan, the Hashkama (early morning) minyan and Sephardic minyan, it became difficult to keep track of who was where, he said.

Teachers had to combine lists of students from their minyans, which were often at contrasting times such as before school or after first period. They also had to figure out who wasn’t in school that day, who had davened early and so wasn’t required to be there, and who actually skipped minyan.

Another problem was that student leaders run Hashkama minyan, Sephardic minyan and various other electives, meaning they were the ones taking attendance — causing them to miss much of tefillah themselves.

Senior Gabby Lasry, who is a leader of Sephardic minyan, thinks the scanners do a good job of solving this problem.

“Before, I spent basically the entire davening just taking attendance,” said Gabby. “It was really frustrating because everytime I wanted to pray, I couldn’t.”

“After going to a few davenings” this year, she said, “I realized I’m actually able to sit down and have a meaningful prayer.”

The scanners at the front of the building are connected to those at the minyans. So if someone unaccounted-for in tefillah never scanned into the building in the first place, the system knows they were absent from school that day — meaning they didn’t specifically ditch davening.

According to Rabbi Block, another benefit to the system is safety, since people also scan in at the entrance to school when they arrive for the day. For whatever reason, sometimes teachers don’t take attendance in class or there’s a mistake, he said, so these devices ensure a much more efficient system in which all students are always accounted for.

There have been multiple school and synagogue shootings in the last few years, including one last April at Chabad of Poway, near San Diego. Rabbi Block said the new system would let officials know what students are in the building that day.

“It’s on our minds,” Rabbi Block said. “‘I don’t think anyone talked about ‘We have to get scanners because of an active shooter,’ but it’s on my mind at least, that we have to be ready in all situations — to know when we evacuate the building if every person is accounted for.”

Student reaction to the scanner system has been mixed.

Junior Maya Vaakil said she understands the reasoning behind it.

“I get it, because a lot of people were ditching,” Maya said. “People are actually going to tefillah more.”

Sophomore Benny Blacher thinks the school should spend more time finding ways to make davning more meaningful for students, instead of concentrating on who is there.

“I feel like there’s a lack of trust in the school now that they have to scan us,” Benny said.

“Part of me feels like scanning people isn’t the best option, because let’s say kids, they’re not going to go pray,” he said. “So the school should find more ways to get people to get into prayers more. A lot of kids that go here don’t find it that meaningful.”

Part of me feels like scanning people isn’t the best option, because let’s say kids, they’re not going to go pray, so the school should find more ways to get people to get into prayers more. A lot of kids that go here don’t find it that meaningful.”

Junior Josh Glettner was more sympathetic to the reasons behind the change.

“On the one hand, I understand how it’s necessary for the school to make sure people actually go,” said Josh. “On the other hand, I do think it puts a negative atmosphere in the room because people feel like they’re being forced to be there. The school should do something to make a more voluntary atmosphere.”

Rabbi Block said he and the administration spoke to three or four developers to find the right  system for the school, and looked into many more online. Many were too expensive or didn’t align with the initial vision, he said.

For the final program they decided on, a set of 100 fobs costs about $20.  He said the scanners were paid for through the school’s budgets for tefillah and security.

If someone were to lose their fob, the school will “likely go with some model of charging for new fobs, but we first want to let the year play out a little bit and see how common/prevalent that situation is,” he said in an email to the Boiling Point.

Judaics Studies teacher Rabbi David Stein is managing coding within the system, reducing the cost compared to paying for an outside programmer or app developer, officials said.

In an interview, Rabbi Stein said that over the summer he learned how to program and write scripts for Google Sheets, which he connected through coding to the new scanning system. Rabbi Stein has a Master’s Degree in mechanical engineering from Columbia University, and before becoming a rabbi worked for a year at a firm that designs energy-efficient buildings.

He said there have been some technical difficulties and kinks with the system, including computers getting overloaded and power outlets turning off every day, but he said they’re continuing to “test and refine” it.

On Sept. 5, there were no complications and just about everyone logged into the building and into davening.

“I think it’s gonna be a lot about really having students aware of this and conscious about it,” said Rabbi Stein. “Like, ‘Oh, I have to remember to scan in,” and so on and so forth. I think it’s going to be a process of really getting people used to it. I don’t think we’re there yet, but I think we’re going to get there.”

He said this would change the culture around attendance at davening.

“This way we’re really going back to a system that very much makes it about the student responsibility,” said Rabbi Stein, “but also ensures that there’s accountability as well.” 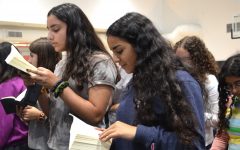 Another benefit of the system is how it improves fire drill procedure. Before, the teachers and admins would use lists of students enrolled at the school when taking attendance outside during a drill, but now they can use lists of who is actually in the building.

According to Rabbi Stein, the school actually only started formally taking attendance at Shacharit davening a few years ago.  When Hashkama minyan started around five years ago, — before they started taking attendance — it became difficult to keep track of who went to early minyan and who didn’t.

Although the administration currently doesn’t take attendance during Mincha (afternoon prayer), Rabbi Stein said that’s because everyone’s in davening more or less at the same time so if a teacher sees someone in a classroom during Mincha, it’s obvious they’re ditching.