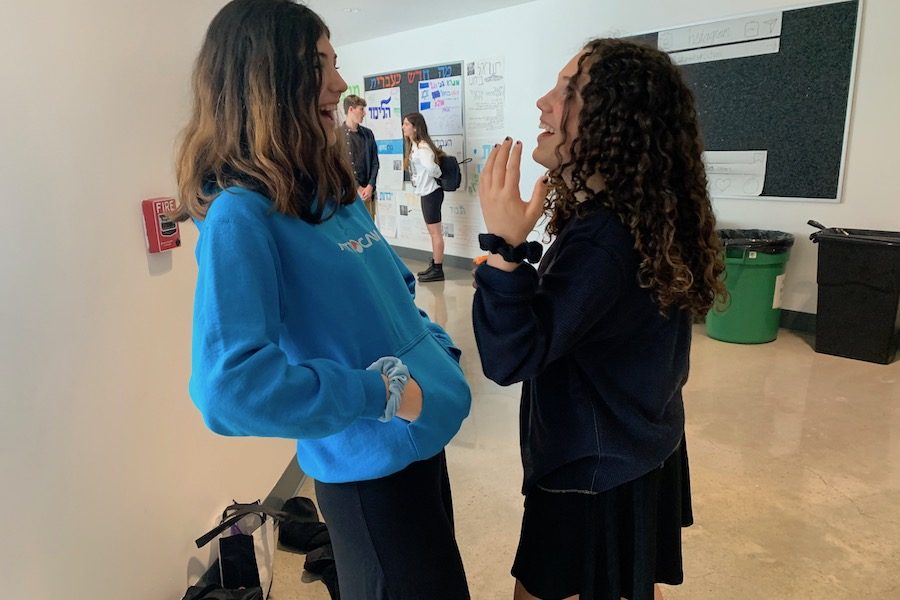 TRENDY: Like many other students, freshmen Eva Brous-Light and Danielle Finn wear scrunchies, a popular hair accessory from the ‘80s, to school -- and not always in their hair.

Popular music and fashion from the ‘50s-’90s are trending in pop culture and at school. Should you thank your parents?

Did Freddie Mercury know that his music would not only still be popular but be the focus of a world-renowned movie in 2018? Did trendy people in the late ‘80s and ‘90s think mom jeans would be fashionable 30 years later?

More and more music and fashion throwbacks have been highlighted in pop culture in the last year, and the trend is growing. Many people who have grown up in the 2000s have become fans of artists and songs from the 20th century.

“I enjoy experiencing music from a generation I didn’t get to live through,” said Lily, who said she started listening to old music partly through her mom.fspo

“The old music I’m typically drawn to is super simple, and usually only includes guitar and maybe one other instrument,” she said, “and I find it more enjoyable than more modern music that has way too many things going on.”

Parental influence is common, especially in music, as is pop culture — for example, hits like Bohemian Rhapsody, which won four Oscars and Best Drama in the Golden Globes. Trends come and go more often in fashion, but even there, specific throwback styles are circulating now from the ‘50s, ‘70s, ‘80s and ‘90s.

“I think I started listening to old music in middle school because my sister was into it, so she got me into it too,” Michael said.

In the case of Bohemian Rhapsody, both influences are at play. The film tells the story of Queen and the life of its lead singer, Freddie Mercury, who lived from 1946 to 1991, when he died of AIDS. It was released Nov. 2 of last year and was still in theatres in late January, unusual considering most movies stay in theatres for about a month.

Many people started listening to Queen’s music after seeing the movie.

The parents today are more involved with their kids than were parents in previous generations — particularly fathers. So, there is more sharing of information (including music) from parents to their kids.”

Sophomore Sophie Handleman listened to Queen before seeing the film, but saw it twice and said she listens to their music more now that she’s been introduced to more of their songs.

“Old music has always been flowing through my house, so now on the daily I listen to ‘50s, ‘60s, ‘70s and more of those types of music,” said Sophie.

What do those of the previous generation think of the fact that so many younger individuals are listening to music from that time?

Professor Ronald Riggio of Claremont McKenna College noticed about five years ago that students on his campus were listening to “really old rock music” such as Led Zeppelin, The Rolling Stones and The Beatles.

It was strange for him to encounter this because he hadn’t realized that his generation’s music was making a comeback. He wrote an article about it in Psychology Today.

“I was walking across campus last spring, and blaring out of several dorm rooms was (surprise) loud music,” Professor Riggio wrote in the article, which was published in 2014. “Only this wasn’t current music, but ‘classic rock’ – Led Zeppelin, Van Morrison, Beatles, and the Rolling Stones.”

Five years later — to his surprise — the professor said he still hears this music being played all the time on campus.

“I’m always blown away,” Professor Riggio said in an interview with the Boiling Point. “I walk by the dorms and I hear the same music I listened to in college 40 years ago.

“They’re playing new music too, but there is surprisingly a lot of that classic rock being played.”

In the Psychology Today article, the professor suggested five reasons for this phenomenon. Perhaps the greatest influence, he said, was more involved parenting. He said teenagers are introduced to older music by their parents and through listening to that music around the house growing up.

“The parents today are more involved with their kids than were parents in previous generations — particularly fathers,” Professor Riggio said in an email to the Boiling Point. “So, there is more sharing of information (including music) from parents to their kids. When I go to rock concerts, I see lots of parents and their children. That was unusual a generation or two ago.”

Second, music from the ‘60s and ‘70s has been well preserved for the current generation, not only through the recording methods of the time but through continuous updating of formats. In other words, records were re-mastered into CDs, CDs were available for sale on iTunes, and everything now is available on Spotify, Apple Music, etc;

Prof. Riggio also thinks it was because musicians from those periods were mostly singer-songwriters, performers who wrote their own music and could ensure that it reflected their feelings. Today, few artists write their own songs, but those who do are very popular such as Taylor Swift and Ed Sheeran.

“If you talk about The Beatles and the Stones and all that, they not only performed their own music but they wrote their own music,” he said. “There was sort of the appreciation for the artistry of both writing and performing your own music.”

And finally, so-called “baby boomers” — his generation, which first listened to rock music — now control many media and are selecting older music being selected for play on radio stations, in television shows and in film.

“There’s a lot of these classic rock stations and part of that is because my generation, we’re kind of a big market,” he said. “We’re older people with money, so I think there’s kind of a market to those people. I think that keeps it going. If you look at the soundtrack of movies, a lot of movies are using that kind of classic rock.”

Those same trends could be influencing more than music. Senior Gabby Grunfeld, co-president of the Shalhevet Fashion Club, said she has noticed that many clothing styles lately mimic trends from the mid-late 20th century.

“I’ve noticed a lot of different styles being reimagined and refocused into something that’s a little more modern but still has a lot of the same retro elements,” Gabby said.

Some examples she gave were jackets from the ‘50s, including bomber jackets, windbreakers and motorcycle jackets. According to her, stores such as Urban Outfitters, Forever 21 and Zara sell clothing that incorporates style from different eras.

Gabby also has noticed Target selling styles from the ‘70s, like floral print maxi-dresses. This style of dresses was highlighted in the Shalhevet fashion show in January, especially since it’s a fashionable look for Orthodox women who also seek modesty.

Prof. Riggio thinks that, too, can be a sign of parental influence.

“Kids today might see their parents wearing clothes from the 70’s or 80’s and they might go, ‘Wow that’s kind of cool,’” he said.

Hair-wear from the past is also back, for example the hair accessories known as “scrunchies,” which were huge in the 80’s. Scrunchies are thicker fabric hair ties that typically are colored or have some sort of cool design on them.

Urban Outfitters, a popular store for teenage girls, has a large collection of them now and it’s quite common to see Shalhevet students wearing them either to in ponytails or as soft bracelets on their wrists to match their outfit.

In fact, the girls in Choir Hawks bought matching $18 dark red velvet scrunchies  to wear on their wrists when they perform in their dress outfits this year.

Hannah Friedman, co-president of the Choir Hawks, said she and co-president Josh Sarir thought of the idea when deciding how to bring some flare to the girls’ outfits, which were otherwise all black.

A lot of times people start to run out of ideas or people have different mentors or icons or different people that they look up to and they start dressing like them, or they are inspired by them in the clothing that they design.”

“Josh and I walked around and tried to look for red accessories to make things a little bit more exciting, and then we came across those,” Hannah said. “We thought it would be perfect, the red and black, especially because scrunchies are something we know people can use everyday after.”

In a 2018 article called “The Scrunchie Makes a Comeback, Some Priced at Near $200,” the Los Angeles Times said scrunchies came back through a fabric recycling maneuver.

“The scrunchie trend ironically rolled back into fashion circa 2010, when Dov Charney blanketed American Apparel’s cash wrap shelves with the fluffy hair tie, a maneuver to recycle and profit from fabric scraps,” the article says.

Gabby thinks all these fashion comebacks are happening because people get inspired by those they look up to.

“A lot of times people start to run out of ideas,” said Gabby, “or people have different mentors or icons or different people that they look up to and they start dressing like them, or they are inspired by them in the clothing that they design.”

All of these throwback trends are circulating rapidly and it doesn’t look like they’re dying down any time soon.

As for Freddie Mercury, perhaps he always knew that his music would be popular for a while — though he might have been surprised that the reason would relate to parenting. He married but never had any children of his own.

Although the Boiling Point could not find an original source, many colleagues and websites have quoted him as saying  “I won’t be a rock-star. I will be a legend.”

Almost everything “Bohemian” is back in fashion now — and the rhapsody by that name perhaps most of all.

Top Stories Waking up early to learn something different 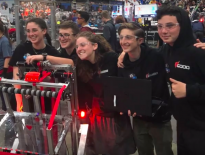 Community What is Robotics?