GLOOM: The weather reflected the feelings of the crowd as hundreds stood and watched the funeral on a screen right outside. (BP Photo by Ashley Botnick )

GLOOM: The weather reflected the feelings of the crowd as hundreds stood and watched the funeral on a screen right outside.

Her favorite song was Eshes Chayil — Woman of Valor — sung around tables on Friday nights just before Kiddush, as several speakers pointed out over the course of her funeral Monday in the town where she lived.

And so, as Lori Gilbert-Kaye was laid to rest, her family, neighbors and friends sang Eshes Chayil to her one last time.

Two days before, a 19-year-old white supremacist had opened fire with an assault rifle in the lobby of Chabad of Poway during Shabbat services, killing Mrs. Kaye and injuring her rabbi, Rabbi Yisrael Goldstein, along with eight-year-old Noya Dahan and her uncle, Almog Peretz, 34.

Mrs. Kaye had stepped in front of Rabbi Goldstein and saved his life while losing her own.

Anjelica Feig, a senior at San Diego’s Torah High School and a resident of Poway, said the town 22 miles northeast of San Diego is considered safe.

“We just moved there two years ago and we moved there because we wanted a safe atmosphere for my younger siblings to grow up in,” said Anjelica, who is known to several Shalhevet seniors through mutual friends who knew her from NCSY.

“Nothing happens there because it’s just pleasant people,” she said the day after the attack. “It’s just tucked away, inland. It’s the country.”

Anjelica said the shul’s members are mostly elderly people and families with young children, and not many teens. She attends once or twice a month, and said there are 40 to 50 people present on a typical Shabbat.

Attendance was higher April 27 because it was the last day of Passover.

“I’ve seen a [security guard] there when there have been big events, but not on a typical Shabbat,” Anjelica said.

The shooting took place six months to the day after one at the Tree of Life Synagogue in Pittsburgh killed 11 Jewish worshipers and injured seven more. This time, the attack was just a two-hour drive from Shalhevet.

Rabbi Goldstein was shot in both hands and lost his right index finger. Filmed later that day by chabad.org in the hospital where he was recovering, he said the attack began as his congregation was finishing up the Torah reading for the eighth day of Pesach.

He said he’d stepped out to “freshen up” before reading the Haftorah. In the lobby, he met Mrs. Kaye, who asked him what time Yizkor would be.

He told her it started at 11:30, and as he turned around, he heard the first shot.

“I got up on a chair and yelled loud and clear, with my fingers bleeding profusely, saying ‘Am Yisrael chai’ — nothing is gonna take us down,” says Rabbi Goldstein in the video, which was posted on Facebook.

Mrs. Kaye’s funeral began at Chabad of Poway and ended at El Camino Memorial Park. Among hundreds in attendance were nine seniors and two juniors from Shalhevet, who responded to Head of School Rabbi Ari Segal’s announcement on Schoology that he would be driving a van for whomever wanted to go.

Senior Ariella Sassover went to the funeral to show solidarity and Jewish strength.

“After the constant anti-semitic attacks that have been happening around the country and around the world, I had to show support for one that was especially close to my community,” Ari said. “It can be really easy to hear about these events and feel sad and afraid but not do anything about it.”

Among the speakers were Elan Carr, U.S. Envoy for Monitoring and Combating Anti-Semitism; Eitan Weiss, the Acting Consul-General of Israeli for Los Angeles and the Southwest; Mrs. Kaye’s husband, Dr. Howard Kaye; her daughter, Hannah; and Mrs. Kaye’s sister, Randi Grossman, who lives in Pico-Robertson and is West Coast director of Chai Lifeline.

Also in attendance were the other victims of the attack; at least 20 Chabad shlichim — rabbis who are emissaries of Chabad’s teachings; Jewish, Christian, Muslim, Sikh and Chinese religious leaders; leaders of law enforcement; the mayor of Poway; and three San Diego-area members of Congress.

Chabad of Poway synagogue president Sam Hoffman addressed the crowd first and then introduced the other speakers as they came up to speak. Mr. Hoffman welcomed all the guests and thanked the shul’s next-door neighbor, St. John’s of Damascus church, which opened its doors last Saturday to help victims and again during Monday’s service so those standing outside could use their facilities. Over the years the two institutions have also shared furniture and parking space, he said. 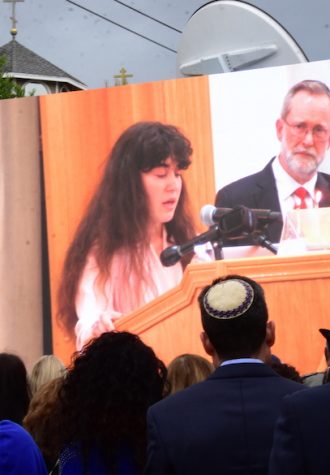 MOURNER: Mrs. Kaye’s daughter Hannah said she and her mother had overcome temporary estrangement. “We marveled at the joy of one another, where we found incredible acceptance for our differences and where we celebrated them as much as we could with music and dancing.

“Thank God that you are with us,” said Mr. Hoffman.

Mrs. Kaye’s daughter Hannah, 22, gave an impassioned eulogy for her mother, describing a time when they were estranged and how they had reconciled. Hannah said that for the last two years, she wrote thank-you letters to her mother on her own birthday, thanking her mother for having her, raising her and being her “best friend, my greatest advocate and my dance partner.”

“Behind every action or intention whether it has frustrated or pleased me has and will always be her love for me,” said Hannah, who is a student at UCLA. “We became each other’s closest confidants. We marveled at the joy of one another, where we found incredible acceptance for our differences and where we celebrated them as much as we could with music and dancing.”

Hannah said they took long drives together and listened to music, talked about everything, and overcame their differences to appreciate each other wholeheartedly.

She said her mother taught her “radical empathy.”

“I am telling you that our story was, is, and will forever continue to be nothing short of remarkable,” Hannah said. “We are magic together. Together, we achieved the impossible dream. A mother who I’d telling anything to, who could listen to me without judgment, who would advocate for things I need to support myself. I wanted a mother who would see me as I wanted to be seen, who would love me as I wanted to be loved. My dear mom, my sweet Lori Lynn, you gave me all of this.”

During their last drive together, Hannah asked her mother if she was proud of her, something she would ask often.

“I’m so proud of you,” she said her mother said.

Rabbi Cunin encouraged people to take on mitzvot in Mrs. Kaye’s memory, saying women should light candles, men should wrap tefillin and non-Jews should observe the seven Noahide laws, which include not stealing, not murdering, setting up courts and not worshipping idols.

Davinder Singh, founder of Duwara Consciousness Foundation, a Sikh food pantry that serves people regardless of religious beliefs, said he attended to show solidarity with the Jewish community.

COMMUNITY: Visible on the outdoor screen, the sanctuary of Chabad of Poway was filled to capacity during Monday’s service for Lori Gilbert-Kaye.

“A human being has fallen due to ignorance and bigotry,” Mr. Singh said.

So many people attended the funeral that while hundreds were present inside the synagogue, hundreds more watched on a wall-sized screen outside, though the weather was cold and rainy. Both synagogue and graveside services were also streamed live on Facebook by StandWithUs.

The synagogue service began around 2:15 and ended at 4:15. Attendees then drove 40 minutes to get to El Camino Memorial Park in Sorrento Valley, where the funeral concluded. Shalhevet’s van returned to school at around 8 p.m.

But for Anjelica and many others, the events of last Saturday will endure, at Chabad of Poway and beyond.

The shooter, John Earnest of San Diego, is facing one charge of murder and three counts of attempted murder. At his first hearing, May 1, he pleaded not guilty. His next hearing is scheduled for May 30. 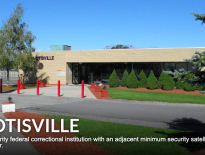