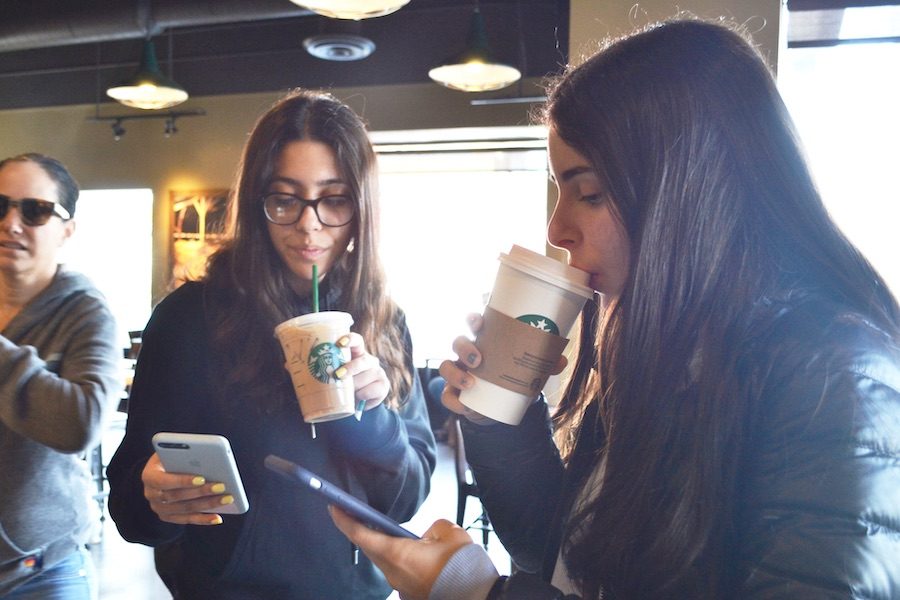 CLOSE: Starbucks and Coffee Bean are frequented by Shalhevet students throughout the day. Above, juniors Celine Basiratmand (center) and Maital Hiller drank coffee during breakfast Feb 15.

Citing Student Handbook, Fairness rules admin cannot enforce school rules at Starbucks if student has not checked in to school

In the first public Fairness case of the year, a ruling based on a technicality raised but did not clearly answer the question of when and whether students have to follow school rules when off campus.

Senior Donna Grunfeld brought the case to the Fairness Committee Jan. 7 after she was approached at school by Dean of Students Rabbi Ari Schwarzberg, who said that another administrator had seen her wearing pants and eating non-kosher food while at Starbucks on Fairfax and Olympic during school hours that day.

Even though Donna had not signed into school yet, Rabbi Schwarzberg suggested there might be a consequence for similar behavior in the future. He told her that students should follow school rules while in the vicinity of Shalhevet on school days, even if they haven’t signed in to school yet.

And though he said he would not recommend any consequence for her actions this time, Donna felt that the administration should not be able to make a such a rule in the future either, and asked Fairness to clarify.

“I didn’t think it was fair to have me follow school rules while not in school yet,” said Donna in an interview later.

The trial began with Fairness co-chairs Jordana Glouberman and Jonathan Fishman asking questions of Donna and Rabbi Schwarzberg, both of whom were in the room.

Later, they began talking to each other in a more conversational form.  Anyone was allowed to hear both sides speak, but the committee deliberation was done in private.

Though there was no publicity about the hearing, 30 students were present.

The next day, the committee announced at Town Hall that since the online Student Handbook makes no mention of rules applying to students when they are not checked into school, Donna hadn’t violated it. The committee did not rule on whether Rabbi Schwarzberg should have approached Donna, or whether he could in the future if a similar issue is reported.

“The ruling was that according to the Handbook, Donna didn’t do anything wrong, and there’s nothing we could have done,” said Jordana. “But if the administration wanted to change the policies of dress code or any other policy to extend to Starbucks and Coffee Bean too, then that would be up to the administration.”

While the current version of the Handbook states that students can go to only kosher restaurants during school hours, it does not specify whether students have to be in dress code in the same scenario.

“During school hours or when involved in school related events,” the Handbook states in the section called Off Campus Privileges. “You are only to eat in kosher restaurants and buy kosher food/drinks (certified) from Starbucks, 7-11s and convenience stores in general.”

The form necessary to initiate a Fairness case includes the option of making a case public, if both parties agree.

Fairness co-chairs Jordana and Jonathan both felt that the case being public helped the student body understand how Fairness worked.

“It was a case that really applied to everyone, not just Donna and Rabbi Schwarzberg,” said Jonathan. “Having people there benefited everyone.”

Interviewed later by the Boiling Point, Rabbi Schwarzberg said he would consider changing the policy but would first want to appeal the case — that is, ask for the Fairness Committee to reconsider —  if it’s possible.

“Would we go ahead and amend the handbook?” said Rabbi Schwarzberg. “I guess that’s something we could discuss. I don’t think that we’re running to do that.”

There is no mention of cases being able to be appealed in the school Constitution.

Donna said that she felt that amending the Handbook would go against the spirit of the Just Community.

“If you’re gonna claim that Shalhevet is a place where students have a voice, and I’m very happy that we have Fairness, I just don’t think it’s fair to change a rule in the Handbook because you didn’t agree with Fairness’ conclusion,” she said.

Rabbi Schwarzberg disagreed, saying that the difference between Shalhevet and non-Just Community schools, where the administration sets rules and students have to follow them, is mainly about discussion — not about who makes the rules.

There are certain things where the school can have standards about the way that students should behave and conduct themselves, because that does have an impact on the values and the goals of Shalhevet High School.”

“When it comes to rules, there’s not a tremendous difference” between Shalhevet and non-Just Community schools, he said.

“But what the Just Community does and allow, and Town Hall allows, is that students and faculty are constantly talking about this,” he said,  “and I don’t think that conversation and dialogue is happening at a lot of other institutions… The more we have conversations about that, it allows us to understand one another.”

He pointed to two cases where student opinion was heard by the administration in a Town Hall and a policy was changed. One involved the Friday schedule.  Last January, after a three-month trial period of early dismissal instead of Friday lunches, a Town Hall vote favored the plan and the administration made the change permanent.

Another proposal Sep. 2017 led to male students being allowed to wear non-collared shirts to school if they are wearing tzitzit that show.  It was proposed by then-juniors Jonathan Fishman and Eitan Remer, and the administration approved it.

Rabbi Schwarzberg said it was important to maintain the school culture off campus in places Shalhevet students frequent. 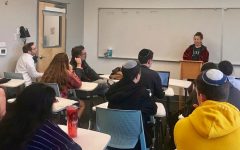 “There are certain things where the school can have standards about the way that students should behave and conduct themselves, because that does have an impact on the values and the goals of Shalhevet High School,” said Rabbi Schwarzberg.

“My point is that if a student is at Starbucks or at Coffee Bean or in a parking lot, let’s say, that constituents — stakeholders in Shalhevet — regularly frequent, those students should be representing or demonstrating the values of Shalhevet even if they technically have not started school yet,” he said.

“Because you might have other students that are going into Starbucks. Parents might be there, teachers might be there. There’s a culture that you’re trying to create and culture is not limited to a particular space.”

Donna says that since she was not signed in to school yet, for her it was not “school hours” and so the school should not have jurisdiction over her.

“I don’t think it’s fair to say that public areas are now going to be under Shalhevet’s control,” Donna said.