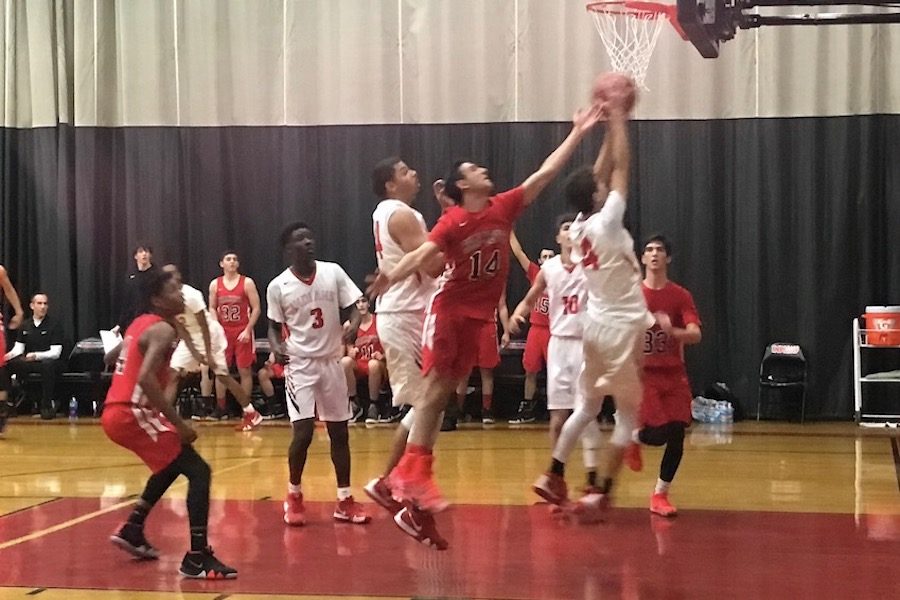 DEFENSE: Firehawk forward Jeremy Asheghian attempts to block a lay-up in the Firehawks’ CIF playoff loss against the Palm Springs Indians 56-48 Feb. 14. The Firehawks were the first Jewish team ever to advance so far into the CIF Southern Section Division 3A playoffs.

It was the first time a Jewish basketball team had made it this far. After moving up a division and beating tough teams like Lawndale and San Dimas, the Firehawk boys team had made it to the quarterfinals of CIF’s Southern Section Division 3A — third-toughest in the southern half of the state, a division in which no Jewish high school had even competed until this year.

The crowd that had been bused to the desert for the occasion– including administrators, teachers and 28 students who’d been let out of school two hours early  — was ready.

The lights inside the Palm Springs High School gym were bright, and the Firehawks, 24-7 this year and seeded fourth, geared up to take on the 25-5 Indians, seeded fifth.

And though the 120-mile ride in the rain had taken more than four hours, the ruach, or spirit, was electric.

But it wasn’t enough.

After a long and fierce battle of a game, Shalhevet fell to Palm Springs 56-48 in the CIF Southern Section Division 3A quarterfinals, on a rainy Thursday night, Feb. 14, in Palm Springs.

“We just tried to keep our heads up,” said Firehawk forward Asher Dauer, who was named co-MVP of the Glouberman Tournament in November. He said everyone on the team, including coach Ryan Coleman, was aware of the stakes.

“Ryan at every timeout was telling us to keep our heads up,” Asher said, “and kept reminding us that this could potentially be the last game of our season and that we have to give it our all.”

For some, it felt familiar. Just two years ago, the Firehawks ended their season in a close defeat to the cross-town Milken Community High School for the championship of Division 4A — the first time two Jewish schools had competed against each other for any CIF division title.

Now it was only a quarter-final, but it was Division 3.

A coin toss had determined it would be an Indians home game, even though Shalhevet was seeded higher. Athletic Coordinator Jeff Remer said the four and a half hour drive for the boys took a toll on the Firehawks.

“When you’re on a bus from 12:30 and arriving at 5:00, and every time you try to get to the game the road that you’re supposed to take is closed, and you have to go through Cathedral City, and back track back, you know there’s just an element of stiffness and stuff, and it’s hard to get loose,” said Remer.

Whatever the reasons, the Firehawks made a valiant attempt but fell short as the Indians dominated defensively, spoiling the Firehawks’ strategy of being aggressive on offense.

“Our plan was to attack them on the offensive glass,” said Coach Coleman. “Try to keep them off the glass on their end. We were trying to attack the rim at every opportunity we could.”

But they were met by a dominant Indian defense that prevented them from taking the shots the players wanted. That meant they were unable to take high quality shots.

“I think we took too many contested shots,” he said. “We played a little bit out of character. We weren’t as patient as we normally are. From that aspect, it was a little disappointing.”

On the defensive side, the Firehawks played hard but were lacking in height compared to their opponents. Also, the Indians managed to beat the Firehawk strategy of surprise.

“We were just trying to confuse them and give them different looks,” Coach Coleman said. “They’re a really good offensive team.”

The Firehawks’ tallest active player was senior forward Noah Rossi, who is 6’1.  The Indians had a 6’6 center, Parker Hunt, who dominated the paint and secured crucial rebounds. Throughout the game, it was apparent that the Firehawks could not contain him.

Because of the height difference, the Firehawks decided before the game that they would double-team Hunt if necessary. And that’s exactly what they did.

“That was the game plan from the beginning,” said Noah. “But after a while of him being a good basketball player and him finding the open man after the double, we had to abandon that and try to figure something else out.”

Eventually they worked it out, said Noah, and put two men on him.  But it was too late.

“Towards the end of the game, we played good defense, but we just couldn’t get to the finish line,” said Noah.

Palm Springs guard Isaiah Goad said after the game that the team’s offense was centered around Parker’s versatility.

“We just played off of him, and if he gets the ball inside, he’ll make a great play,” said Isaiah.

Coming into the game, the Indians knew beating the Firehawks would be a challenge, said Indians coach Chris Howard.

“Everyone plays hard, everyone’s a threat,” Coach Howard said of the Firehawks. “Very difficult to scout for.”

He said much of the Indians’ strategy was devoted to containing the Firehawks’ best player — and the de-facto team leader — senior point guard and Glouberman co-MVP Zack Muller.

“Everyone plays hard, everyone’s a threat. Very difficult to scout for.”

Number four Elijah Goad — Isaiah Goad’s twin brother — was tasked with battling it out with Zack, and the two were constantly going at each other each play of the game. Zack ran the offense and would try to facilitate a play each drive.

“He was a good player — it was very intense,” said Elijah. “It was hard guarding him but I just had to try to get it done for my team.”

Shalhevet’s Asher Dauer said the team had planned to set screens and attack the basket. He also said the Firehawks liked that the Indians gave them a man-to-man defense.

“We were really excited that they played ‘man’ after facing zone [defense] the last couple of games, cause we usually thrive off of man,” Asher said. “We’re pretty good off of isolation and dribble penetration.”

But things were rough for the Firehawks as early as tip-off.

The Indians started off the game shutting down the Firehawk offense, which didn’t score until there were four minutes left in the first quarter.

The Firehawks played a 2-3 defense, which means two smaller men were towards the front of the play and the other were towards the basket. Each set of men was in a straight line, five feet apart.

The first Firehawk basket of the game — a long two-pointer — was made guard Ze’ev Remer, and the Shalhevet crowd went nuts. The score was now 7-2 in favor of the Indians.

Another key factor for the Firehawks was stellar play by junior Jacob Ben Ezra, who usually comes off the bench but this time got the start.

After Ze’ev’s basket, Ben Ezra got the ball back after a steal and put up an acrobatic layup to get a clutch basket for the Firehawks.

Senior forward Jeremy Asheghian then was sent to the line and hit one of two, which brought the score to 12-5 Palm Springs with 2:05 left in the first quarter.  Going to the free-throw line was a common occurrence for the Firehawks; the Indians had nine first-half fouls, which meant the Firehawks spent a good part of their night at the line.

Next, Zack Muller got an offensive rebound in a sea of Indians’ defenders and put the ball back up to bring the game to 16-9. He then made another stellar play, saving the ball from going out of bounds and finding Asher for an easy layup.

At the end of the first quarter, the Firehawks trailed 16-11.

After a quick break, the team seemed much better composed to start off the second. Asher made a tough layup to cut the lead to three points.

Following a tough shot by Elijah Goad, Noah Rossi hit an amazing backwards layup, the score now 18-15.  But after the play, Noah was visibly hurt and eventually exited the game.

“I strained my hamstring almost a month ago,” said Noah. “Going into the game, I tried making a move, or playing defense; it happened twice. My kneecap is really weak.

“And then I tried playing again and I put a bunch of like cream on it. I tried to help myself but it didn’t work out.”

Still, after a lay-up by Parker, the Firehawks rallied and ended the half with momentum. Asher Dauer hit a tough shot and Zack Muller hit a one-of-a-kind layup. He drove in the lane, powered his way through and was fouled for the and-one.

Down 29-22 at halftime, the Firehawks used that momentum to propel them during the second half, with great put-backs by Jacob Ben Ezra, tough shots by Asher Dauer, and stellar play by Zack Muller.

In the third quarter, the Firehawks cut the deficit to four points. Specifically, Zack made a play that was spectacular — he pump-faked his man, drove in the lane, got the shot up, and got sent to the free throw line. The fans were going wild.

But both teams kept on fighting. Palm Springs countered with a three and Asher Dauer matched it with a three-pointer of his own. At the end of the quarter, Shalhevet was still down by four.

To start the fourth, senior forward Jeremy Asheghian hit a huge three to bring the game to 39-38.

After Parker hit one of two free throws, Jacob Ben Ezra managed a huge offensive rebound and layup to tie the game. It was the first time the Firehawks hadn’t trailed.

Though it looked like the Firehawks had the momentum, from this point on, they lost their grip. The Indians went on a 17-8 run to finish the game, ultimately shutting down the Firehawks on all cylinders.

When it was over, Zack came up to Noah, and it was all emotion from that point on. Both players — and others, too — were bawling.

“You played an incredible game,” said Noah to Zack.

“Zack’s been my best friend since elementary school and he’s a huge reason why I switched to Shalhevet in 12th grade,” he said. “He brings out everyone and makes everyone better.”

It was as if Shalhevet was Moshe and had been prevented from entering its promised land. After months of preparation, Shalhevet had reached the farthest a Jewish team had ever gotten in California.

After the game, the fans on the bus were silent. It was dark in Palm Springs; matching the tone of the Shalhevet community.

Asher tried to move on from the loss.

“I’m obviously really disappointed about the loss right now, but hopefully we’re going to keep moving forward,” said Asher. “We’re lucky enough to be able to play in another tournament — the Sarachek Tournament — unlike the rest of the teams in CIF.”