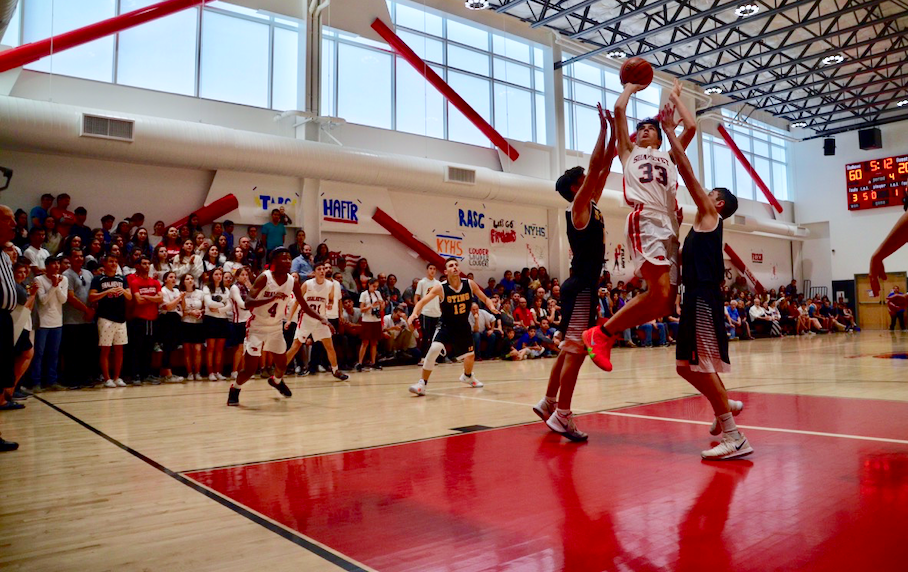 DOMINANT: Asher Dauer, No. 33, jumped for a bucket in the closing minutes of Sunday’s championship game against the SAR Sting. The Firehawks led the entire game and won the boys’ tournament easily, with 11 points their smallest margin of victory over four games. ( BP Photo by Kate Orlanski)

DOMINANT: Asher Dauer, No. 33, jumped for a bucket in the closing minutes of Sunday’s championship game against the SAR Sting. The Firehawks led the entire game and won the boys’ tournament easily, with 11 points their smallest margin of victory over four games.

For the first time in school history, the Shalhevet Firehawks boys team have won the championship of the tournament their own school hosts and founded, the annual Steve Glouberman Basketball Tournament, held each November in the Reich Family Gymnasium. 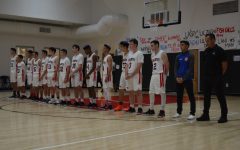 The girls team, which finished 3rd this year, had won the championship in 2015. But for the boys, 2018 was the year they made Shalhevet history. With the Shalhevet gym packed full of roaring Firehawk fans, the team’s undefeated journey to the finals culminated in a blowout victory, 64-23, over the SAR Sting of Riverdale, N.Y., on Sunday afternoon, Nov 4.

In addition, for only the second time in tournament history, the MVP award was given to two players — Firehawk guard Zack Muller and forward Asher Dauer, who were named co-MVPs.

Zack, whose 20 points in the championship game made him the Firehawks’ lead scorer, said he was proud to share it with Asher.

“He’s my brother,” Zack said after receiving his trophy. “We left it all out on the floor this weekend.”

Asher scored just six points on Sunday and on Friday, and eight in Game 2 against eight against TABC. But in the seeding game on the first night of the tournament, Zack was out with an illness and Asher scored 15 points in Shalhevet’s victory against Valley Torah, Wednesday night Oct. 31.

In Game 2, with Zack back in action, the second-highest scorer was sophomore Ze’ev Remer, with nine points against TABC of Teaneck, N.J. Muller scored 19 points in that game. Statistics for Game 3 were not available as of Sunday night.

After the awards ceremony, Asher said he was surprised to hear his name called out as the crowd cheered loudly from the stands.

“I’m just thankful for the opportunity I had to win it,” Asher said.

The championship game’s score wasn’t ever close. The Firehawks closed out the the first quarter with a 16-4 lead over the Sting, and maintained a 34-13 lead going into halftime.

In fact, the home team had dominated every game it played, with the possible exception of Game 2, which ended in a mere 11-point victory over TABC, 48-37.

The Firehawks defeated the Frisch Cougars 53-29 in the quarterfinals, and in the semi-final match against Ramaz, the final score was 61-38.

The Sting, in contrast, had lost one game in the tournament, 53-56 to Ramaz in Game 1. They would later bounce back, beating the Valley Torah Wolfpack 37-35 on Game 2, the RASG Warriors 51-43 on the quarterfinals, and TABC, 34-33, in the semifinals.  Three of those games were very close, compared to the Firehawks’ comfortable victories.

‘I knew that we were going to finish the job today,” Coach Coleman said.

The SAR-TABC game started just after midnight and ended at approximately 2 A.M.

“I think we really [didn’t have] our legs under us after finishing at 2 or 3 A.M. last night,” Coach Halpert said. “But the Firehawks played great… and they deserved it.”

In the Firehawks’ semi-final victory over Ramaz on Saturday night, junior forward Jacob Benezra made the first– and only– slam dunk of the tournament on a fastbreak. With Sting defenders in close pursuit, Jacob  made a fantastic leap, then held onto the rim for a few seconds after slamming the ball downward through the net.

“I couldn’t even hear myself after afterwards because the crowd went crazy,” said Jacob in an interview after the game.