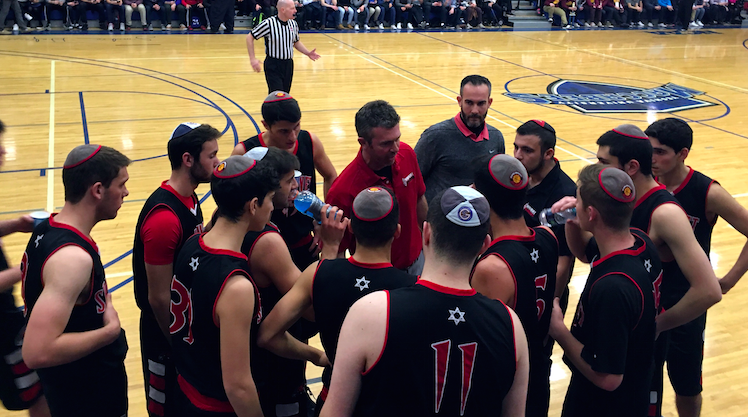 Bowing to a bylaw, Firehawks choose Sarachek over state finals

A web of CIF rules prevented them from doing both. At Sarachek, they lost by 2 in the championship -- just as they had at Division 4A against Milken.

Losing to Milken in the Division 4A championship game should have sent the Firehawks to the first round of the CIF State Division 5 Boys Basketball Championship, held March 8 against Guajome Park Academy.

But it didn’t happen.

That’s because under Bylaw 600 of the California Interscholastic Federation, the Red Sarachek Tournament they played in at Yeshiva University days earlier made all of the players on the team ineligible from playoff action this year.

The problem was timing. It would have been allowed if the New York tournament had been during the CIF’s regular season, but since it was during state playoff week, going to Sarachek would have violated the bylaw.

Mr. Thom Simmons, the CIF’s Southern Section Director of Communications, explained the rationale in an interview with the Boiling Point.

Bylaw 600, titled “Outside Competition,” states that a high school student becomes ineligible once he plays on an “outside team” in the same sport. Playing at Sarachek made the Firehawks an outside team, Mr. Simmons said, because Sarachek is not run under CIF rules.

According to Simmons, a CIF team is allowed to play in up to three outside tournaments during the “season of sport” Nov. 21 – Feb. 10, but specifically not during the time of CIF playoffs.

Bylaw 1612 states that a team can play in up to 20 games, including tournaments, but not during CIF Southern Section and CIF State playoffs.

Bylaw 1613 states that league competition ends on Feb. 10, and then all non-league contests end Feb. 11. If Sarachek were scheduled during the earlier period, the Firehawks could have played in it without penalty.

If the Firehawks had defeated Milken March 1 and won the Division 4A championship, the same rules would have applied.

Meanwhile, the same problem affected the Valley Torah Wolfpack. The Wolfpack qualified for the state playoffs from Division 5AA, but because of Sarachek they were replaced by Foothill Christian.

Faced with a choice between Sarachek and the CIF finals, Shalhevet chose Sarachek, the annual Yeshiva University-sponsored contest for Orthodox high schools in New York.

Firehawk basketball coach Ryan Coleman Coach Coleman explained the situation to the Boiling Point after the two-point loss to Milken.

“CIF ruled that we can’t play both Sarachek and in the state championships,” said Coach Coleman. “We tried to petition, but then they didn’t want to hear it.”

He said he hadn’t been aware of the bylaw before signing the team up for Sarachek.

Coach Coleman and most team members said they would have preferred to participate in the CIF state competition, but that by the time they learned they’d qualified, arrangements for Sarachek had already been made.

“A lot of families and school put a lot of money into the trip to New York,” said Coach Coleman, now in his second year as head basketball coach and his first as Athletic Director. “It would have been insensitive to ask all of the families and the school to forfeit all of the money that was spent on the trip.”

He said he would rather have rather played in the state playoffs because the Sarachek tournament ended up not going their way, and “geographically it presented a huge challenge with timing after CIF.” The Firehawks left for YU less than 12 hours after their loss to Milken at Crespi Carmelite High School in Encino.

But Coach Coleman, Head of School Rabbi Ari Segal and Principal Reb Noam Weissman all agreed they should go, as did senior and co-captain Edan Sokol.

Senior and co-captain Edan Sokol explained as well that he would have preferred to participate in state competition, to ultimately play more basketball after Sarachek. However, he supported what the Firehawks did.

“It was already too late when we found out we couldn’t,” said Edan, who would have preferred the CIF contests partly to play more games. “They told us the day before like what we would rather do. But all of our families put in tickets and we already had our flight, so there’s not much you can do.”

Edan also mentioned the importance of Sarachek to the community.

“Of course the entire season isn’t dedicated to Sarachek, but Sarachek is also up there as one of our goals to win during the season, and I feel like it would have been kind of disappointing not to go,” Asher said.

Even though the Firehawks play in Division 4A, they qualified for the state tournament in Division 5 – one level lower, since they lost in the sectional championship game to Milken on March 1.

Playing a level lower makes it easier to win. Shalhevet was replaced by Notre Dame High School of Riverside, one of the semi-finalists at the sectional level. Notre Dame, which lost in Division 4A, made it all the way to the Southern California Regional Final in Division 5 before losing by one point to Rolling Hills Prep.

But the CIF’s Mr. Simmons explained that the Firehawks would have broken Bylaw 600 if they had been allowed to compete.

“The high school season of sport in the sport of basketball is until the end of the state championships,” he said. “All of the players who played in New York would have been ineligible players because they would have participated in an outside sport, an outside team, during that season of sport, which… does not end until March 25.”

If the Firehawks had won the championship against Milken and participated in Sarachek, then they would have had to give away the championship, and no victor would have been crowned in Division 4A Southern Section this year, Mr. Simmons said.

“Let’s say they actually won the CIF Southern Section Championship against Milken and then they played this tournament,” Mr. Simmons said. “They would have had to forfeit the championship, because at that point they would have had ineligible players.”

At Sarachek, the Firehawks came up short. After winning two straight games against Katz of Boca Raton and Heschel of New York City, Shalhevet lost to the Frisch Cougars of Paramus, N.J., in the championship game, 49-47 – the same margin as their loss to the Milken Wildcats.

Milken meanwhile lost in state competition, falling 70 – 57 to West High School of Torrance March 8 for the 4A crown.

Milken’s coach Michael Whiting thought Shalhevet would have done well. After defeating them March 1, he praised the Firehawks and predicted success at state – not knowing that they would not be able to participate.

“This is disappointing,” said Coach Whiting said of the Firehawks’ feelings that night. “But they’re going to do some damage in the state playoffs. They’re just too good of a team.”