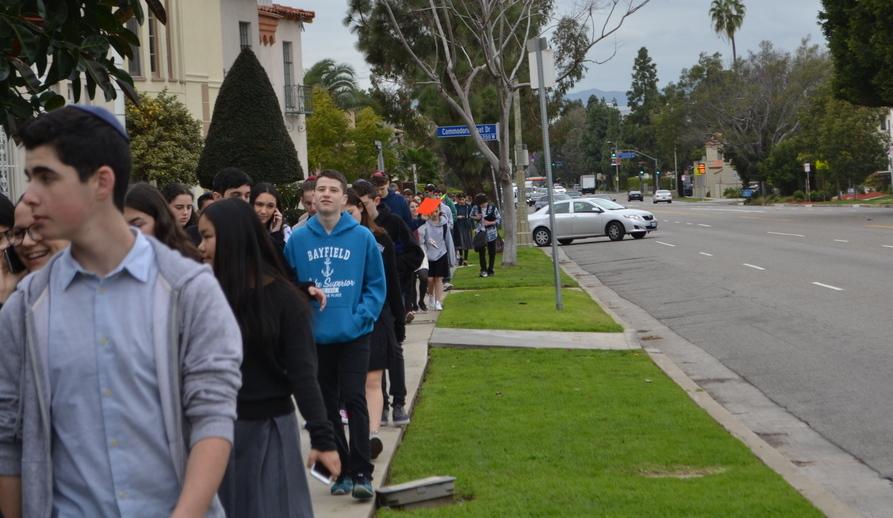 MARCH: Students from Milken, De Toledo and YULA Girls high schools joined Shalhevet for the 30-minute walk down Olympic Boulevard to school today, after a morning of prayer and community service projects in opposition to Westboro Baptist Church.

The alternative event was planned by Shalhevet faculty and lasted about three hours.

Milken junior Yoni Ben-Naim said he loved the experience and that it had been important to attend.

“We get to see each other here and make something good out of this – that it was supposed to be hatred, and what we’re getting out of it is love and kindness,” said Yoni.

In addition to Milken, students came from De Toledo in West Hills and YULA Girls High School, whose “Witnesses of Witnesses” Holocaust course came as a class. Milken and De Toledo students were given an excused absence if they volunteered to participate.

Shalhevet principal Reb Noam Weissman said Milken and De Toledo both approached Shalhevet asking if they could be involved. He said Shalhevet reached out to YULA, and that YULA Girls responded.

Students started off the morning at 8 a.m. with davening filled with singing and dancing. By coincidence, it was Rosh Chodesh Adar, meaning there were extra prayers and celebrations.

Josh Raikin, a senior and student body president of De Toledo High School, said that his favorite part of the event was “the atmosphere and Jewish pride.”

“Here, there was a lot of ruach,” or spirit, said Josh, “and you really felt that. And the community gathering together – sure we all go to Jewish day schools… but when we all come together… it’s really a unique, special feeling.”

After davening, everyone ate breakfast provided by Shalhevet and sat down for a half-hour of learning. They learned about the source and reasoning behind mishloach manot, the commandment on Purim to send food to your friends.

After the learning, the students wrote letters to veterans and packed Shabbat kits for patients at Cedars-Sinai Medical Center.

Yoni explained why he loved the chesed, or service, so much.

“Obviously what the rabbi was talking about, just bringing us together in this time of hatred and bringing love out of it,” Yoni said.

After the chesed, the students walked for about half an hour down Olympic Boulevard from Beth Jacob to Shalhevet. They sang and danced the whole way.

For a lot of students, the walk was the best part of the morning.

“The walk was pretty sick,” said sophomore Yakir Kanefsky. “It was nice just being [unified] with a bunch of different Jews just walking.”

Yakir also thought it was important that the community was pushing back against the protesters.

YULA junior Rebecca Masliah also enjoyed the walk and the feeling of unity.

“The best part was just seeing a bunch of schools come together and walking together as one group of people, one Jewish group,” said Rebecca.

Shalhevet sophomore Sadie Toczeck thought that it was especially important that the event was non-confrontational and peaceful.

“We didn’t combat hate with even more hate and counter-protests,” said Sadie. “We centered around community and we all got together and did a march and it was really powerful to see that love always wins in the end.”

Reb Weissman called the event “wildly successful,” and said that he loved the fact that students from four different schools were able to come together.

“The goal was to be marbeh shalom ahava v’re’ut,” or increasing peace, love and friendship, said Reb Weissman, “because that’s what Purim is about. We did a lot of work and it was incredibly worth it.

“Seeing De Toledo join and Milken join and YULA Girls join and to see the Shalhevet students come in droves to be davening together, to be learning together, to do chesed together and walk together – that’s being am echad [one nation]. And if that’s the goal of the event, then I think we absolutely succeeded.” 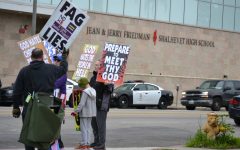