Lucy Fried will spend next semester studying in Israel, and Agenda gave Fairness the option of choosing her successor. 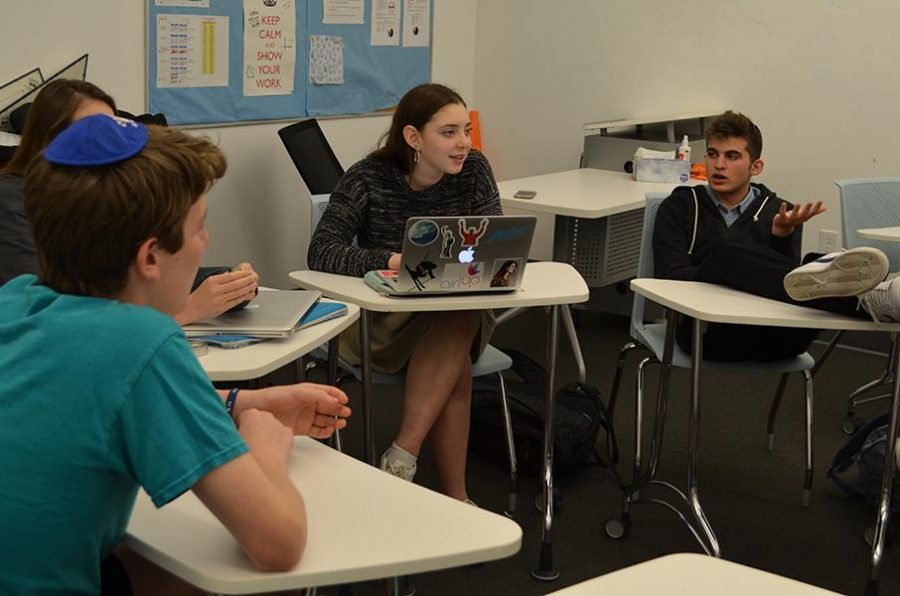 LEAVING: Agenda Secretary Lucy Fried, second from right, listened Jan. 16 as the committee discussed how to replace her for second semester. Lucy announced last Friday that she would be spending spring semester in Israel, setting off a constitutional crisis as to how to replace her.

The Agenda Committee decided yesterday to ask the Fairness Committee for advice about how to fill the vacant position of Agenda Secretary,  after current Secretary Lucy Fried announced that she would be studying in Israel next semester and would not be available to serve.

“If we bring it to the entire school, that’s a lot of planning and it’s distracting from something that’s really important,” said Agenda Chair Bennett Schneier during the meeting. “It requires ballots, anonymity, and the voting stations.”

He said later that speed was should also be a consideration.

“We need a quick fix, and the process of electing someone democratically is logistically difficult,” Bennett told the Boiling Point. “I think that we should take care of this issue in the most expedient way.”

Today, Fairness co-chair Alex Reich said Mr. Feld gave her four options regarding the matter. Two involved the Fairness Committee picking a replacement — either Talia Gill, who was the runner-up for the position to Lucy, or Rosie Wolkind, who was Secretary last year.

Fairness could also call on the Agenda Committee to pick a replacement for Lucy, or hold a special election, presumably during a Town Hall slot.

“I think it’s definitely worthwhile to have Agenda and Fairness working together, because that’s the way it was intended to be,” said Alex.  “So finally for us to start doing that again would be very valuable, and if they’re asking for our help, why would we deny it?”

However, she said the Fairness committee had not officially agreed to take the case. The committee has not met yet, although Alex said she hopes to meet about it some time this week.

At the start of the Agenda meeting, which took place in Room 216, committee adviser and Dean of Students Mr. Jason Feld offered various options for filling the vacancy.  One was a school-wide vote in a special mid-year election.  Another was having himself and the Agenda officers choose someone, and another was to ask the Fairness Committee to decide what they should do. Mr. Feld said that asking Fairness for guidance “might be the best option.”

Talia Gill, currently serving as a sophomore representative, agreed, and then Agenda Chair Bennett Schneier said that using the Fairness Committee would be simplest.

I think it’s definitely worthwhile to have Agenda and Fairness working together, because that’s the way it was intended to be.”

Bennett also said choosing someone from within Agenda would have caused other problems.

“Electing someone within the committee could ultimately be counterproductive; it may become contentious, there may be hurt feelings,” Bennett told The Boiling Point. “There’s no precedence to this, so there will be people who ask ‘Why don’t I get to run?’”

Lucy, a sophomore, decided last Friday, Jan. 13, to spend spring semester on Camp Ramah’s study abroad program, called TRY for Tichon Ramah Yerushalayim. She will take courses at the Ramah Jerusalem High School and live in a dorm on campus.

The only opposition to letting Fairness possibly decide came from senior representative Alec Fields, who came late to the meeting because he was taking his Math final. By the time he got to the meeting, it had been decided.

“It doesn’t make sense to me why we would bring such an important matter to a select few individuals rather than the Community at large [where] everyone can have the opportunity to voice their opinions,” Alec said in an interview later.

“It is irresponsible for us as the Agenda committee to simply give the problem over to Fairness in the hopes that they will solve it,” said Alec. “It is not democratic for us to give to those select few, rather than bringing it to the entire community.”

Under the school constitution, the Fairness Committee meets in secret and provides no minutes concerning its deliberations.

Asked whether the meetings might be public this time since the Secretary post is a schoolwide office, Alex said she could not comment because the committee had not yet met about the case.