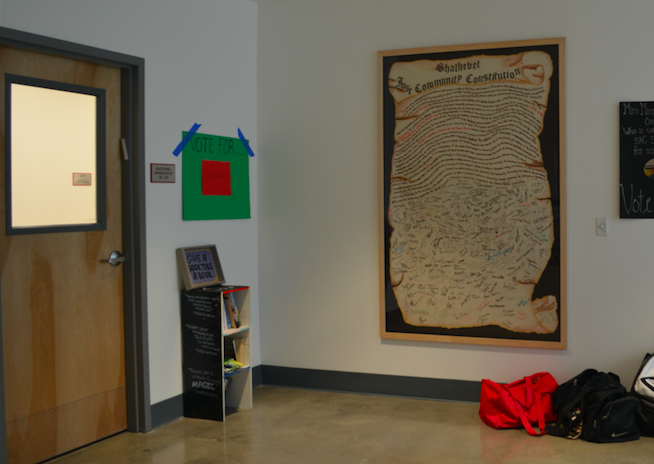 ABRIDGED: The Just Community Constitution that hangs outside second-floor administrative offices contains less than a third of the original document. (Gaby Benelyahu)

ABRIDGED: The Just Community Constitution that hangs outside second-floor administrative offices contains less than a third of the original document.

School constitution is found, envisioning a democracy similar and different

Agenda chair must be a senior and faculty members should be elected to committees, but halacha, curriculum and law are still beyond the reach of school democracy, document says

After a two-week search, Shalhevet’s original Just Community Constitution has been found, and it describes a school democracy both similar to and different from the one practiced at school today.

The document, at seven pages, six articles and 34 subparagraphs, is much longer than the one-and-a-half-page section that was memorialized in a wall-hanging and signed by all students in 2002.

That section, which is displayed outside of the second-floor administration offices, contains just the first section of the first article of the constitution. It also appears on TheJustCommunity.com, the website of the Agenda and Fairness committees.

Earlier this month, a sophomore — Rosie Wolkind — entered the race for next year’s Agenda Chair, sparking controversy over whether it was okay for a non-senior to hold that post. The Boiling Point contacted current and former faculty members, administrators and Agenda chairs, hoping to find the rest of the document.

But no one could find Shalhevet’s governing document until yesterday afternoon, when former General Studies Principal and Director of Moral Education Dr. Samuel Gomberg emailed it to the Boiling Point.

The question about Rosie’s candidacy – at least under the original constitution – was answered in Article 1, section 1.02.

Last Friday, junior Bennett Schneier – who will be a senior next year — was elected to the post from a field of four candidates, including Rosie.

A review of the original constitution reveals that some things have remained the same over the years while others are different. Perhaps the most often cited rule – that school democracy cannot take on matters of curriculum, halacha or current law — is exactly the same.

On the other hand, the constitution states that both the Agenda and Fairness committees are required to meet once every five school days. Today only the Agenda Committee has regular meetings.

Also, both committees should have two elected faculty representatives in addition to their advisers. Today they have advisers who are appointed by the administration, and no elected representatives of the faculty.

Here are some other highlights of the original constitution.

Limits of the school democracy. This portion of the constitution, cited regularly by Shalhevet’s administration still today, is practiced exactly as written in the Constitution, which states:

“The jurisdiction of the Shalhevet Democratic Just Community does not include the domains of curriculum, halacha, and local, state and federal law.”

Town Hall. Town Hall today looks pretty much the same as it did under the constitution, complete with the smaller “community forums” that were held this year for Just Community Orientation.  It should be led by the Agenda chair or someone he or she designates, and it should choose the Town Hall topic.

One difference is however is what happens when the Agenda Committee wants to set a topic for discussion and the administration refuses.  If that happens, a committee called the Judicial Review Committee should meet to decide.

The Judicial Review committee is supposed to be comprised of two students, two faculty members and the head of school, but there is no such committee today.

Agenda Committee. According to the constitution, the Agenda Committee has other obligations aside from simply planning Town Hall, including informing community members of the expected proceedings the day before Town Hall meets.

A file cabinet with notes from all Agenda meetings is also required — something that would have helped when Rosie asked whether she could run.

Today the notes are kept on Google docs, but old records are still missing.  For example, an amendment passed in 2010 appears in a Boiling Point story, but no one in Shalhevet’s current administration or on the Agenda Committee knew about it until told by newspaper staff.

The Agenda Committee is also supposed to maintain an announcement board in the hallway and post debated topics and proposals. Today such information is maintained on TheJustCommunity.com.

And while a required introduction to the Town Hall discussion still takes place, Town Hall meetings are not “structured and governed based upon “Robert’s Rules of Order,’” as required by section 1.03.

Fairness. The Fairness Committee still holds the contents of cases private as is dictated in section 2.02 of the original constitution. But several policies are different.

Also, for what many believed was the first time, this year a Fairness Committee secretary position was added to the ballot. However, Section 2.02 states that the committee should self-appoint a secretary from among the elected representatives.

Teacher representation on committees. Another major difference between the original system and what we have today is that there used to be two teachers on committees,

Additional committees. In addition to the Judicial Review Committee, the constitution creates a Constructive Consequences Committee, which also does not currently exist.

According to Section 3.01, the Constructive Consequences Committee sets penalties for violations of the constitution.

The Constructive Consequences Committee is supposed to “allow a group of community representatives to assign just and constructive punishments to members of the community who act in violation of the Rights clause of the Constitution,” and is not presently constituted.

Miscellaneous. According to the constitution, various committee chairs are supposed to meet monthly with each other and the administration to discuss current affairs.

An official cross-committee meeting has not occurred in past years, but earlier this year the Agenda Committee, Fairness Committee and Student Activities Committee held a joint meeting to discuss issues among the committees.

Even though a lot of the Just Community is different today, several practices remain in place.

Town Hall is still held every week and students are able to present proposals which go through the Agenda Committee. Community members are also still able to take Fairness cases when they believe it is necessary.

“Well certainly it’s important to know the intended values of the constitution,” Bennett said in an interview before he had had a chance to read the original document.

“But I think the school has progressed so much over time it’s not so much a question of black or white, whether we should discard it or keep it. It’s more about keeping the foundation, the basic tenets, but revising them and modifying them so that it best suits the school now.”