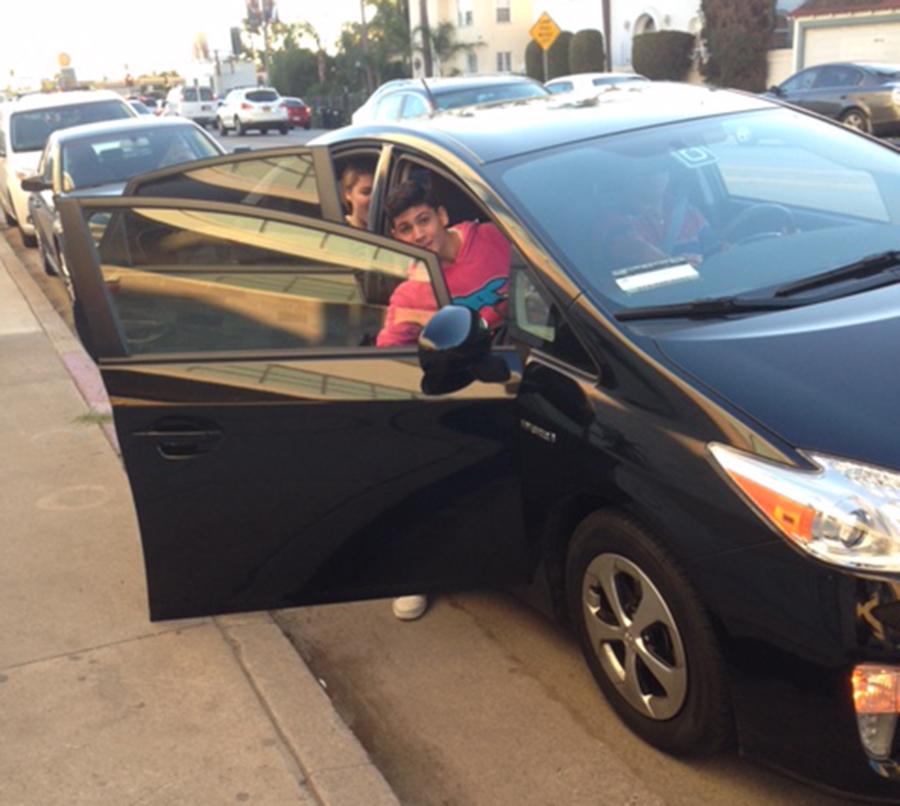 CON: Ubers are no longer permitted in the school parking lot, so carpool line is only parents and friends. (BP photo by: Dana Alkoby )

CON: Ubers are no longer permitted in the school parking lot, so carpool line is only parents and friends.

Exiting Shalhevet onto Fairfax, a group of students can be seen daily waiting not for their parents to pick them up, but for Ubers, a trendy and convenient method of going to and from school.

Many are becoming increasingly reliant on the six-year-old, $50 billion startup comapny for transportation. Lacking a diver’s license or a car and if their parents are busy, students can simply press a few buttons on a smartphone and an Uber will arrive right outside the school. The ride can be inexpensive, social and sometimes even a memorable experience.

An issue, however, is that minors are breaking a contract every time they Uber without an adult.

“I violate it every time I take an Uber — sue me,” said senior Daniel Soroudi. “I’m not gonna change what I do because come on, that’s a rule just for the sake of being a rule. It’s not enforced at all. I think it’s almost only upsides. You essentially get to talk to every type of person out there.”

Students opt to take Ubers for a variety of reasons, as their reliance upon it ranges from convenience to absolute necessity. Not everyone enjoys it.

Sophomore Gail Harrison stated that she only takes an Uber if she has no alternative mode of transportation.

“I feel really uncomfortable in Ubers,” said Gail. “It is some random person I don’t know driving me around,  [though] if my parents cannot drive me somewhere, I will take an Uber.”

While some use Uber because they don’t have any other ride, many truly enjoy the experience and find the encounter positive.  For senior Asher Sebban, taking an Uber can mean extra sleep, because he doesn’t have to ride with his siblings who go to school earlier and farther from home.

Uber is not unionized and has therefore been able to offer rides at a much lower cost than traditional taxis. Taxi companies, which have been hurt by the competition, cite Uber’s transporting kids as one of their many complaints.

Interviews with several attorneys and extensive internet search by The Boiling Point could not find any state law prohibiting taxis from transporting children.  But in contracts – of taxi companies as well as Uber — the restriction on minors is very explicit.

“The Company cares about the safety of children,” the company states. “Because our Services are not directed toward minors, no one under 18 are allowed to register with or use the Services.”

That means students who call and ride in Ubers are violating the contract. Students interviewed said they hadn’t read the fine print.

But they said the would still use Uber because of its many benefits, citing benefits including budgeting, being able to manage time through quick transactions, and its constant availability.

“What I love about Uber is you can see where your car is, how far away they are, [and] if they get lost you can track the car,” said English teacher Ms. Na’amit Nagel.

Ms. Nagel considers Uber safe because of the “star” rating system that comes with each offered ride.

“You know how many stars [the drivers] have, so you can turn people down,” she said. “It’s also good that you can send your E.T.A. to a family member so they can follow you, and [for children] your parents can actually follow your car. In certain ways it’s safer than taxis because you can be monitored.”

“Uber is so cheap that it’s almost as much as gas would cost,” Daniel said. “The amount of time saved for everyone else makes it definitely worth it.”

Nonetheless, the discomfort and danger of being driven around by a stranger is a pivotal concern of many who have ridden in Ubers.

“The downside is that sometimes it takes too long to find an uber in the area,” Asher said. “Then, the Uber sometimes is late or is waiting in the wrong location or makes a wrong turn. It’s also uncomfortable to sit in a car with a person you’ve never met before right after you wake up in the morning, or after a long day at school.”

“I would feel more comfortable if it was a woman driving, but I’ve never actually had a woman Uber driver,”  Gail said.

But nationwide, only two percent of all taxi drivers are female, according to International Women’s Day magazine, meaning a female driver is much more likely to be driving an Uber than a cab.

Websites associated with the taxi industry publicize assault accusations against Uber drivers, while news media and social media report on passengers attacking drivers.  A spokesman for the Taxicab, Limousine and Paratransit Association described some of the differences between Ubers and taxis.

“A taxicab company has to meet a certain threshold of regulations,” spokesman John Boit told the Washington Post. “Those regulations cost money. Of course the industry is concerned that other companies are allowed to come in and not play by any of the rules that the taxi industry has had to abide by for decades.”

“I would feel more comfortable if it was a woman driving, but I’ve never actually had a woman Uber driver,” Gail said.

But nationwide, only 2 percent of all taxi drivers are female, according to International Women’s Day magazine, meaning a female driver is much more likely to be driving an Uber than a cab.

Students said most Uber drivers, however, are friendly and many enjoy their encounters with them.

Among Asher’s many Uber drives he has had was an “accent-off” with a impressionist and a “stand-up comedy routine stand-off” with a stand-up comedian, though his conversations have turned serious at times, with a debate about Iran and the Middle East with a foreign driver. He also once met an aspiring musician and kept in contact to possibly collaborate.

Ms. Nagel once met a fellow English professor who became an Uber driver to find inspiration and material for a novel by meeting new people and having conversations.

When the Shalhevet administration learned that students are not supposed to Uber without a parent, their reaction to this previously unknown information was to research it.

Just last year, the school had sent some kids in Ubers from the JCC to B’nai David and Young Israel of Century City during a heat wave, when classes were meeting in various synagogues and students needed to get from one to the other.

Registrar Lili Einalhori took immediate action after learning about the contract  language, which could leave the school liable if there was an accident.

“I was not aware of it and I think the administration themselves were not aware of this,” Ms. Einalhori said. “So what we did is, now we have instructed our security booth that no Uber car can pick up or drop off in our lot – even if they are picking up an adult, because we are not going to question it, we are just going to not allow them on site. They will have to be picked up outside.”

She said there would be an exception for staff member Daniel Schwartz, who is over 18 and physically disabled.

This story won Second Prize for News Writing in the 2016 national Gold Circle awards from the Columbia Scholastic Press Association. 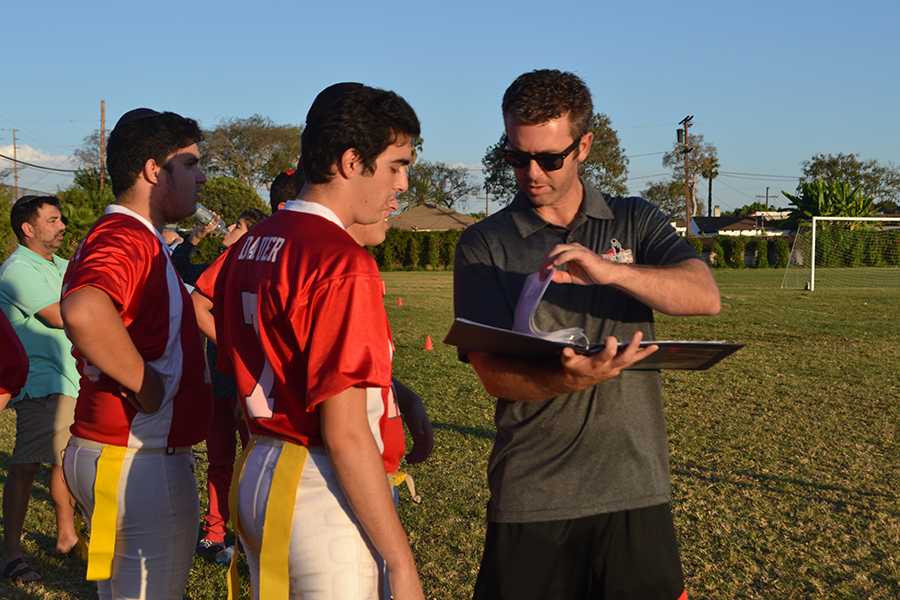 Football One coach plus three teams equals plenty of victor… 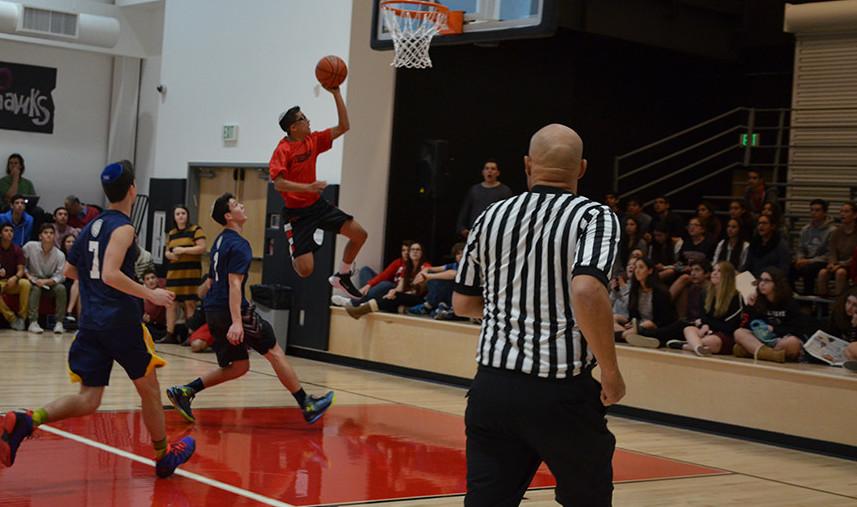