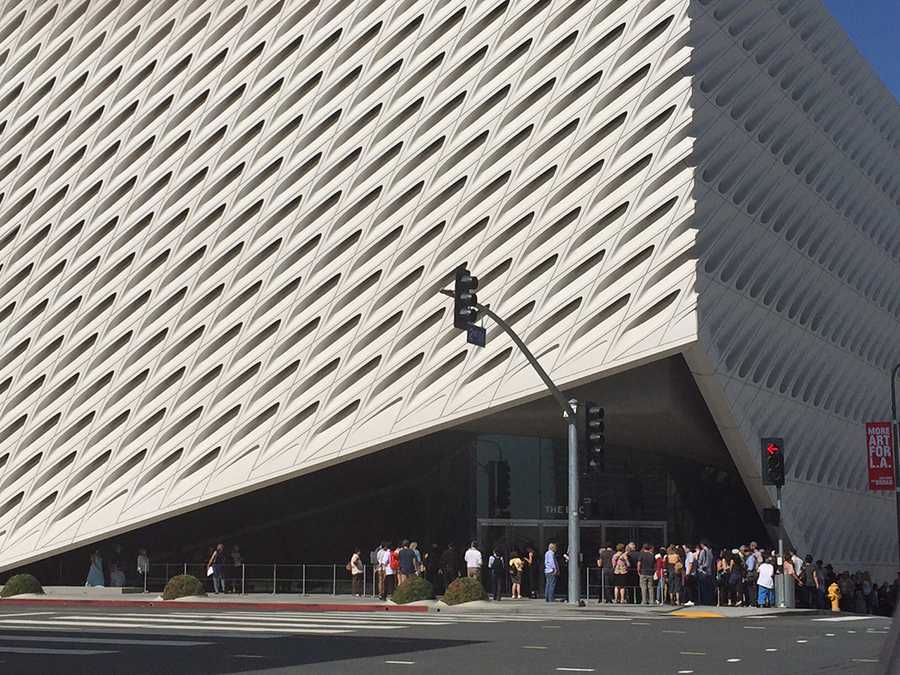 MODERN: The new Broad Museum houses some 2,000 20th- and 21st-century art works from the collection of Eli and Edythe Broad. (BP Photo by Hannah Jannol)

MODERN: The new Broad Museum houses some 2,000 20th- and 21st-century art works from the collection of Eli and Edythe Broad.

On Bunker Hill, another art museum and another Broad

At 10:30 a.m., half an hour before the doors open, a line of 200 ticketholders and a standby line of 60 walk-ins braves the L.A. heat to see the newest addition to the city’s arts scene, The Broad museum, which opened Sept. 20 on a corner across the street from the Walt Disney Concert Hall, Dorothy Chandler Pavilion, the Colburn School, and MOCA.

Eli and Edythe Broad’s newest institution – the second modern art pavilion in Los Angeles to bear their name – still sees 200 people with tickets per half-hour time slot, along with hundreds more who come in through the standby line. Despite the surplus of visitors, the wait for the “walk-in” line is usually no more than 20 minutes, and access should be easier later in the year.

From the outside, the building is a futuristic white “veil,” which is opaque aside from a single eye-like glass window the museum is calling an “oculus.” The oculus lets light into “Oculus Hall,” which will be used for different events and speakers.

Inside, an assortment by 200 different artists is presented on the first and third floors for viewing. The second floor, called “the vault,” holds works that will eventually will be put out on view in a rotation..

The comfortable, air-conditioned interior of the building is quite a contrast with the hot, sweaty, crowded lines outside. The lobby is a kind of cave — soft, gray plastered walls have no corners, and create a calm allure to the entrance.

Guests are greeted by a legion of curators happy to answer all or any questions. The Broad museum’s app — “The Broad” — is easy to download with the free Wifi offered to all visitors.

To the immediate left is one of the museum’s more popular pieces, Yayoi Kusama’s Infinity Mirrored Room. Punch your phone number into a screen and receive a text with a designated time to come down to wait in a quick line for entry.

Sure enough, the walls are all mirrors, which infinitely reflect one another with dozens of multi-colored LED lights hanging from the ceiling. Each viewer has 45 seconds to stand alone on a small “dock” at the front of the space, careful not to step out onto the rest of the floor, which is covered in a layer of ankle-deep water, which also reflects the LED lights. The room is a small simulation of being in cosmic, infinite and transcendent space.

If you want to catch this planetary experience, come before 2 PM. The machine has a limit, which for the past few weeks has been reached by early afternoon.

Past this installation are the first few of the museum’s exhibit rooms, this one containing most of the modern pieces, ranging from the 1980’s to the early 21st century. These rooms represent a conclusion to the chronological pictorial history of American culture from the middle of the 20th century to 2015, which the museum accomplishes.

At their entrance is a quote from Eli Broad: “I like the fact that art reflects what’s happening in the world, how artists see the world”  — a good summary of the collection.

The museum’s more prestigious works appear after a ride up a glass cylinder elevator, or a trek up stairs in a gray, dimly-lit tunnel.

The light at the end of the tunnel is the building’s third floor, which going from left to right presents an artistic history of the U.S., beginning in the 1950s and ‘60s and ending with pieces from this year at the far right side of the top of the museum. Originals of iconic art pieces such as Andy Warhol’s Campbell’s soup cans, Marilyn Monroe and Elvis commence the aesthetic journey through America post-World War II.

In the next room are canvas paintings and drawings by Edward Ruscha. Boss, 1961, is totally timeless despite being a commentary on a colloquial trend of the ‘50s of people saying things are “boss” when they’re cool. Millennials were squatting in front of the painting last month in commanding poses and facial expressions, noting how much of “a boss” they are for their social media followers.

In the middle of the third floor is Tulips, 1999-2004, by Jeff Koons. Shipped in from Germany, the 205-inch piece is the focal point of a large room which addresses America’s political climate.

Visitors can take some of these works home on prints or T-shirts, available for purchase at purchase in the museum’s gift shop on the first floor.  A t-shirt with Untitled (Your body is a battleground), 1989 by Barbara Kruger, costs $30, and posters range from $10 to $35.

In addition to the building and the art, the Broads provided an underground three-level parking structure, where $12 gets three hours at the museum on weekdays, and the entire day on weekends, with validation of course.

Public transportation from Beverlywood or Pico-Robertson is also a viable option. Metro light rail will take you from Roberston and Venice to where you can get a quick cross-town bus to the museum. Even easier, the LA Metro No. 728 bus goes to downtown LA with stops nearby.

The Broad Museum will no doubt attract many art lovers for years to come. Its location puts it at the nexus of the city’s most important cultural institutions — an area that is especially familiar to any Shalhevet student who has taken Ms. Joelle Keene’s Music Appreciation class. All the historic Bunker Hill sights featured in her unit on the urban renewal of downtown can be found near The Broad, which will likely be added to her curriculum.

The new Broad Museum is not the Broads’ first contribution to the arts and probably won’t be the last.

According to Forbes, Eli Broad is among the 200 most wealthy people in the US.. With millions earned heading two Fortune 500 companies, he has created his own foundation while also generously supporting LA Opera, MOCA, Disney Hall and the Colburn School, as well as Jewish causes.

Born to Jewish immigrants from Lithuania, Mr. Broad embodies a rags-to-riches story that turns from being the CEO of the two Fortune 500 companies — KB Homes and SunAmerica — to retiring in his 60s to a career of what he calls “venture philanthropy.”

He and his wife, Edythe, have been married for 57 years and formed their foundation in the 1960s.

“In the arts, it’s trying to get a much bigger audience. [We] try to educate a broad public on what the arts mean and how they fit in society. So we don’t just write checks –we work hard at it.”

Aside from basically creating the LA art scene, he has also donated to the American Jewish Committee, American Friends of the Israel Philharmonic, Anti-Defamation League and B’nai B’rith, and gave a $100,000 grant to Friends of Israel Arts.