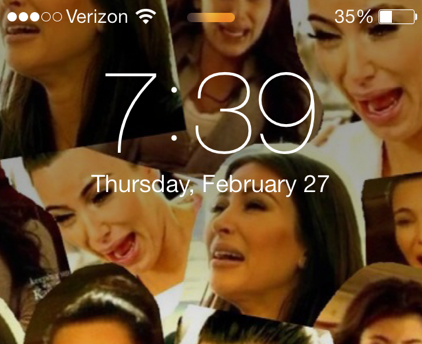 FIRST-WORLD PROBLEMS: Every time she looks at her phone, senior Melissa Ohana sees an abundance of crying Kims. ( COURTESY OF MELISSA OHANA)

FIRST-WORLD PROBLEMS: Every time she looks at her phone, senior Melissa Ohana sees an abundance of crying Kims.

Celebrities seem to be a constant presence in students' lives -- but how much influence do they really have?

Celebrity culture has hit Shalhevet and hit it hard. Take a walk around the half-school and annex and you’ll notice that Shalhevet is home to, arguably, the most fashionable students.

But it’s not the rabbis who are setting the trends.  It’s Hollywood.

Take, for example, senior Yarden Harel, whose Macklemore-inspired haircut is all the rage. This glorified bowl cut involves shorter length sides and longer length hair on the top.

“I saw the haircut on Macklemore, who has similar coloring to me, and I thought it was pretty cool,” said Yarden. “If he could do it, then so could I. So I got it myself.”

Senior Josh Einalhori and even staff member Ivan Donadic don the same happening haircut, but with a slightly more intense buzz cut on the sides.

“Living in Los Angeles with three sisters makes it a necessity for me to keep up with what’s new,” said Josh.  “A year ago my sister asked me to get this haircut so I got it.”

Celebrity trends extend further than just hairstyles, however. Most at Shalhevet blend celebrity fashion with modesty in their everyday school outfits. And students also follow trends that are characteristic of less edifying societal habits, sometimes thinking about the implications and sometimes not.

When juniors Jillian Einalhori and Sara Sobolev found a foam finger at school one Friday, they decided it would be fun to don some “Miley buns” and mimic the singer’s appearance during her infamous VMA performance from last year.

“I thought it would be funny,” said Jillian.  “We love her. We think she’s so funny, really crazy…. I obviously I don’t want to be as crazy and psychotic as she is, but I slightly admire her because she really doesn’t care sometimes, I think that’s good, to sometimes just do what you want.”

“When I want to keep it elegant and sweet, I go to Lauren Conrad or Ariana Grande’s instagrams because they always look classy and it’s easy to find what they’re wearing in stores,” said sophomore Dorelle Nahmany.  “However, if I want something with more of an edgy look, I turn to Kylie Jenner’s Instagram.”

Students like Dorelle turn to celebrities for creative style because they admire what and how they wear things.

“I practically idolize Kim Kardashian,” said senior Melissa Ohana, who follows the reality TV star’s trend of crop tops over high-rise pencil skirts.  “I like a lot of the stuff she wears. She is very fashionable and always knows what to wear.”

Some male students find that celebrities have a big impact on their wardrobe as well. Sophomore Micah Gill draws inspiration from many male celebrities, specifically Dwayne Wade. Wade’s dynamic style is something Micah looks up to.

“He has a dynamic style in a profession dominated by masculinity,” says Micah. “He has his own fashion line and even though it may only be for a press conference, he makes sure to be impeccably dressed.”

While many take pride in their celeb-inspired threads, there are a few students who disagree with the celebrity-worship mentality. Freshman Dana Alkoby believes that students shouldn’t just wear the first thing they see on a big-name somebody.

“To be honest, I really don’t care about what celebrities are wearing,” says Dana. “I just buy whatever I like and whatever is comfortable and I wear it.”

Love it or hate it, celebrity culture runs rampant among teenagers – especially because in the age of mass media, stars and wannabe stars of all stripes are a steady presence, from TV and Twitter to websites and billboards.

Why is it that stars have this capacity to influence? When stars become people’s role models, people strive to become everything that a celebrity is.

“People copy stars because of the star’s specific occupation,” said senior Yan Kligerman. “Some people believe that stars are their role models and that they can live their dreams through the stars they admire.”

While high regard toward celebrities plays a role in people’s need to worship them, celebrity culture sometimes doesn’t wane even when celebrities take a 180-degree turn.

“If Macklemore were to be tried for murder or something awful, I’d still keep my haircut,” said Yarden Harel. “It’s not like I’m supporting his every action just because I have his haircut, I just support his fashion sense.”

Does it matter at all how they behave?

When students follow a celebrity trend for the sole purpose of the trend’s aesthetically pleasing look, they have no problem continuing the trend even when the muse does something unforgivable. But if the student follows a trend because of a prior interest in and admiration for the celebrity, they might stop following that celeb.

“If Kim Kardashian were to do something absolutely absurd like, for example, incite hate-crime, I would not follow any of her trends anymore,” said Melissa Ohana. “It’s ridiculous to look up to someone who does something really awful.”

Meanwhile, not all celebrities are created equal – at least as far as copying them goes. When asked, no students said they’d follow trends set by a political figure. Hillary Clinton can seriously rock a pant-suit, but Shalhevet students tend to stray away from more professional looks.

Student mimicry may also depend on the amount of exposure they have to a certain person. While political figures take the spotlight often, celebrities seem to always be the center of media’s attention.

“It might have something to do with how often people see celebrities on TV or in ads or in concert, as opposed to political figures who may not get as much air time,” said Benny.

And of course, many students draw inspiration from places other than Hollywood. For example, their siblings and classmates.

“I’ve never really looked at celebrities for guidance on my outfit,” says Benny. “Most of my reference is just from what I see other people wearing around me.

“For example, when people started wearing skinny-slim straight jeans, I followed up, and when they started wearing those jeans in different colors, I just went ahead and did the same.”

Dana Alkoby looks up to her sister’s style.

“When I see something that I like that she wears, I wear something similar,” says freshman Dana Alkoby.

In Los Angeles, where celebrity culture is magnified by the proximity to it, a teenager with a Macklemore-esque haircut or a Kim K-style outfit is not hard to come by.  Just like most teens, Shalhevet students are susceptible to celeb trend-following – both the good ones and the bad.

But for Jillian — and perhaps others — mimicking a signature style does not mean she’ll start acting like that celebrity all the time.

“I’m not going to be crazy, twerking on a stage,” she said.  “But [Miley] has a lot of fun with her life and I love her music.  And I think sometimes it’s good to just do what you want.”

Why loving Kimmy K. is not idol worship (probably)

Does idolizing a celebrity qualify as idol worship?

According to Judaic Studies teacher Rabbi David Stein, when there is no inherent value incopying a celebrity, one could potentially be violating the prohibition against following the ways of society.

“If Shalhevet students are doing something just to be like a certain celebrity, they are definitely treading on thin ice,” Rabbi Stein said.

“Even though they aren’t committing idolatry, there is definitely a corollary to idol worship, because of the prohibition that tells us not to follow in the ways of the pagans.”

However, he continued to say that simply being inspired by someone’s style, or dressing in a contemporary fashion — while remaining modest — is not a violation of the prohibition.

Idolatry in the Torah, based on the Second Commandment, is referred to as avoda zara, which means foreign worship of a god that is not God.

Rabbi Stein believes that there is a certain point at which worshipping a celebrity violates this, but that students are not likely to reach it.

“I don’t think any of the copy-cat thing at school is anyone thinking this celebrity is actually God,” Rabbi Stein said. “One could potentially violate a commandment worshipping Kim Kardashian but they have to actually see her as a God and start a religion saying Kim Kardashian is a savior.”

“Worshipping secular culture certainly does not qualify as an actual violation of idolatry,” said Rabbi Schwarzberg. “I think it is important to distinguish between being heavily influenced by something and calling it worship.”

Still, he said, there might be spiritual consequences to idolizing celebrities.

“I do think that if these influences begin to replace more meaningful influences and become distractions from more important values, then they become highly problematic,” Rabbi Schwarzberg said.

Some believe that though idolizing a celebrity is not actual idolatry, it opens a gate to violating the prohibition.

“People are obsessing over a celebrity who has done nothing but the materialistic,” said senior Yosef Nemanpour, “and I think that can definitely lead toavoda zara.”

But Rabbi Stein pointed out that celebrities do good things, too.

“We have to constantly be asking ourselves about the good things that celebrities do and appreciate that,” said Rabbi Stein. “We have to be cognizant about our relationship with celebrities, and if they do something that falls in line with our value system than we can’t ignore that either.” 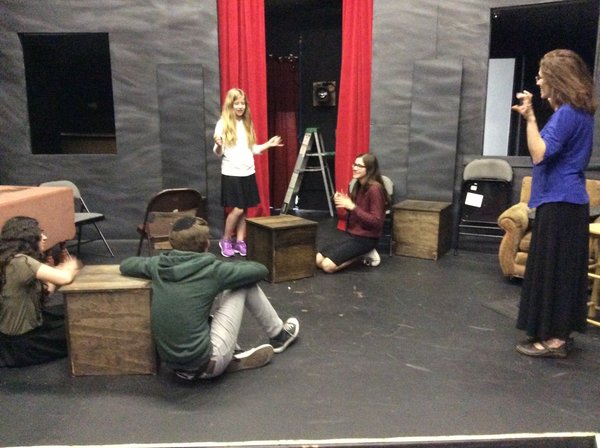