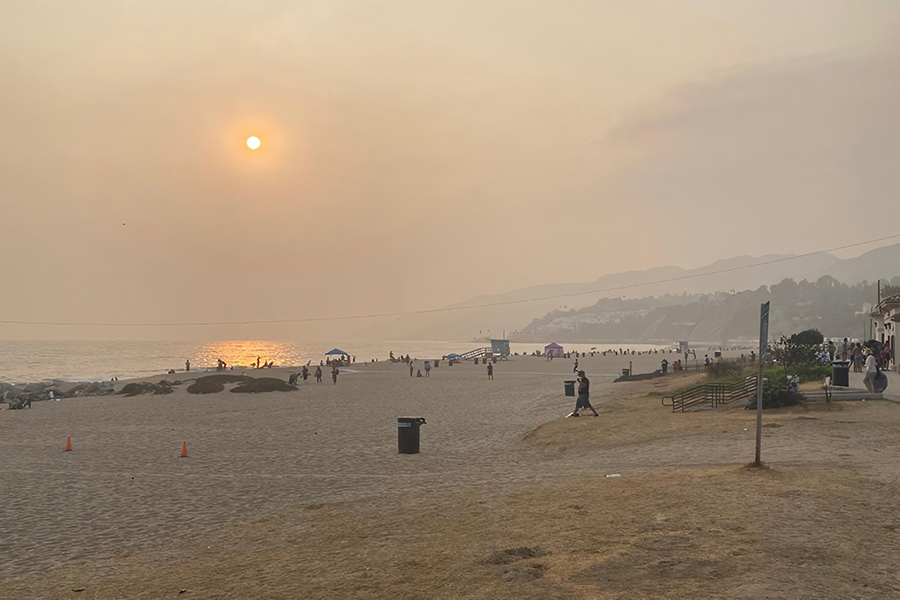 AIR: Smoke from fires as that ravaged the West Coast filled the skies Sept. 13, shrouding the sun at Will Rogers State Beach in the Pacific Palisades. The nearest fire was the Bobcat Fire in Pasadena, 29 miles away. (BP Photo by Ellie Orlanski)

AIR: Smoke from fires as that ravaged the West Coast filled the skies Sept. 13, shrouding the sun at Will Rogers State Beach in the Pacific Palisades. The nearest fire was the Bobcat Fire in Pasadena, 29 miles away.

Orange skies, cancelled activities as epic fires fill the air throughout the West

Fires raging throughout the West grew so large earlier this month that davening was cancelled and Camp Firehawks activities were moved indoors, as an orange-yellow haze replaced the season’s typical blue skies and made the air unhealthy for people throughout Los Angeles.

General Studies Principal Mr. Daniel Weslow cancelled outdoor sports, including soccer, baseball, cross country and biking, for the entire week beginning Sept. 13 as the local Air Quality Index (AQI) reached above 600, according to media reports. An AQI above 100 is considered unhealthy for sensitive groups, and above 150 is unhealthy for everyone.

Mr. Weslow announced via email Sept. 13 that the sports would expose students to unhealthy air.   This pollution resulted from hundreds of wildfires tearing across the West.

“As long as the Air Quality Index remains below 150,” Mr. Weslow wrote, “we will move parts of Camp Firehawks inside where feasible, but many parts of the program will likely remain primarily outdoors.”

He said officials had consulted Shalhevet’s Medical Task Force, which was formed last spring to help the school manage the spread of Covid-19.

“For particularly strenuous outdoor activities such as athletics, the Medical Task Force has recommended that the Air Quality Index must be below 100,” wrote Mr. Weslow in an email on September 13.

In-person davening on the third-floor turf was cancelled due to the poor air quality of Sept.16.

Things were much worse north of Los Angeles, as the blaze tore through small towns throughout the West and threatened many more. Fires in California alone have burned more than 3.9 million acres — more than 6,000 square miles, an area larger than the state of Connecticut — and destroyed over 7,200 structures, according to Cal Fire.

As of Sept. 30, 29 people had lost their lives in California and another 10 in Oregon,where 22 people are still missing. According to media reports, among those killed were a small child and two teenagers.

Teens also were helping to save lives. Josh Chertok, a senior at Tamalpais High School in Marin County, north of San Francisco, was involved in evacuating people from the Woodward Fire in Marin County, at the north end of the Golden Gate Bridge.

Josh volunteers with the Marin County sheriff’s office Search and Rescue Team.  Early in the fire season, he was part of a crew working to get people out of their homes.

“It smells like there’s a giant campfire under my nose when I go outside,” said Josh, who lives in Mill Valley, 10 miles away from the blaze. “Outside my house looks like heavy fog but it’s smoke. There’s ash in the air.”

In Southern California, the fires came later, and loss of forests and buildings was painful but less severe. Air quality in Los Angeles began to decline on Sept. 7 and worsened with the spread of the Bobcat Fire, located in the Angeles National Forest in mountains north of Pasadena.

About 4,000 residents of Pasadena-area suburbs including Sierra Madre and Monrovia received evacuation warnings on Sept. 8.  All had been lifted by Sept. 19, and no structures there were destroyed.

Noah Kronsburg, a sophomore at Pasadena High School who lives in Pasadena, was three miles from the flames.

“I can’t go outside because the levels of smoke has made the air nonbreathe-able,” said Noah, who is the cousin of Shalhevet students Benjamin and Joshua Gamson.

“I will open my window and immediately close it because I remember that the amount of smoke outside is so dangerous to my lungs.”

I can’t go outside because the levels of smoke has made the air nonbreathable. I will open my window and immediately close it because I remember that the amount of smoke outside is so dangerous to my lungs.”

He said his house was surrounded by fire on all sides, except for the front which faces toward downtown L.A.

“The way I would geographically explain it to you is that on all sides I think of it as a sukkah,” said Noah in an interview.  “Essentially on all sides, besides from [the front], I’m surrounded by the Angeles National Forest.”

Located near the Sierra Pelona and San Gabriel Mountains, the Bobcat Fire started on Sept. 6.  As of Sept. 29, it was 62% contained and had burned 114,202 acres, or about 180 square miles, according to the Los Angeles County Fire Department.

It was still blazing when Rosh Hashanah began on Friday night, Sept. 18.  That night there was also an earthquake, measuring 4.6 on the Richter scale, at 11:40 p.m.  The earthquake, which was felt by most Shalhevet students,  was centered just south of El Monte — 30 miles from school but only 18 miles away from Pasadena.

Rebbetzin Chani Hanoka, wife of Rabbi Chaim Hanoka of Chabad of Pasadena, said the holiday had helped people cope with both the fire and the earthquake.

“Between the fires, Covid-19, and the recent earthquake, things are starting to pile up on people,” Rebbetzin Hanoka said in an interview with the Boiling Point. “We are really close to the fault line, so we got a good jolt.

She said the air improved enough that outdoor services were held on both the first and second days of the chag.

“I think people were comforted because we had davening on Rosh Hashanah,” she said “Even if they didn’t come, they were comforted that we were here for the community. We made Rosh Hashanah packages and kept in touch with everybody, but it’s been hard.”

She said the Chabad was staying in touch with the members of the shul making sure they were ok. She said none had been ordered to evacuate, although some left of their own volition and fear of the bad air quality.

“No one had mandatory evacuations but there were people who the fire was less than a mile from their house,” said Rebbetzin Hanoka.

“We reach out to them, we kept in touch with them on a regular basis,” she said. “We’re just reaching out and keeping communication with everybody.”

At Shalhevet, the fires were less of a threat, though still frightening.

“We usually practice in the gym and work out on the roof, but when the air quality got bad we just practiced in the gym,” said freshman Yalee Schwartz, who practices with the girls basketball team.

“But when I had an outside session with my coach, it really affected me because I started to get headachey and it was hard to breathe. I got very tired and felt like there was a loss of oxygen.”

Senior Rena Harkham’s Model Congress practice was moved from the turf indoors, and said that the bad air quality outside felt unsafe.

“The sky was orange, which was very alarming,” said Rena. “I didn’t have trouble breathing, I just didn’t want to be outside for too long.”

While the cause of the Bobcat fire is still unclear, dry conditions in the Angeles National Forest and a massive heatwave that oppressed Southern California the week of Sept. 6 made it spread effectively, according to media reports.

CalFire says it is over 60% contained, but the fires and bad air quality still poses threat to local communities.

Climate change is also attributed as a major factor in the wildfires, with extreme shifts in weather patterns creating a cycle of ever-worsening fire seasons. Plentiful precipitation causes plants, shrubs, and grasses to grow in abundance, then the heat scorches the vegetation, creating combustible brush for fires that ignite rapidly and spread uncontrollably, resulting in a cycle of fires of increasing intensity.

As clouds of ash and smoke cover the region, dangerous air quality becomes a health concern, especially for those who suffer from preexisting conditions and those who already have the effects of Covid-19 to contend with.

“I have a friend who has asthma, and he can’t open the window or turn the air conditioning on because he won’t be able to breathe,” said Noah Kronsburg.

The air quality index had risen to over 600 in parts of California and Oregon by Sept. 14, making the air quality on the West Coast of the United States the worst in the world.

The sky was orange, which was very alarming. I didn’t have trouble breathing, I just didn’t want to be outside for too long.”

According to Cal Fire, the Zogg fire has rapidly burned through 40,317 acres in Northern California near Redding. The Glass fire north of San Francisco in Napa burned over 36,236 acres.

The deadly El Dorado wildfire in Northern California was started when a family used a smoke-generating pyrotechnic device to reveal the gender of their unborn baby over the Labor Day weekend. Four-foot tall blades of dry grass were ignited by the device, with the family desperately trying to douse the flames with water bottles.

Overall, the West Coast of the United States, from Washington State to San Diego County, has been ravaged by 8,100 fires since the beginning of this year, leaving scars on the map more than twice the size of some East Coast states.