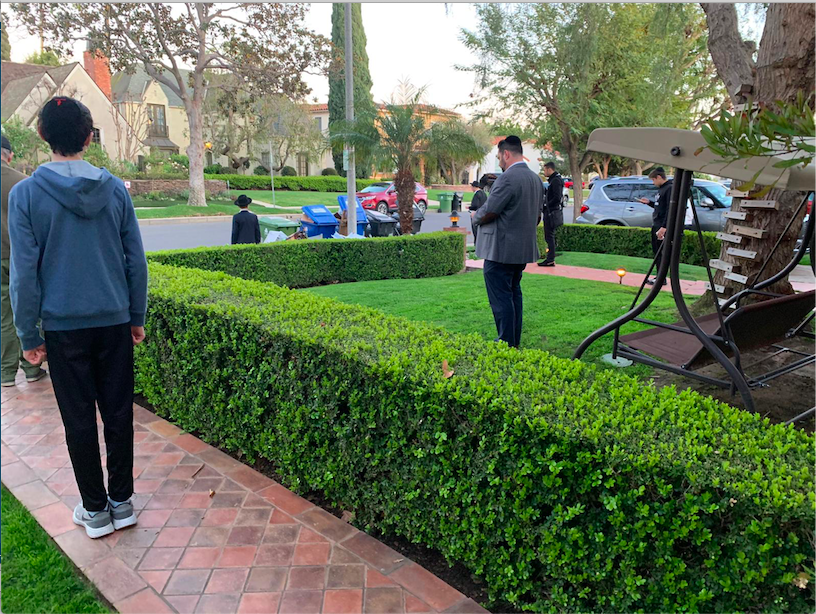 MINCHA: An outdoor minyan observed strict social distancing March 18 in Hancock Park. Officials say that is not permitted in California or Los Angeles, although it will soon be allowed in New York.

Governor Cuomo says New York will allow religious gatherings of up to 10 people. Rabbis here wonder what they might look like as they wait for guidelines.

New York Governor Andrew M. Cuomo announced Wednesday that religious gatherings of up to 10 people will be permitted there starting tomorrow, but Los Angeles rabbis say they have not heard anything about when davening and religious services might be permitted in Los Angeles or California.

Head of School Rabbi Ari Segal said he had been on conference calls with other rabbis in the area and had not heard anything about moves to allow minyans in California so far.

“That’s great news,” Rabbi Segal said when told of New York’s action. “My sense from the people here is that there isn’t a move toward that in the near future, but maybe this is signaling that once it’s more under control, the social distancing has been working and we can start getting back to some semblance of normalcy.”

“All they’ve really told us so far is that they’re working on it,” Rabbi Weiner said. “They’re constantly re-evaluating, and they’re going to keep us posted. But they’re trying to be safe — you know, do the right thing.”

All they’ve really told us so far is that they’re working on it. They’re constantly re-evaluating, and they’re going to keep us posted. But they’re trying to be safe — you know, do the right thing.”

In New York, Gov. Cuomo said groups of 10 or less — no more — could meet to pray, provided social distancing was strictly observed and worshipers all wore masks.

This was met with excitement because a gathering of 10 constitutes a minyan.  Allowing minyans — even with masks and social distancing — means that certain prayers and rituals that have not been allowed since early March can be resumed.

“It’s been very hard,” said Rabbi Segal, whose father died in February. “I was supposed to be saying Kaddish this year and I haven’t been able to. I don’t know how quickly that will make its way to Los Angeles or California, but that’s awesome news.”

Associate Head of School Rabbi David Block said if small minyanim were allowed in California under the same conditions as in New York, Shalhevet might host such minyanim in the school building even if school were closed.

Shalhevet wouldn’t start its own minyan, he said, but if a synagogue asked for assistance with space, he would consider it.

“I would discuss with the team… in terms of what our building can handle,” Rabbi Block said. With government permission and the approval of medical officials, he said, “I think that could be a beautiful thing.”

Rabbi Block said the school would decide who gets to come to the 10 people minyan based on chiuvim, which means obligations in Hebrew.

For example, he said people in mourning who need to say Kaddish, a prayer Jews are obligated to recite regularly for a year to honor loved ones who have died, would get top priority.

Among different Jewish denominations, minyans are counted differently. In the Orthodox world, generally minyans are only formed once there are 10 men in the room, all of whom have had their bar mitzvah.

Thus, if the maximum was set for 10, in an Orthodox gathering women and pre-bar mitzvah males would not be able to join, if the goal was a minyan that was halachically able to run a complete service. 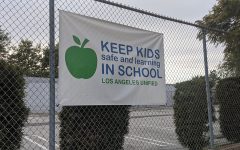 Rabbi Block said he didn’t know what would happen in that situation, but he suggested that a possibility would be separate times for women and men, so men could join a halachic women and women could still gather in prayer, up to 10 at a time.

At Shalhevet, there has been no community davening since March 13, the last day school was open. Sophomore Jessica Melamed said although she loves praying as part of a minyan, she understands why women wouldn’t be able to join.

“I have missed davening in a minyan, especially during this time,” said Jessica. “Community is a really big thing, and as Jews, davening is a really big part of community. Obviously, I’d want to be part of it, but I totally understand why it would only be guys, so that way it would be a minyan”

As for when Los Angeles or California might adopt guidelines similar to those just announced in New York, that is still unclear.

Rabbi Block said he thought it might be a good idea to talk about this with Los Angeles Mayor Eric Garcetti — who is Jewish himself.  But he does not advocate applying political pressure.

“I don’t think anyone should be doing that,” Rabbi Block said.

Meanwhile, as Los Angeles synagogues begin their third month of closed doors and no services, some men in Orthodox neighborhoods have resorted to forming minyanim by praying outdoors.

According to Rabbi Weiner, that is illegal under both state and city laws.

“Rabbi Kraus from Young Israel of Hancock Park sent out an email to his shul yesterday saying that no one should be doing it even outside too,” Rabbi Weiner said late Wednesday. “They’re violating the law.”

Editor’s note: This article has been amended to clarify that if small distance minyanim were allowed by authorities, Shalhevet might assist an existing community looking for space but would not start a new synagogue.   Shalhevet has hosted Ikar congregation on Shabbat, chagim and Tuesday afternoons after school  since the current building opened in 2015.