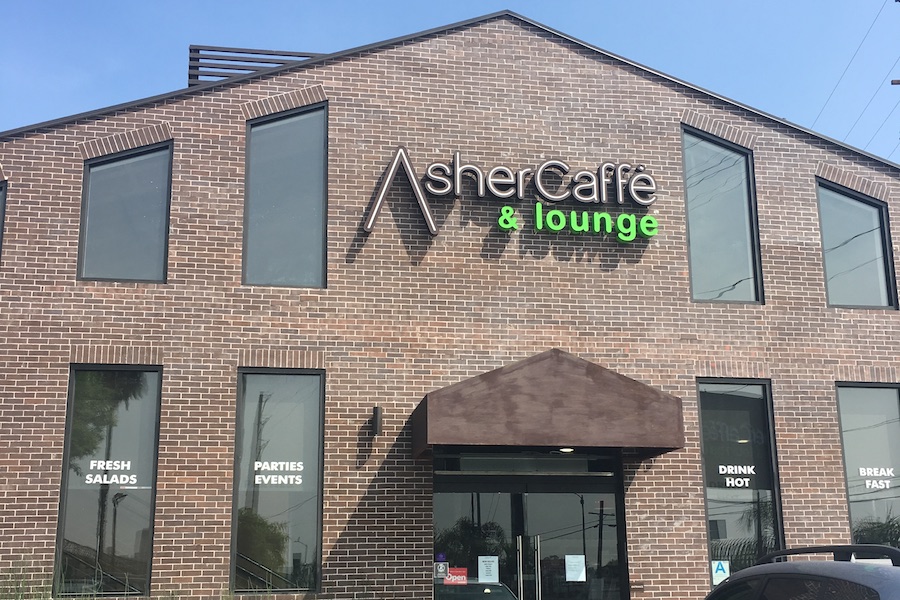 Owner’s Facebook posts exacerbate resentment in neighborhood now home to thousands of immigrants, though he is an immigrant himself

It would have been news anyway: last spring, a new kosher restaurant opened in Los Angeles — not in Pico-Robertson or North Hollywood, but in Boyle Heights, just east of downtown and in the center of one of the largest majority-Latino communities in the United States.

But in mid-July, the story changed. Anti-gentrification protesters stood outside the restaurant complaining that the new Asher Caffe would cause rent and real estate prices in the neighborhood to rise. According to witnesses and live video posted by the protestors, they cursed, called the owner racist and chanted pro-Palestinian slogans.

“They were just out of control, very malicious and banging and throwing things,” said David Shalom, son the restaurant’s owner, Mr. Asher Shalom, and a student at Shalhevet from 2008 to 2010. “The next morning they threw feces at our doors.”

The restaurant experienced three rounds of protesting, all of which were led by a group called Defend Boyle Heights, who were unresponsive to emails and other methods of contact attempted by The Boiling Point. Other publications and media, including the Los Angeles Times and CBS Los Angeles, were also unable to reach the group’s representatives.

The first protest began on July 12, about three months after the restaurant opened, and was followed by a second during the cafe’s Grand Opening event July 16.  The third was Aug. 8 during a joint event the restaurant had publicized with the Orthodox Jewish Chamber of Commerce.

The third round was much calmer.  According to David, this was because media coverage of the first two made both sides want to be seen at their best.

Although the protests mainly had to do with gentrification, there was another main cause.  Mr. Shalom, an immigrant himself from Tel Aviv who moved to the U.S. 30 years ago, had reposted immigration-related pro-Trump sentiments on his personal yet public Facebook page.

“I personally am discouraged by this phenomenon that’s getting bigger where people don’t respect other people’s opinions anymore.

Opponents of his restaurant perceived this to be anti-immigration, and considering the number of immigrants living in Boyle Heights, were upset.

Defend Boyle Heights posted numerous times on Facebook that Mr. Shalom was a Trump supporter, building support for their protests.  For example, on July 12 they posted: “This Gentry business is trying to creep in without folks noticing that their owner is an anti-immigrant Trump loving gentryfier! If he hates immigrants so much, he can stay the [expletive] out of our hood!”

July 18 report by KCAL-9 News on protests  at Asher Caffe.

Someone who tried to bridge the two sides was Mr. Shmuel Gonzales, a Latino Jew who grew up in Boyle Heights and lived there until a year ago. Mr. Gonzales, a tour guide and amateur historian who runs the blog “Barrio Boychik,” spoke at the second demonstration, representing only himself, he said.

Mr. Gonzales said the July 16 protest was put together by many different groups, not just Defend Boyle Heights, of which he’s not a member and whose tactics he doesn’t support.

“We are here today not because this man is opening a kosher restaurant, we’re not here because this is a Jewish business owner or even because of his Israeli nationality, and fundamentally it’s not even about his support of one politician or one party,” Mr. Gonzales said during his speech, as seen on a Youtube video posted on his channel.

“Many of us are here because we object to the injecting of anti-refugee, anti-immigrant sentiments into our community.”

Gentrification, according to Merriam-Webster, is “the process of repairing and rebuilding homes and businesses in a deteriorating area (such as an urban neighborhood) accompanied by an influx of middle-class or affluent people and that often results in the displacement of earlier, usually poorer residents.”

Demonstrators protesting Asher Caffe were worried that it would do just that, by attracting customers from outside of Boyle Heights and serving upscale food.

Laid out in an airy, open space with high ceilings and old brick walls, it has a menu ranging from smoothies and breakfast croissants to specialty salads, flatbreads and paninis.  The restaurant also offers a 10 percent discount to customers who live nearby. Yelp gives it three-and-a-half stars and a price rating of $$ out of $$$$. A Mediterranean salmon burger costs $13.95; a Pink Flamingo smoothie, made from pineapple, pitaya and mixed berries is $6.50.  Coffee drinks range from $2.50 to $4.

There’s also a lounge area with couches and a wifi code, and counters hold displays of merchandise with slogans such as “Make Coffee Great Again.”

Mr. Shalom said he chose the location because it’s across the street from his successful textile and fabric distributor company, Asher Fabric Concepts. But he acknowledged that outside customers make some residents nervous about affordable rents for businesses and housing.

“This is the issue that they have with the prices going up,” Mr. Shalom told the Boiling Point. “They do it to any new business coming here.”

For the business owners, he said, the protests can be frightening, whatever the long-term outcome.

“They are giving them hell for a few months then they leave them alone,” he said. “Very scary.”

According to David, Mr. Shalom had bought the property when it was vacant.  Previously it had been a medical clinic.

“I think my dad was just really hungry one day, so he wanted a kosher restaurant nearby,” David said. “He owns the property and had some good ideas for a cafe and he thought, ‘Yeah, I’ll just do it.’”

The protests against Asher Caffe were not the first to fight change in Boyle Heights.  Centered around Boyle Avenue — where Asher Caffe is located — the neighborhood was Jewish until the 1950s. It gradually became home to Latinos as Jews and other longtime residents moved west and north of downtown.

As neighborhoods from Miracle Mile — where Shalhevet is — and Culver City to Koreatown and the city center have seen construction booms, gentrification has continued to spread. Boyle Heights is becoming desirable to outsiders because of its neighborhood feeling and proximity to downtown.

For the past two years, a coalition of different anti-gentrification groups in Boyle Heights, called the Boyle Heights Alliance Against Artwashing and Displacement, has chased out a several art galleries by protesting.

On Sept. 1, the Los Angeles Times reported that Defend Boyle Heights was protesting a new TV show filming in the neighborhood. Ironically, the show is about the struggle against gentrification, but DBH felt the production company was “exploiting” its anti-gentrification struggles.

In its story about the TV show action, the Times used the protests at Asher Caffe as an example of another boycott and protest the group has executed.

Before the protests began, Shmuel Gonzales visited Asher Caffe and warned Mr. Shalom of possible demonstrations and protests. Since there had been occurrences like this in the past — and Mr. Gonzales knows members of Defend Boyle Heights and follows them on Facebook — he knew what could potentially happen.

“I was like, you do realize there is going to be protests here, this is going to be perceived as a gentrifying business,” Mr. Gonzales recalled in an interview. “He actually dismissed when I tried to explain to him about the anti-gentrification.”

At the demonstrations themselves, David Shalom said he heard rhetoric that had to do with the restaurant being kosher and his father being an Israeli Jew. He heard people screaming “free Palestine” and even “Go home, Jews,” along with a chant, “Gentries get the F out,” which had to do with gentrification.

“It’s a bunch of radical millenials that probably don’t have jobs, and that don’t want jobs,” David Shalom said. “They just troll online all day, and hate America quite frankly.”

At the second demonstration, during the Grand Opening, Los Angeles police officers and hired private security stood between the protestors and the restaurant to usher guests in and out. According to David, some of the invited guests didn’t go because of the protests. When it was time for David and his father to leave the event, they had to drive through the protestors who, according to David, banged on his car.

But demonstrators weren’t the only ones who took offense to Mr. Shalom’s social media postings, which along with his Facebook posts included retweets of President Trump’s on his Asher Fabric Concepts Twitter account. According to Mr. Shalom, after DBH showed the posts to the Boyle Heights Chamber of Commerce, it revoked Asher’s membership abruptly, even before the demonstrations took place.

“I personally am discouraged by this phenomenon that’s getting bigger,” David said, “where people don’t respect other people’s opinions anymore.”

The Boiling Point tried unsuccessfully to reach the Boyle Heights Chamber of Commerce by calling, but found their numbers disconnected, amd also sent three emails with no response.

But the group’s president, Jennifer Lahoda, gave a statement to the Boyle Heights Beat.

“We rescinded his membership Tuesday because of public statements he made regarding immigrants that are not in line with the chamber’s values and objectives,” Ms. Lahoda said. The Chamber of Commerce announced that they would not be attending the cafe’s opening ribbon-cutting ceremony.

Mr. Gonzales supported Chamber of Commerce action, because he thinks it’s wrong to use a business account to post political opinions.

“Everyone has their own private views, but most people don’t try to tie it into their actual business account,” Mr. Gonzales said. “The Twitter stuff kind of hurts his reputation. When using your actual business account for spreading these types of things, you’re endorsing those ideas and that negativity with your business. I really would have hoped that he would have come in with a little more poise.”

Mr. Gonzales did not like every aspect of the protests. He considers himself “stuck in the middle.” According to him, the protesters are young and not very disciplined. 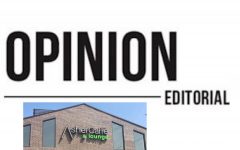 We were strangers in the land of Egypt

“My hope is to mediate in this,” he said. “Hopefully both sides will want to deal with real issues, instead of pushing petty politics that is divisive and destructive.”

He said that there were people not involved with DBH who came from outside with their own “vendettas” and said some things that weren’t acceptable. Mr. Gonzales thinks DBH should have ejected those people.

During the second protest, David heard people using the word “pedophile” in their chants — a reference, he said, to his father’s Facebook posts relating immigration and and to the fact that they support ICE, the U.S. Immigration and Customs Enforcement, which has separated migrant children from their parents.

To Mr. Shalom, though, it’s an ironic turn. He employs around 70 immigrants from all over the world between his factory, operations and cafe, and is an immigrant himself. According to his son, he believes the system should be compassionate toward immigrants. He told the Boiling Point that he had Syrian refugees in mind when he put out the controversial post, which had to do with him being from Israel and fears in that part of the world.

“Hopefully both sides will want to deal with real issues, instead of pushing petty politics that is divisive and destructive.

“Some of the employees have been with us for 20 years and they love my dad, my dad loves them,” David said. “My dad’s all love, all peace, that’s what he’s about. Our last name means Shalom, which is peace.”

And the restaurant has found support. Nationwide publicity — Asher and David made an appearance on Fox News, for example — have led people to call them in support and even to order food, knowing it won’t be sent to them but rather as a donation, David said.

Additionally, checks have come in from people from around the country including Alabama, Texas and New Jersey.

On balance, David thought the protests helped rather than harmed their business.

“It definitely helped,” he said.