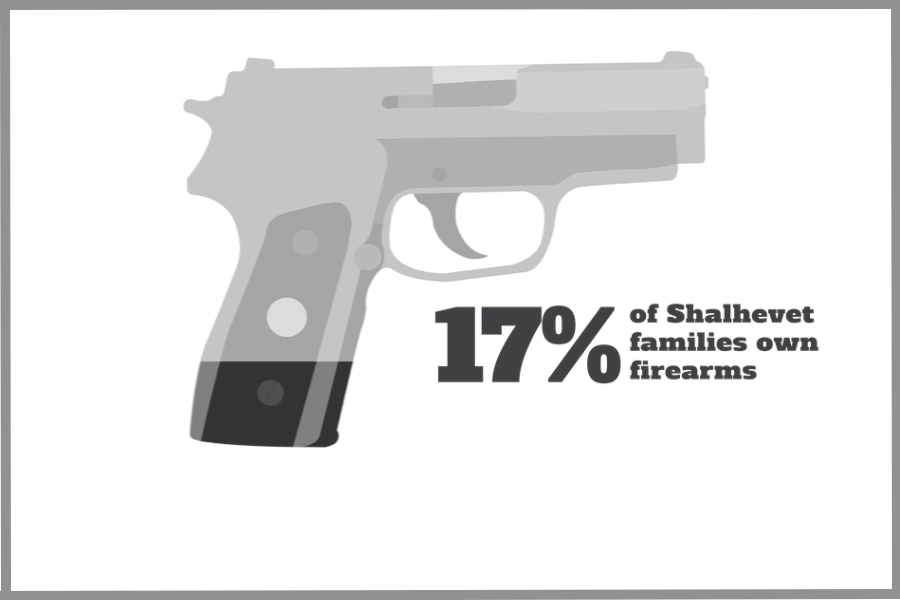 School’s gun owners lock them away

By Tyler Ekaireb, Outside News Editor

Seventeen percent of Shalhevet students have firearms at home, 99 percent of whom know where they are kept and all of whom say their guns are under lock and key, according to a Boiling Point poll.

The poll, taken at the end of November, 2017, also found that 32 percent of students have family members trained to use firearms, perhaps reflecting U.S. or Israeli military training, though the poll didn’t ask about that.

And 96 percent of students agree or strongly agree that people should be able to own guns, most citing self-defense and sport.

Not that the subject seems simple to them, however.

“I personally like that we can own guns and am in favor of keeping that legal, but I really don’t know if it is right,” said senior Maya Schechter, whose family owns multiple firearms. “It makes me feel safe to have guns in the house.”

According to a CBS News poll, nationally about 30 percent of households owned firearms in 2016, the lowest in almost 40 years.  Gun ownership reached a peak of 53 percent in 1994, the same poll showed.

According to Gun Violence Archive, more than 15,000 people were killed with guns in the U.S. last year alone, 434 of which were accidental. Such statistics may explain the 69 percent of Americans who, according to pollingreport.com, believe Congress needs to do more to reduce gun violence.

According to a Pew Research Center study, 67 percent of gun owners say that safety was a major factor in their purchase.

During a church shooting in Texas early last November where 26 people were killed, two passersby engaged the assailant and returned re; in this case, armed ci- vilians were able to save lives in the face of gun violence. President Donald Trump praised the men for preventing more bloodshed.

But even supporters of Americans’ right to bear arms wish to see reform of our current gun laws.

Senior Aidel Townsley thinks it is important for individuals to own rearms for protection, but is disturbed by their widespread availability.BP Graphics by Zev Kupferman

“I think that the laws should de nitely be stricter when it comes to [checking gun purchasers for] mental illness,” Aidel said.

“I don’t think that people with a history of mental illness should be allowed to own guns.”

A recent Gallup survey revealed that 60 percent of Americans share the opinion that laws regarding the sale of rearms should be made more strict.

However, there is little consensus regarding how to do so. Some suggest more strin- gent or universal background checks such as e Coalition to Stop Gun Violence, and others wish to ban guns entirely such as Pheobe Maltz Bovy of New Republic.

“I think there should be a better vetting process and heavy regulation against pur- chasing ammunition,” said senior Aaron Silverstein.

Like Aaron, many individuals are in favor of limiting the sale of ammunition and more powerful rearms, such as assault or semi-automatic rifles.

The National Rifle Association spent $58 million on political campaigns and lobbies in support of gun rights last year, compared to under $5 million in 2006.

The NRA has been proudly advocating all manner of weaponry since 1871, and rmly believes in citizens’ rights to bear arms under the 2nd Amendment.

The latest evolution of the NRA began in the late 1970s with a change of leadership, when the organi- zation pushed a more assertive advertising campaign. By the 1990s, NRA ads had transformed from celebrity endorsements to politically charged banners, criticizing individual politicians alleging a liberal war on guns.

But these developments are a reversal from the organization’s historical role. In the 1930s, the NRA was involved in drafting the rst federal gun control regulations.

On the opposing side, Everytown for Gun Safety spent just $1 million lobbying last year to pass stricter gun control legislation. ough not as large as the NRA, its role in the pro-gun control battle is growing. Everytown now has approximately three million members, compared to the NRA’s ve million, and received a $50 million donation in 2014 from former New York Mayor Michael Bloomberg.

Complicating matters is what many consider to be vague language in the Second Amendment to the Constitution, which states: “A well-regulated militia being necessary to the security of a free State, the right of the People to keep and bear arms shall not be infringed.” What, for example, is a well-regulated militia?

“The Second Amendment is archaic at this point because there isn’t a power that will come take over, there isn’t going to be a revolution,” said science department chair Mr. Pavel Lieb, whose relatives own guns, but who has decided not to himself.

The American Public Health Association sees gun violence as a public health cri- sis, a topic covered extensively in their American Journal of Public Health. One such publication, entitled “An Agenda for Action,” outlined a comprehensive approach to reduce gun violence.

“Representatives of 42 public health schools and programs from 22 states and 17 leading public health and gun violence prevention advocacy organizations convened […] to develop an action agenda for academic public health around the rearm injury crisis,” the AJPH wrote in December of 2016.

The researchers drafted a multifaceted approach, including increased research, public health initiatives, and plans to encourage the private sector.

Embracing this perspective would mean handling gun violence in the same man- ner as typical public health matters, such as obesity, smoking, or cancer.

However, little health research has been done on gun violence due to a 1997 Congressional ban on the advocacy or promotion of gun control by the Centers for Disease Control and Prevention.

e ban has been met with harsh criticism as funding for public health research outside of the CDC declined concurrently, according to the Washington Post.

Following mass shootings and publicized gun deaths, politicians and citizens alike debate over issues of gun control and regulation. But many find it difficult to do so effectively with the little research and scientific evidence available in support of any conclusion.