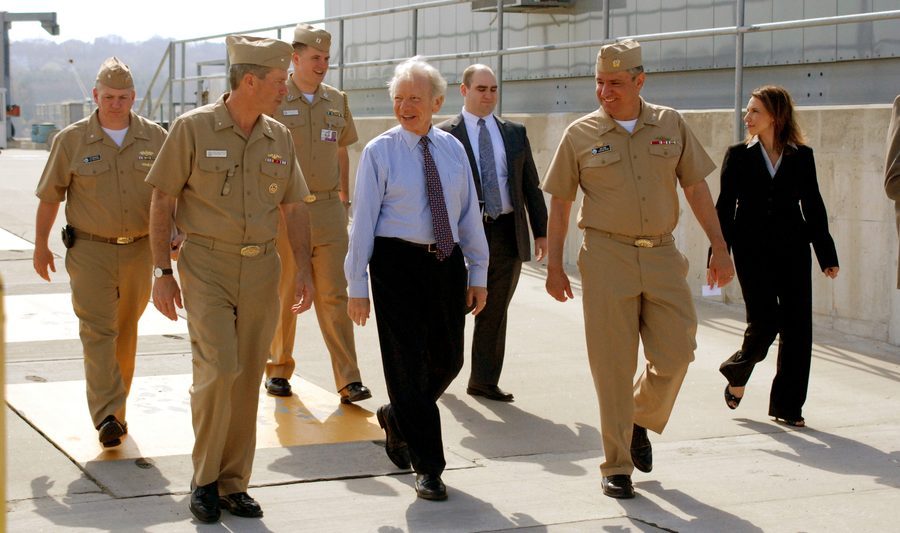 Q & A with Senator Joseph Lieberman

Al Gore's running mate says he would have observed Shabbat as vice president, and that Jewish law would have allowed exceptions when necessary. He also describes being Sen. Barrack Obama's mentor when the future president was first elected.

Sen. Joseph Lieberman served in the United States Senate from 1988 to 2013, representing the state of Connecticut where he was born. He started his career as a Democrat, but later became an independent.

In the election of 2000, Sen. Lieberman was chosen to be the Democratic running mate of Vice President Al Gore, the first time a Jewish American had run on a national party’s presidential ticket. They lost the closest election race in U.S.history, winning the popular vote by 544,000 votes but losing by five electoral votes after a close race in Florida – ultimately decided in the Republicans’ favor by the Supreme Court – gave the electoral college majority to George W. Bush and Dick Cheney.

Senator Lieberman is a Modern Orthodox Jew and attended Kesher Israel Congregation while in Washington, D.C. He now works for the New York law firm of Kasowitz, Benson, Torres & Friedman.

Boiling Point: What were your feelings about being the first Jewish candidate on any presidential ticket?

Sen. Lieberman: I feel very grateful, very honored and also I had a sense of responsibility to make it work — in other words, to conduct myself in a way that people would say win or lose, they did not lose because there was a Jewish candidate on the ticket. And I feel good about how all that happened.

Just to go back to the gratitude, I had and always will have a lot of gratitude to Al Gore, because the choice of a vice presidential running mate is totally by the presidential nominee.  And Gore had the confidence not only in me, but [in] the American people — that they would be ready to have a Jewish candidate running for one of our top two offices, and that that [would] not mean the ticket would not win.

And of course the fact that we got 544,000 more votes than the other ticket, regardless of that electoral college, is proof that he is right.  Until election night it was just a great experience.

BP: If you had been elected as vice president, do you think you still would have kept Shabbos?

Sen. Lieberman: Yes. I would have kept Shabbos, with the exception that when there were public responsibilities associated with being vice president, that I would do them. I think there is a body of Jewish law that makes it clear that people in positions of responsibility that have to do with the well-being of the community, and particularly the security of the community, in a sense have a higher obligation to fulfill those responsibilities than to carry out every religious requirement for Sabbath. I never had any concern about that, and Vice President Gore did not either.

“I think there is a body of Jewish law that makes it clear that people in positions of responsibility that have to do with the well-being of the community, and particularly the security of the community … have a higher obligation to fulfill those responsibilities than to carry out every religious requirement for Sabbath.”

BP: When you were in the Senate or just politics in general, was it ever difficult to be in politics and balance that with being Jewish?

Sen. Lieberman: The bottom-line answer is no, it was not hard to balance my Jewish life with my public life.

Does it take work sometimes? It does. For instance, I always said from the beginning of my career as a state senator way back in the 1970s that I would not do any politics on Shabbat, but I would to the best of ability fulfill all of my public responsibilities, because I thought that was my obligation.

I was pretty much always able to do that. For instance, when I got to the Senate I really made a commitment that I would never miss a vote on a Shabbat. Does that mean I had to make an effort, did sometimes I walk the four-and-a-half miles from my house to the Capitol or back? Yes I did. But it was not that big of a deal, and I was able to do it and I thought it was important to do it that way.

I do feel very strongly — and I will say it to you because you are young, Jordan — is that we are in a wonderful country where young people Jewish or otherwise, should feel, or any religion should feel, that they will never have to forsake their religious observances to achieve their secular career goals. This is a country that has become very diverse and very accepting in many ways.

BP: While you were on the campaign, of course you met many people from many different backgrounds. What was it like to meet many Americans?

Sen. Lieberman: People are people and people were wonderful.  One of the Secret Service people who was with me and in other campaigns he said he has never seen so many people say to the candidate: “God bless you.”  [He said], “You know I think most of them are not Jewish, so I think it is Christians telling you that they respect your religion.”

And that in a way that was a real common bond.

The people of the country are diverse and welcoming. I know there is a lot of news today, which I do not like, about anti-immigrant feeling and certain rise on the right and on the left to of either ethnic or racial bigotry. But I think fortunately that is still a fringe group and the basic American ethic of the overall majority of the American people is accepting and tolerant.

I learned from parents to treat everyone with respect and listen, and do not think you know more than anybody. The person who has a less important job than you may be more of an expert at something than you are, so you can learn and that is what I tried to do with my campaign, including the national campaign.

He certainly treated me with respect. I will tell you a little story: They had a program where they asked each of the senators to have one Democrat and one Republican be their mentor, in an effort to create bipartisanship. And Senator Obama asked me to be his mentor, and that meant a lot to me.

BP: What was that like working with President Obama and being his mentor?

Sen. Lieberman: Well, one of the things I discovered was that he did not need much mentorship! He was and is quite gifted. Very good with people, very smart, very hardworking. Civil man, you know? A gentleman.

We talked about some of the rules of the senate, I do not mean the rules, not the parliamentary rules. But I would counsel him on how to be effective, and part of that was making friends not only among Democrats but among Republicans, because in the end you cannot get

anything done when you do not have some support from the party other than the one you’re in.

… And I would say he was a very good student. He did not need much teaching.

BP: What are your thoughts about Prime Minister Netenyahu’s support of then-ccandidate Trump,, and now of President Trump? Do you think he was making a mistake in that regard or do you think he is doing the right thing?

Sen. Lieberman: I think Prime Ministers and Israeli politicians ought to stay out of American elections and then try their best to have very good relationships with whoever wins those elections, obviously at the presidential level. So I think Prime Minister Netenyahu would say, and others would say, that he never supported President Trump and I don’t think he really did. He had a pretty good relationship with the Clintons also.

He clearly has a comfortable feeling now that Trump’s in office [and is comfortable] with President Trump, and I hope it lasts because it is good for America and Israel.

BP: What advice would you give today to high school students? Should they consider going into government or politics?

Sen. Lieberman: I could look back at it — I was 40 years old when I took office and I started with some hopes and dreams, and I was really blessed to realize a lot of them and to have the opportunity to hold offices in which I could get things done and to make things better for people.

I would say you have to be ready to work hard, but it is worth working hard, because you can have an enormous impact on the community you live in or the country you live in.

I would say that sometimes young people tell me that they decide that they want to be in public service and they say what should I do, and I surprise them by saying that first, read as much history and biography as you can, so that you can understand what went before you and you can have some specific idea of the impact a leader can have for the good or bad. In your reading, You may develop some heroes or mentors in history.

And if you are still interested, go out and start getting involved. And I can tell you this from my own experience: be ready to take a risk and run for something where you can lose, because that Is the only way you can make progress in any career.

BP: While you were in the Senate or other office, can you tell me a mentor or two that you had?

Sen. Lieberman: Yeah. That’s a great question. President Kennedy was a great inspiration in my life, but I was only a kid when he got elected.

There was a man named Abraham Ribicoff, who was a Governor and Senator from Connecticut. He happened to be Jewish and is a hero of mine. When he got elected, I got to know him and he became very important to me in that way.

But honestly some of the things I learned, most were from my contemporaries. I wouldn’t say that they were mentors, but John McCain and I became very good friends, and I have the greatest admiration and affection for him, and just by his public service and commitment to our country, he taught me a lot.