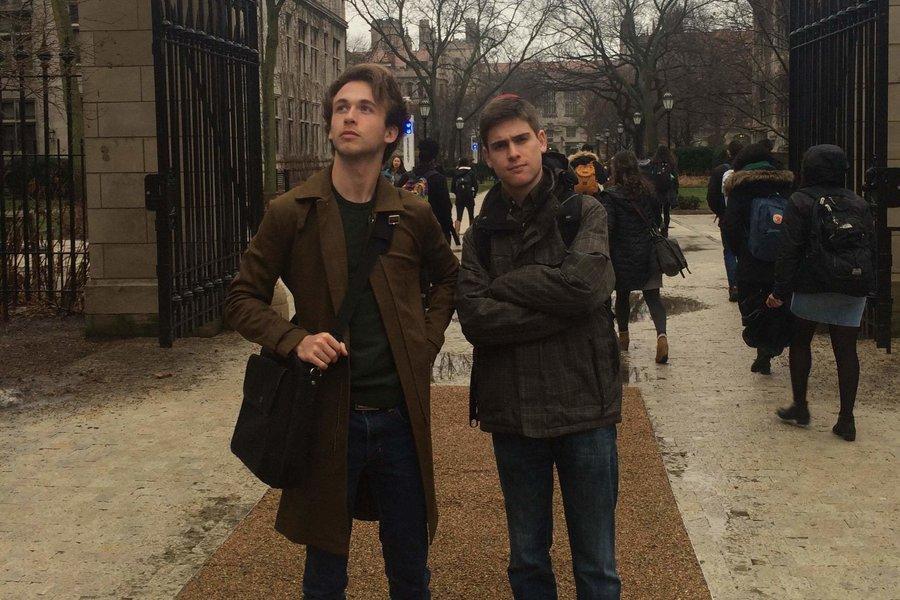 VALUES: Alumni David Lorell, left, and Daniel Steinberg, freshmen at the University of Chicago, say the openness there reminds them of Shalhevet. (Courtesy of David Lorell)

VALUES: Alumni David Lorell, left, and Daniel Steinberg, freshmen at the University of Chicago, say the openness there reminds them of Shalhevet.

Alumni say U Chicago is safe even without ‘safe spaces’

Last summer, the University of Chicago sent out a letter to incoming freshmen telling them not to expect their professors to warn them that an upcoming topic could trigger anxiety, flashbacks or other problems.  Students would also not be allowed leave a lecture and meet at a “safe space” when they feel the topic at hand is uncomfortable.

Instead, they were told, professors will teach the material they consider appropriate.

But the result apparently has not been too jarring so far, the alumni said.

“There aren’t any closet lunatics screaming what they want,” said David Lorell ‘15, currently attending his first year there. “The students seem civil.”

Trigger warnings, according to Shalhevet Director of College Counseling Aviva Walls, are warnings given in many universities when professors are about to discuss material that may provoke traumatic memories or anxiety in some students.

Safe spaces, she explained, are designated rooms where members of particular groups can go in the case of “micro-aggressions,” which are slightly biased but not derogatory statements.

Both have become increasingly common on college campuses and in some high schools as well, though not at Shalhevet.   Shalhevet did host a Town Hall on the topic a couple weeks after the Chicago letter was sent out.

David Lorell and fellow alumnus Daniel Steinberg, also ’15, are both freshmen there and shared what they know based on the little time they’ve spent at the school.

“Because I wasn’t here [before the policy change], I can’t really tell how the school is different,” said Daniel.  “But it hasn’t changed anything, according to the upperclassmen.”

Everything else, except perhaps for the school’s public image, has remained the same, they said. Safe spaces or areas to go when and individual or group feels uncomfortable are still present on campus organized by clubs and Student Council instead of by the school administration.

The letter’s intent was not to ban safe spaces and trigger warnings, according to Geoffrey Stone, chair of the University’s Committee on Freedom of Expression, but rather was about the administration not wanting the students to shy away from class and instead be open to classes and listen to certain subjects they normally would avoid.

“The right thing to do is empower the students, help them understand how to fight, combat and respond, not to insulate them from things they will have to face later,” Prof. Stone said in an interview with the Chicago Tribune last summer.

Daniel and David believe that overall, the University of Chicago does not differ drastically in terms of policy from other colleges. It’s just that it is now known for supporting unimpeded speech and may draw in more media and students interested in those values. David added that some of those values remind him of Shalhevet.

“Shalhevet and University of Chicago are very similar,” said David, who is the older brother of junior Daniel Lorell. “Among the students there are lots of ideas that can be talked about. It’s the general culture of the school, very progressive.”

U. Chicago’s new policy was the subject of an October Town Hall.  Junior Maya Schechter said she liked it.

The conversation during Town Hall bounced around from questioning whether people should be able to say whatever they want to whether everything or anything should be censored at all.

“It’s absolutely true that the mark of education and who you are is your ability to hold an opinion in your mind that you disagree with,” said Judaic Studies teacher Rabbi David Stein that day. “We have Town Hall so we can be exposed to these ideas. We do better when we know opinions that aren’t our own. There’s a difference between attacking a person and attacking a person’s ideas.”

Meanwhile, and despite the media attention coming its way, the University of Chicago would like to end the discussion.  When the Boiling Point asked to interview Dean of Students John Jay Ellison about the controversy, he replied this way:

“I am not speaking with people outside of our campus about this since my letter was written to, and intended only for, our students.” Dean Ellison wrote in an email.