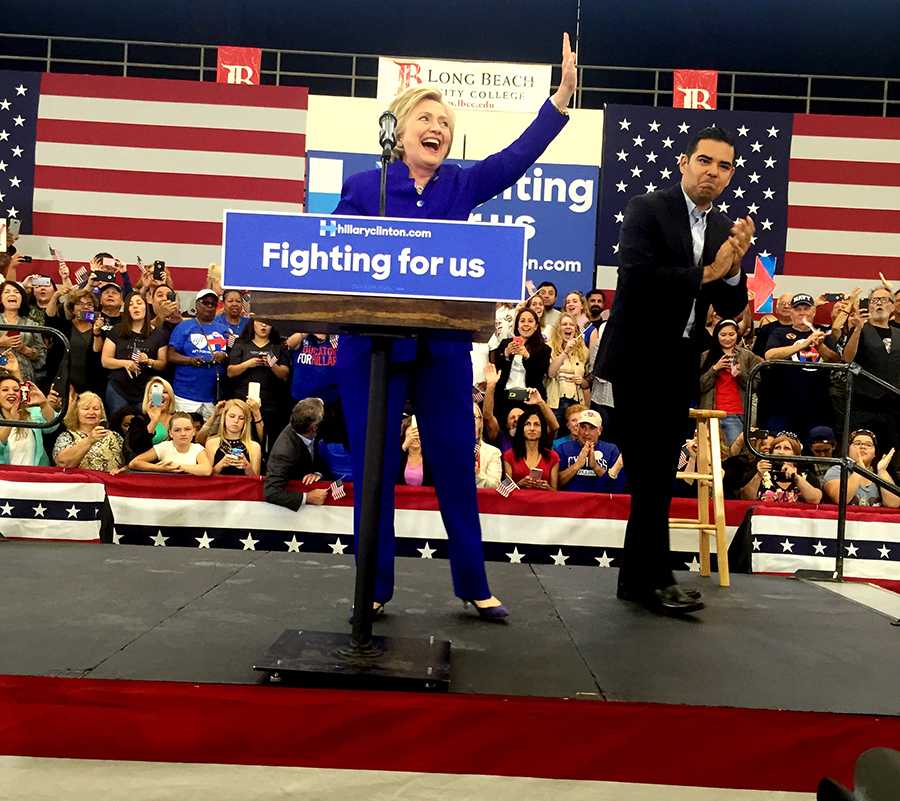 CLINCH: Above, former Secretary of State Hillary Clinton celebrated at Long Beach City College June 7.  She had just learned she had enough delegates to win the Democratic nomination for president, becoming the first woman to do so. BP Photo by Layla Galeck

Former Secretary of State Hillary Clinton was in Southern California June 6 when the word came from the Associated Press that she had clinched the Democratic nomination for president, becoming the first woman to do so in U.S. history.

Shalhevet junior Layla Galeck was there when she celebrated – at a primary-eve rally at Long Beach City College, one of the last scheduled for what has been a bruising primary contest between the former first lady and Sen. Bernie Sanders of Vermont.

“They were out of control,” Layla said in an interview. “Screaming, cheering, Hillary could barely finish her sentences without people freaking out — crazy energy.”

With 475 delegates at stake and Sen. Sanders trailing by 309, California became a state that was fought over this year, and both Clinton and Sanders held rallies that were attended by Shalhevet students.

Layla was near enough to the front that she got to shake Mrs. Clinton’s hand and take a selfie with her.

“It was surreal,” said Layla. “I couldn’t believe that one of the most influential figures in American politics today was so close to me.”

Layla’s grandmother is very close with Eric Bauman, longtime chair of the Los Angeles County Democratic Party and vice chair of the state party, so Layla was on the VIP list and among the first to enter the room where the candidate would speak.

“I told Hillary that I’m very close family friends with Eric Bauman, and she said, ‘No way!”” Layla said. “And then I told her she’s amazing and she said thank you and we took a picture.

“I was nervous to meet her but she was very nice and sweet when I spoke to her,” she added. “The whole experience didn’t feel like real life.”

At the rally, Clinton used the spotlight to state her positions on the issues, and urge people to vote the next day.

“According to news reports, we’re on the brink of a historic moment here, but we still have work to do,” Mrs. Clinton said.

She called herself “a progressive who gets things done” and touted plans to install 500 million solar panels by 2018 and power all homes with renewable energy by “the end of my second term,” 2024, to fight global warming.

She promised to raise the national minimum wage, decriminalize drug addiction, improve Obamacare and convince companies to manufacture in America, and close the gender wage gap.

Equal pay for women, she said, was the “fastest way to improve incomes for families.”

“We’ve got work to do, but there’s nothing we can’t do if we work together to do it,” she added.

According to Layla, the Secretary had the attitude that “she already had it in the bag.” Regarding Clinton’s opponent Bernie Sanders, Galeck said “I don’t even remember her mentioning Bernie so much, like maybe once if that.”