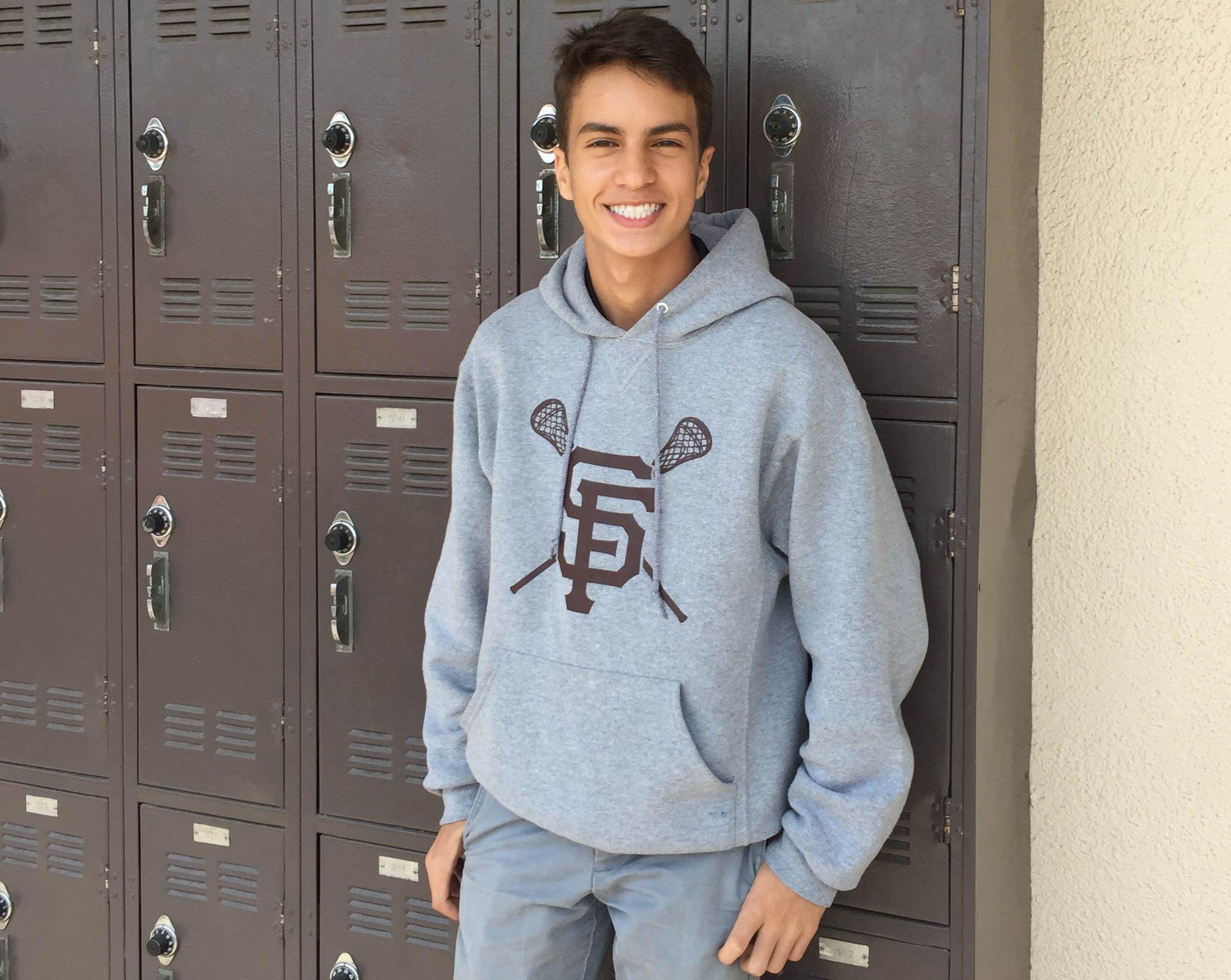 Amr Eissa, a sophomore at St. Francis High School in La Canada, was asked if he belonged to ISIS when he wore a sweatshirt with Arabic writing. (Photo Courtesy from Amr Eissa)

Amr Eissa, a sophomore at St. Francis High School in La Canada, was asked if he belonged to ISIS when he wore a sweatshirt with Arabic writing.

Individual experiences vary, but all are making decisions based on how they will be treated in public in current climate of fear

Have you ever worn a sweatshirt with Hebrew writing on it, or wrestled with whether to wear your kippah outside of school?

Here’s what happened when Amr Eissa, a sophomore at St. Francis High School in La Canada, decided to wear a sweatshirt that said “Nothing lasts forever”: he was confronted by a person who asked if he supported ISIS.

“I was wearing a sweatshirt that had Arabic writing on it in public,” said Amr, “and I was out ice skating with friends, and a kid came up to me and said, ‘Is that an ISIS sweatshirt? Are you a part of ISIS? Do you support ISIS?’ And I had to talk to him and say no, it’s just an Arabic sweatshirt.”

With terrorism escalating in the United States and Europe, Muslim teenagers in Los Angeles have been exposed to mounting anti-Muslim rhetoric and behaviors where they live. Much of it seems to depend on what they wear.

ISIS stands for Islamic State in Iraq and Syria, and its spate of attacks in Europe along with November’s attack at the Inland Regional Center in San Bernardino have led Americans to become increasingly frightened of Muslims as a group.

But to Muslims like Amr, Islam is just – Islam, their religion, and opposes violence and terror. Some teens are more religious than others, and those who want to practice it struggle to do so in Los Angeles.

Muslim women and girls sometimes decide to wear a headscarf, or hijab – literally, a veil — which covers their hair and neck as a sign of religiously mandated modesty, according to beliefnet.com. But doing so identifies them as Muslims to people who might be hateful or afraid.

“If I leave the house ever wearing a hijab on my way to the mosque, I am terrified and I get these looks that I never get otherwise,” said Glendale High School senior Zehra Siddiqui. “You just feel so much hatred, and that’s something that’s definitely growing in America.”

Zehra and other Muslim students interviewed by the Boiling Point believe both hatred and fear are increasing.  As a result, it has been difficult for them to wear traditional Muslim dress in public and to travel through airports. At their schools, however, they have not faced racism aside from a few instances.

Zehra now only wears her hijab at certain times.

“It wasn’t a big deal until I started noticing looks and no one would help if I needed anything,” Zehra said. “It seemed like everyone was keeping their distance for someone reason which is crazy to me. I barely leave the house with it now; I wear it at the mosque. If I’m driving there I won’t have it on anymore, I’ll wait until I get there.”

Pasadena City College freshman Jasmine Wadalawala thought she would wear the headscarf when she entered college, but then changed her mind.

While they worry in public, they have not had to fear at their schools, which so far have felt safe and as accepting as before.

“I haven’t been treated differently because that’s just the environment that I’m in, so I haven’t had to deal with anything,” said Zehra. “I see online that other people have to deal with things, but I’m really lucky that I don’t necessarily have to deal with people who are actively against me or bashing me and my religion.”

Amr said he’d never faced hate or bigotry there at all, and Mahek Ahmad, a sophomore at Flintridge Preparatory School, had the same experience.

“Nobody ever questions the fact that I don’t eat pork or I don’t wear clothing that reveals my skin as much as other people do,” said Mahek. “People at my school are very accepting of the fact that I choose to live my life a certain way and I have my own beliefs and my own practices, and I think everyone at my school has been very respectful of that. I’ve never really been discriminated against for any of those reasons.”

But Jasmine had. In ninth grade, she said, a friend told her that the Koran tells Muslims to commit acts of terror like blowing up buildings, but Jasmine disagreed – to no avail.

“I didn’t want to confront her at first,” she said in an interview, “because I was going through a time where I was trying to find my Muslim identity, and I was scared of what people would think and what people would say when I was more open about it. So I defended Islam as a third party.

“She was stubborn when I explained that killing is not allowed in our religion and Islam is a religion of peace,” Jasmine continued. “After I said, ‘have I ever hurt you? I’ve been a good friend to you, have I not?’ she agreed, and I told her I’m Muslim and I’ve been sitting next to you in class all year and I’ve never once tried to hurt you.

“I hoped for a positive response, but what happened is she turned back to our lesson and ignored me until this day.”

Traveling is another problem area for L.A. Muslims, because of profiling techniques used by Transportation Security Administration officials.

Although she was just seven or eight at the time, Zehra has a vivid memory of when she and her dad, returning from Pakistan, were taken into a room for questioning at an airport.

“We were heading to the next gate and my dad was pulled aside. I was way too young to really understand what was going on,” said Zehra. “I was sitting next to my dad and he was getting questioned. ‘Why are you traveling? Why do you have an extra suitcase?’ I didn’t think anything of it because I was too young and obviously when I got older I’m like this is something that probably should not have happened and happened for no reason.”

Whenever Amr travels at airports he has a similar experience.

“My mom wears the headscarf so they always pull her physically to the side, and they’ll pull my dad to the side too,” Amr said. “ Once when I was flying alone I got pulled to the side. In light of events we’ve had throughout the world, I can see why they would be a little bit suspicious, but it’s really horrible that’s it’s become such a generalized stereotype that a student wearing a headscarf or anyone that seems Arab or Muslim is pulled to the side and seen as a potential threat.”

There are also experiences they’ve heard about from others, which combine together to convince them that the problem is getting worse.

“People are getting injured and people are being assaulted on the street for looking stereotypically the part,” said Jasmine. “A Sikh Temple that I visited a couple of years ago was vandalized and had terrible things written on the walls and that’s not even the right religion. These things do scare me because you don’t know who’s going to be next.”

Some think the rising hatred stems from 9/11 and other terror attacks committed by Muslims, while others believe it is the constant stereotyping of Muslims on the news.

“Ever since the attacks on 9/11 there has been a huge emphasis on the fact that everyone is an extremist and that has led to many things like racial profiling,” said 10th grader Mahek Ahmed.

According to the students who spoke to the Boiling Point, there are various reasons for hatred of Muslims.

“People are looking for a scapegoat and Muslims have become that scapegoat,” said Zehra. “I think all Muslims are being dehumanized.”

Jasmine attributed rising animosity towards Muslims to the local attacks.

”When things happen like San Bernardino, people get scared because you’re put into that situation where it could be you next, and so people are definitely becoming more and more scared,” said Jasmine. “I understand you wouldn’t want to be around Muslims because it’s under the name of Islam, which is wrong, but that’s the way it is and that’s what’s happening.”

“The only time they really ever mention [Muslims] is Muslim terrorist attacks’ or Islam promotes violence or death or this and that,” said Amek. “If there are other school shootings or anything that isn’t done by a Muslim they don’t specify religion.”

“I think that stereotyping billions of people around the world into one category is extremely irrational,” Mahek said. “There’s just a really big misunderstanding in the community within California, within the United States and within the entire world, where people are accepting these stereotypes without contemplating the impossibility of it.”

“It could have been very hidden and underneath the surface, but then someone like Donald Trump comes in it gives these people a voice and someone to look up to,” said Zehra. “It’s not Trump that scares me. What scares me is how many have come out with ideas that are supporting Trump and seeing that there’s so much hatred still for people that aren’t white Americans.”

Mahek said American Muslims should be seen as a cause for hope.

“A person who says an entire group of people is one thing really isn’t looking at the bigger picture of things, and that genuinely worries me,” said Mahek. “I am a Muslim in the United States who is of this new generation that is going to try and calm that idea that all Muslims are terrorists and that people need to stop accepting all these stereotypes.”

The teens said they were hopeful that things could change, and had a few suggestions.

“People need to reevaluate the way they judge people,” said Mahek. “A lot of the people who are racially profiling people and stereotyping people are just scared and they project it in a way that’s irrational.”

Jasmine believes people must speak up and talk about the issues – in public discourse and in schools.